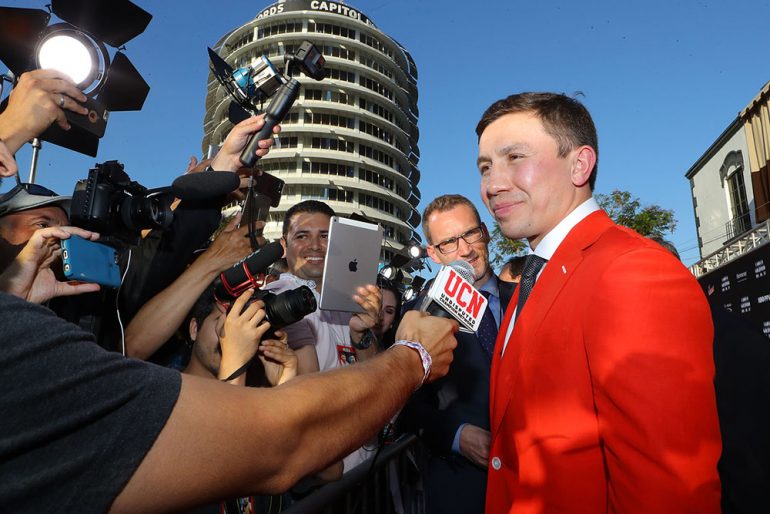 Contracts were executed in the early morning hours Friday on a six-fight deal with DAZN that will pay the former middleweight champion eight figures per fight, industry sources told The Ring. The partnership announcement is expected at a news conference Monday in Los Angeles. GGG will make his DAZN debut in June and compete twice a year under the three-year deal. 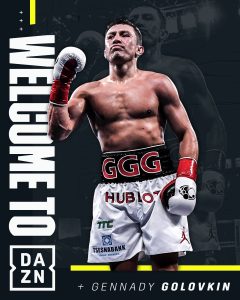 Golovkin (38-1-1, 34 knockouts) is now a global ambassador for DAZN, joining the likes of rival Canelo Alvarez (whom he’ll fight in September if The Ring middleweight champion defeats Daniel Jacobs on May 4), and soccer stars Cristiano Ronaldo and Neymar.

The pact also guarantees the 36-year-old Kazakh two cards a year for his company, GGG Promotions, that don’t include his own fights, starting in 2020 and spanning into 2021.

The signed deal wraps up a marathon courting process for GGG from several suitors that began in October after it was announced HBO was terminating its boxing programming. PBC pursued Golovkin with a two-fight deal that would guarantee the 36-year-old eight figures per fight and a pay-per-view showdown with Jermall Charlo.

ESPN was in the hunt, too, but the network withdrew from the process in January. In the end, DAZN, backed by billionaire Len Blavatnik, wooed Golovkin with a lucrative four-fight deal and the chance to fight Canelo Alvarez a third time in September, assuming The Ring middleweight champion gets past Daniel Jacobs on May 4. Golovkin was also attracted by the opportunity to purchase equity in the fledgling streaming service.

Golovkin’s pact follows Alvarez’s record-breaking deal with DAZN signed in October for 10 fights and $350 million. With middleweight titleholders Jacobs and Demetrius Andrade also fighting exclusively on the platform, it was a natural fit for The Ring’s No. 1 fighter at 160 pounds to fight there, too.

The Ring reported on February 24 that GGG and DAZN were “on the one-yard line” in talks to bring the fighter exclusively to the platform, but there were still minor issues to work out.

DAZN executive chairman John Skipper and Hearn held several meetings with Golovin in Los Angeles (GGG resides in Santa Monica) over the past few months. The package from DAZN was always the most lucrative, but GGG was enticed by the greater exposure from PBC, which holds a four-year deal with FOX, per sources.

GGG has been directly negotiating with DAZN ownership recently after Hearn took a step back, per sources. With Golovkin headed to DAZN, it’s another indication the platform is deeply committed to boxing as they become an even bigger player in the space.

The Olympic silver medalist, with his megawatt smile and popular one-liners like “Big Drama Show,” became a bona fide star after debuting on U.S. television with a knockout of Grzegorz Proksa in September 2012. He sold out Madison Square Garden several times as the A-side — most notably in wins over David Lemieux and Jacobs — and is an attraction in Los Angeles as well. The power-puncher from Kazakhstan once reeled off 23 consecutive knockouts with the majority of them coming in title defenses.

He finally secured the sort of high-profile fight he was seeking when he met Canelo in September 2017. The fight ended in a controversial draw; the majority of fans and media believed GGG deserved the decision. The rematch was even more action-packed, and this time, Canelo prevailed via majority decision after surviving a late onslaught from Golovkin.

The battle for GGG’s services were fierce, and in the end, DAZN lands another marquee fighter.