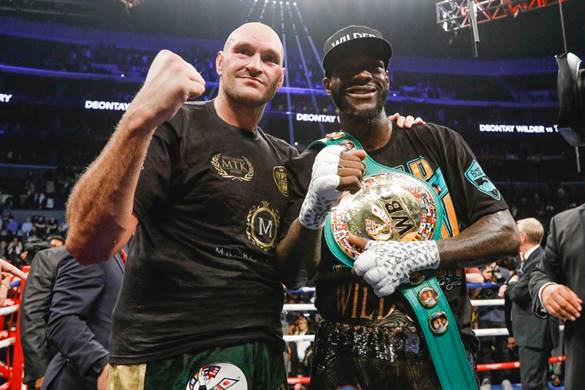 Deontay Wilder and Tyson Fury aren’t fighting again — at least not right away.

After Fury unexpectedly signed with Top Rank last Monday, The Ring reported that the rematch — which was in advanced negotiations for May 18 — was unlikely to go ahead as discussed.

On Tuesday, Top Rank informed the WBC that Fury was indeed going ahead with an interim fight. The WBC had ordered a purse bid to accelerate talks between Wilder and Fury. A Tuesday deadline was set by the organization for each party to inform the WBC of their intentions.

Fury will now return in May or June, sources told The Ring, as he looks to build his profile in the U.S. The lineal heavyweight champion is confident exposure on ESPN will build the rematch into a far bigger, more lucrative event in the fall.

Of course, before any rematch is completed, there’s still boxing politics to attend to. Wilder and Fury are now ostensibly on opposite sides of the aisle. Wilder is aligned with PBC, which holds TV deals with FOX and Showtime. Fury fights exclusively on ESPN platforms.

Top Rank is looking to bridge that divide by signing Wilder to a multi-fight promotional deal that includes a rematch with Fury. During an interview with The Ring last week, Wilder insisted that he’s a free agent and is looking to sign with whomever will give him the most lucrative offer as he seeks “generational wealth.”

Fury’s decision to table the rematch will have a ripple effect on the divisional landscape. The WBC recently ordered a fight between Dominic Breazeale and Dillian Whyte for the organization’s interim heavyweight title.

Breazeale is the longtime mandatory, but Whyte believes he has a claim to a title shot, too. WBC president Mauricio Sulaiman told The Ring he’ll convene with the Board of Governors to determine whom Wilder will fight next.

Breazeale was confident on the latest episode of Inside PBC Boxing on FS1 that he was next in line.

“That was the biggest thing that’s happened in the last 15 months. A situation like that where Fury kind of pulls out of his situation, his rematch, it’s the best thing for the WBC mandatory,” Breazeale said. “I’m super excited to take the fight. I’m waiting for the phone to ring with the date.”

Wilder and Breazeale have bad blood stemming from a February 2017 incident in Alabama after they both scored victories on a FOX card. Now, it appears Breazeale might finally get his chance to settle it in the ring.