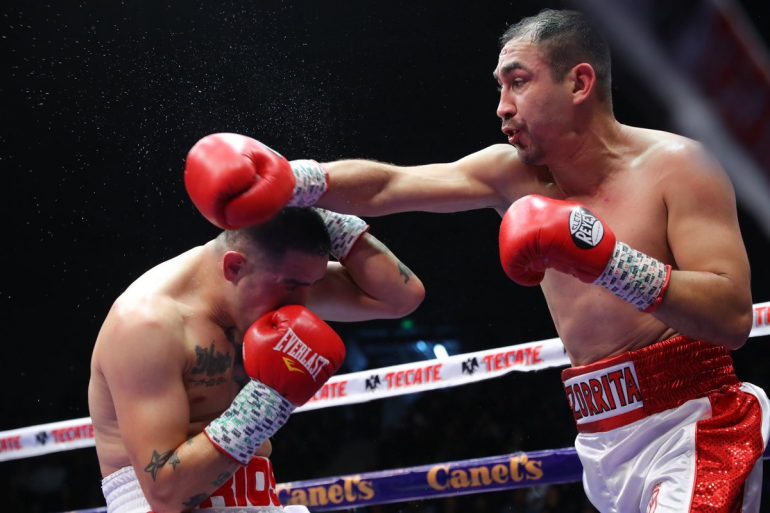 Humberto Soto lives to see another payday, while the future of Brandon Rios is now uncertain.

The former world titleholder in two weight classes scored an upset win over Rios before a sold-out crowd at the Auditorio Municipal in Tijuana, Mexico.

Saturday’s clash between Rios and Soto was a crossroads clash of two aggressive fighters who come forward, but were past their prime.

Soto was the underdog entering the fight against Rios, who last fought on Nov. 17, defeating Ricardo Alvarez by knockout.

The 38-year-old Soto had won his last three fights since a decision loss to junior welterweight contender Antonio Orozco in November of 2015.

Soto was the craftier and more-effective fighter from the opening bell. Soto was able to connect with several combinations, followed by an uppercut or hook to the head of Rios.

Soto’s punch output began to drop during the middle rounds, allowing Rios to outbox and outland Soto. Rios’ lack of body attack early in the fight came back to haunt him as Soto was busier in spots, especially at the end of each round.

Both fighters had their moments during the final two rounds of the fight, but Soto was the more effective fighter, beating Rios to the punch during several exchanges.

Lightweight Hector Tanajara remained unbeaten, defeating Ivan Delgado by technical decision after the end of the fourth round.

Tanajara (17-0, 5 KOs) used his height and reach to rain punches down on the more aggressive Delgado. Tanajara was effective in keeping his distance and working behind a jab.

Towards the end of round three, Tanajara suffered a cut over his right eye from an accidental clash of heads. Because a WBC regional title belt was on the line, a point was deducted from Delgado.

Both fighters let their hands go in round four. Just when the fight looked as though it would become a competitive clash, the fight was stopped due to the cut above Tanajara’s eye.

At the time of the stoppage, all three judges scored the bout 40-36 in favor of Tanajara, who resides in San Antonio.

The fight was a rematch of their Nov. 22 clash, which ended in a majority-decision draw in which many at ringside thought Cordova did enough to win.

Quirino (20-3-3, 9 KOs) was the more-effective fighter early on in the fight. Sensing he was down in the fight going into second half of the fight, Cordova closed the distance between the two fighters, throwing and landing several counters to the head of Quirino.

In junior bantamweight action, Joselito Velasquez stopped Kevin Villanueva in the fifth round.

Velasquez, who represented Mexico in the 2016 Olympic Games in Rio de Janeiro, broke Villanueva down in each round. Velasquez dropped Villanueva (10-2-3, 9 KOs) in round three and it was only a matter of time before the fight would get stopped.

Velasquez (8-0, 7 KOs) went in for the kill in round five, punishing Villanueva around the ring, prompting Villanueva’s corner to throw in the towel. Referee Fernando Renteria stopped the bout at 1:46.

Middleweight prospect and former amateur standout Diego Pacheco (2-0, 1 KO) won a four round decision over Alberto Aguilar (1-1, 1 KO). All three judges scored the bout 40-36 in favor of Pacheco, who signed a promotional deal with Matchroom Boxing.

Super middleweight Alexis Espino was successful in his pro debut, knocking out Victor Abrego (2-2, 1 KO) at 1:40 of the second round. Espino is trained by Robert Garcia.