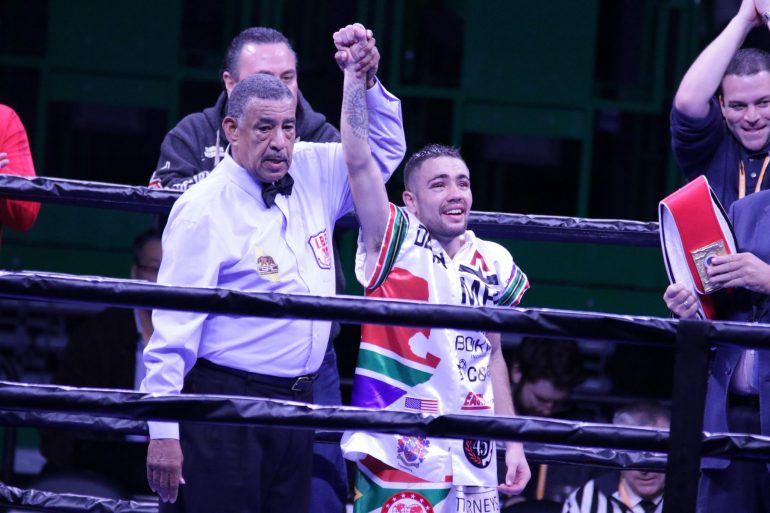 Deejay Kriel has vacated his title to move up to 108 pounds. Photo by Jhay Otamias
23
Feb
by Ryan Songalia

After eleven rounds, Deejay Kriel returned to his stool and was greeted with some blunt reality by his trainer Kenny Adams.

Adams had guided 27 previous fighters to world titles and knew where this fight was going if his fighter didn’t do something dramatic.

“He said to me ‘if you do not knock this guy out, you ain’t winning tonight. We need a knockout, do you want this?,’” recalled Kriel a few days after the fight against Carlos Licona, which took place on Feb. 16 at Microsoft Theatre.

For the first eleven rounds, Kriel admits the moment had gotten to him.

“From round one until round eleven, I did not know where I was. I felt so off, I was so lethargic in there. I just thought too much,” said Kriel.

Realizing his chance at becoming a world champion was evaporating before his eyes, he started moving his hands. That’s when things started to happen for him.

“I just went out guns blazing,” said the 23-year-old Kriel (15-1-1, 7 knockouts). “I remember that I caught him with something, I could see he was slowing down. He didn’t have any more speed in his punches so I thought maybe I’ve got this. With everything I had, I put it in my mind mentally and I just went out with everything. Then I caught him with a left hook and I saw he was going.

“When he went down my heart dropped and I knew I got this.”

Licona went down three times before the fight was waved off, 44 seconds away from the final bell.

Though the fight was untelevised, and took place deep on a Premier Boxing Champions card, long after the televised main event as part of what ESPN’s Steve Kim termed a “walkout card”, the fight still generated lots of buzz back home, with media celebrating South Africa’s newest world champion.

For the first two days after becoming champion, Kriel admits he couldn’t sleep, still riding the high of achieving his life’s dream. He took a week off from the gym – he trains at Bones Adams’ gym in Vegas – as his swollen right eye and a cut above it healed. He’d love to visit home in Johannesburg but Vegas is his home now, and his wife has a visa appointment on March 4 to join him.

Now that he’s got a belt around his waist, what does he want next? The number one guy in the division, Wanheng Menayothin of Thailand, naturally.

“I want that WBC world title,” Kriel said, before offering one caveat. “I wouldn’t like to fight him in Thailand. I don’t think they have a fair deal going on there. I believe there’s guys that have beaten him but they’ve given [Menayothin] the fight. It’s like daylight robbery there. I wish we could have a neutral site, maybe in the US is where we could fight.”

That’s not to say that Kriel doesn’t see why Menayothin has a belt, saying he’s a “great little fighter” with impressive strength for the division. Kriel just feels it’s “time he steps out of his comfort zone and try something new.”

Video: @DeejayKriel scores three knockdowns in round 12 in a come-from-behind technical knockout win over against Carlos Licona to earn the IBF strawweight title at Microsoft Theater in Los Angeles. pic.twitter.com/VhAURLQN54

The issue of making a fight like that, between top fighters in the sport’s smallest division, is that there is little appetite for those fights outside of local markets.

“Good luck,” said Gibbons about the possibility of that matchup. “There is like two dollars to promote that fight.” Gibbons adds that he expects Kriel to be back for his first defense in May or June.

The apathy shown towards fights in the lighter weight classes is something that sticks in Kriel’s craw.

“We’ve got some great fighters, I don’t understand why people don’t like to watch us, man. I guess we don’t knock each other out but it is entertaining,” said Kriel.

“I work just as hard, I’d say I work even harder than bigger fighters. There’s no difference. Doesn’t mean just because he’s bigger he’s working harder. I’m an IBF champion, I mean just as much as other champions out there. It doesn’t matter big or small they are, I work just as hard as they do. I deserve to have the coverage and be supported like they are.”

If there is a regret that Kriel has about his title-winning effort, he says he wasn’t able to show his skills in those earlier rounds. But he takes comfort knowing that having the belt means more people will tune in to watch him next time.

“I really had an off night. But hey we won, that’s the only thing that matters,” said Kriel.

For a fighter who turned pro after an 0-3 amateur record, and who lost his pro debut as well, Kriel isn’t doing too bad.