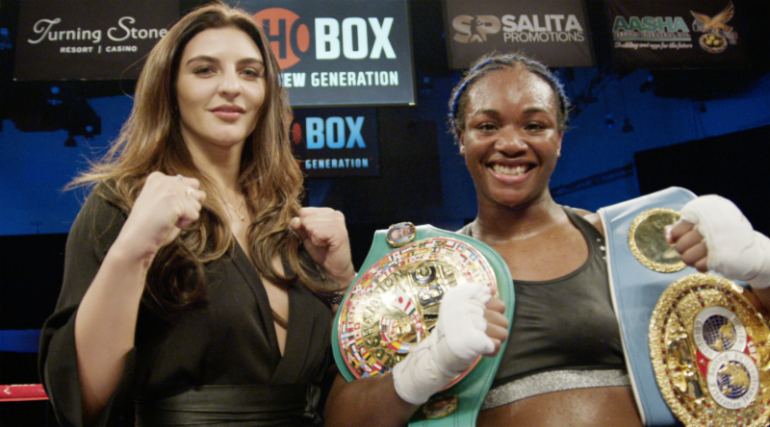 The winner of the middleweight showdown between Christina Hammer (left) and Claressa Chields will be the undisputed and Ring Magazine women's middleweight champ.
22
Feb
by Doug Fischer

The winner of the April 13 middleweight showdown between Claressa Shields and Christina Hammer will be presented Ring Magazine’s first female divisional championship belt in the publication’s history. 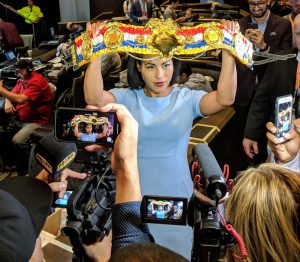 Last September, The Ring awarded undisputed welterweight champ Cecilia Braekhus with a women’s Pound-for-Pound title in acknowledgement of her career accomplishments. However, Shields-Hammer, which will be televised live on Showtime from Atlantic City, will be the first time the magazine recognizes a women’s boxing match as a Ring championship bout.

The Ring Ratings Panel unanimously and enthusiastically approved the creation of a Ring women’s middleweight title for the Shields-Hammer bout. All four sanctioning organization 160-pound titles (WBA, WBC, IBF and WBO) are on the line and both boxers are well respected and unbeaten.

Hammer (24-0) won her first world title 9½ years ago (before Shields won her first open-class amateur tournament). The long-reigning WBO titleholder has two victories over respected Kali Reis (the rematch earned her the WBC belt) and two wins against former beltholder Maria Lindberg, among other notable performances. 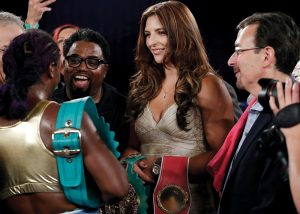 Claressa Shields and Christina Hammer face off after one of Shield’s bouts last September. Photo courtesy of Associated Press

At age 28, Hammer is still in her boxing prime, while 23-year-old Shields appears to be just entering her considerable athletic peak. Thus, their fight is considered one of the highest-profile and most significant bouts in women’s boxing history.

“This is the biggest women’s fight in a long time with international appeal,” sated Panelist Michael Montero.

“Great news!” added Diego Morilla, a Panelist based in Argentina. “As the representative of a country with dozens of tough, talented ladies clamoring for wider recognition, I am elated to be part of this historic moment, one of the few milestones left for female boxing to become fully and completely legitimized in the sport.

“The BWAA’s awards and now this are two really important steps towards that final push towards establishing female boxing forever and more. I do look forward to the official announcement, and I hope there will be one in each division in the near future.”

There will be. Katie Taylor has eyes on unifying all the major lightweight titles, as well as a showdown with pound-for-pound standout Amanda Serrano.

Andrew Cancio was a fighter who could never quite advance from the fringes of contender status. A disappointing setback always followed the notable victories that momentarily advanced the hardnosed Californian’s career. His last setback, a ninth-round stoppage to Joseph Diaz Jr. in September 2016, convinced him to withdraw from boxing. Better to focus on his fulltime job with Southern Cal Gas Company than become a fulltime gatekeeper. However, his children convinced him to give boxing one last try, and the junior lightweight returned to the sport in late 2018. He won his two comeback bouts, not without struggle, and was totally counted out against towering unbeaten southpaw Alberto Machado on February 9. 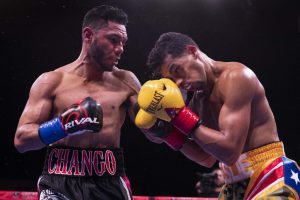 Andrew Cancio got up from an opening round knockdown and overwhelmed huge favorite Alberto Machado. Photo by Lina Baker / @SeeYouRingside

However, Cancio, who got up from an opening round knockdown and grinded Machado down to a sensational fourth-round stoppage, reminded boxing fans of two things that night: one, he’s got underrated craft to go with his determination; and two, we should never count out a battle-tested veteran who is still at or near his athletic prime.

On the Cancio-Machado undercard, Diaz bounced back from a couple setbacks of his own by outclassing one of those battle-tested veterans, gym pal Charles Huerta, over 10 rounds. Last year, Diaz dropped a decision to WBC featherweight titleholder Gary Russell Jr. and then failed to make 126 pounds against Jesus Rojas in his very next fight. Against Huerta, the 2012 U.S. Olympian appeared to recapture his form and mojo fighting at 130 pounds.

The Panel debated on where to rank Cancio and Diaz.

I thought that ranking was a little bit low for both junior lightweights and I questioned rating Daiz ahead of Cancio.

“Just playing Devil’s Advocate in regard to Anson’s new 130-pound line up, but it seems to me that Cancio is being rated rather low (at No. 8) for a guy who just stopped our No. 4 contender (Machado). Keep in mind that Cancio’s victories over Rocky Juarez, Rene Alvarado (who’s on a nice win streak and is now No. 1 in the WBA) and Kazakhstani lightweight prospect Aidar Sharibayev were all at junior lightweight.

“I would rate (Cancio) above Mickey Roman, who is clearly washed, and maybe even Masayuki Ito, who has looked very good in his two title bouts but hasn’t been in as tough as Cancio.

“It also feels a little strange to rank JoJo Diaz ahead of Cancio based on their featherweight fight from two and half years ago, but I get Anson’s reasoning.” 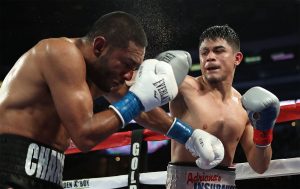 Diaz connects with a hook against Cancio during their 2016 featherweight bout. Photo by Tom Hogan.

Wainwright responded: “My thinking was Diaz stopped Cancio pretty definitively. It’s not like a (Robert) Easter over (Richard) Commey-type scenario.

“I have no problem with Cancio being a little higher and maybe Roman is the guy to drop a few slots. I felt Diaz deserved credit for his previous win over Cancio but also didn’t want him to be too high based on his limited body of work at 130.”

“Cancio should rank ahead of Diaz,” Abramowitz said. “In my opinion, this is the type of trouble you get into when you start combining weight classes. Cancio knocked out a champion at 130. He has done more at that weight than Diaz. Diaz beat him at another weight class. In a pound-for-pound sense, Diaz may be better, but in a divisional ranking, at 130, Cancio should be ahead of him.”

Associate Editor Tom Gray agreed with me and Abramowitz.

“Even though The Ring didn’t rate Machado as champion, and neither did I, he was rated No. 4 at the weight. That means a lot more than a crackerjack trinket from the WBA. I’m with Adam, Cancio should be ahead of Diaz at 130.”

Middleweight – Rob Brant stays put at No. 4 after scoring a 12th-round stoppage of Khasan Baysangurov.

Featherweight – Leo Santa Cruz remains at No. 1 after defending his WBA title against late-sub Rafael Rivera.

Junior featherweight – Ryosuke Iwasa remains at No. 10 after scoring a 10-round decision over fellow veteran Cesar Juarez.

Strawweight – DeeJay Kriel moves to No. 6 and Carlos Licona drops to No. 10 after Kriel stopped Licona in Round 12 of their IBF title bout.

Junior middleweight – Erickson Lubin re-enters at No. 10 with a retirement stoppage of accomplished veteran Ishe Smith.

Junior welterweight – Jose Ramirez remains at No. 3 following his majority decision over Jose Zepeda, who enters at No. 10 on the strength of his excellent performance.

Junior lightweight – Cancio enters at No. 6. Joseph Diaz Jr. enters at No. 7. Machado drops to No. 9. Gervonta Davis remains at No. 2 after blasting late-sub Hugo Ruiz in one round.

Featherweight – Diaz is removed now that he’s campaigning at 130 pounds. Tugstogt Nyambayar enters at No. 10.