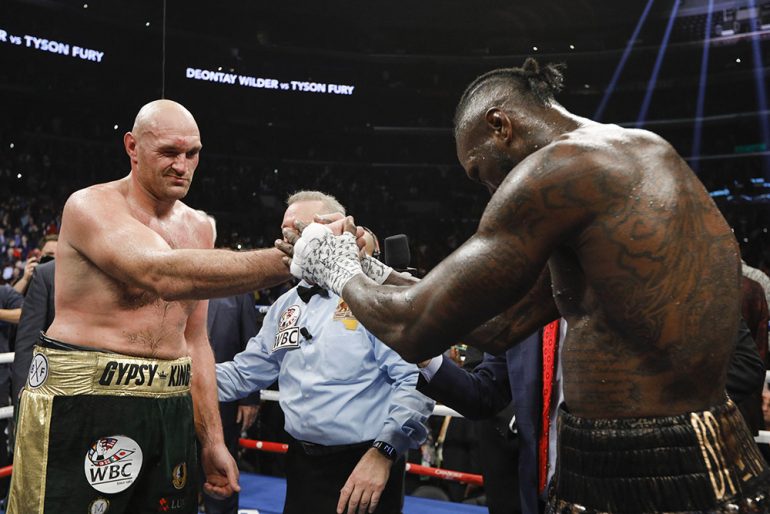 Deontay Wilder and Tyson Fury, by all indications, were on the precipice of agreeing to a lucrative deal for a heavyweight championship rematch on May 18 on Showtime Pay-Per-View.

Then came the stunning news Monday morning that Fury signed a co-promotional deal with Top Rank, a partnership that will ensure he exclusively fights on ESPN for the duration of the deal. Wilder is aligned with Premier Boxing Champions, which holds television agreements with both Showtime and FOX. Their December rematch, a fight that ended in a controversial draw, generated approximately 325,000 buys on Showtime PPV.

With Wilder and Fury now ostensibly on opposite sides of the street, it’s unlikely they’ll hold an encore encounter in the spring as planned, industry sources told The Ring. The more likely possibility: Wilder fights Dominic Breazeale, his longtime WBC mandatory, and Fury makes his ESPN debut against someone else as he looks to establish himself in the U.S.

Wilder, though, says that he and Fury aren’t necessarily on different sides of the political aisle. The Bronze Bomber told The Ring during a phone interview Friday that he’s a “free agent” available to fight on any network that pays him what he’s looking for.

Top Rank chairman Bob Arum stated on SportsCenter on Wednesday that the company extended a “tremendous offer” to Wilder to fight Fury on the ESPN platform. Arum told The Ring the proposal, which was also sent to Wilder’s manager Shelly Finkel and advisor Al Haymon “encompasses more than just the Fury fight.”

Wilder, of course, could choose to sign with Top Rank outright and compete exclusively on ESPN. The Ring’s No. 3 heavyweight is sure of one thing: he wants the biggest and best fights for the most money possible.

“If everything’s right that we want, I have no problem fighting on ESPN. Why not?” Wilder, 33, told The Ring. “We want to go where the money is. That’s the point of the game. If I’m a free agent and another network is offering X amount of dollars and another throwing dollars that’s better, what do you want me to do? I can’t sit back and let my years run away from me. I have to capitalize on all options possible.

“All these other networks will be around for years while I sit around and say I could have and would have and should have. Wherever the money is and they offer me the most, I’m going. That’s part of being a free agent. I love being able to move around.

“You gotta make as much money as you can. I’m looking for generational wealth. I’m going to have to collect what’s due for me; what I’m worth. I’m the top guy in the heavyweight division. I don’t care what none of these other fighters or anyone else thinks. When I get in that ring I’m a total beast.”

Even if Wilder (40-0-1, 39 knockouts) signs with ESPN, an immediate fight with Fury is unlikely. Arum said he’d rather match the fighters in the fall; Wilder said he understands the strategy of allowing a fight to “marinate” to ensure it’s even more lucrative. Wilder wants Fury now, but he’ll also take the fight later. He just knows he needs to get his hands on Fury sooner than later.

The Brit was outboxing him for large stretches of the fight, but it was a surprise he even reached the final bell. Wilder dropped Fury hard in Round 9 and then appeared to finish him in Round 12 after a thudding overhand right connected followed by a punishing hook. Somehow, Fury made it to his feet and even inflicted damage on Wilder after he beat the count.

Still, Wilder is sure that devastating knockdown is baked into Fury’s mind, causing him discomfort at the mere thought of a rematch.

“My highlight is knocking his ass out in 12th round. His highlight is getting up off the ground,” Wilder said. “That’s why it was easy to see who the winner was. I still got my belt. To be a champion you gotta beat a champion.”

“The only good fights he got are going back to the U.K. He don’t have nothing else here. (The fans) somewhat know Fury because of me. But they’re not going to be interested in him fighting other fighters. He’s got a boring style, he’s a very boring fighter. When guys fight me, it’s going to be entertaining. … It makes the fight exciting because they know they life is on the line every time they fight me and it literally is.”

Fury (27-0-1, 19 KOs) wasn’t nearly as confident a rematch was in the near future. He wasn’t even sure it was necessary, telling The Ring on Wednesday that “I’m not going to continue to cry all over spilled milk.”

The Ring’s No. 2 heavyweight is looking to establish himself as a star in the U.S., too, under a deal that ensures two stateside fights per year. The charismatic big man is being pegged for a return in May or June, and at the moment, there aren’t too many appetizing options on the surface

Dillian Whyte is a promotional free agent, and a matchup between he and Fury would be a domestic smash hit in England — and a big fight in the U.S., too — but it’s unlikely to materialize in the spring. Top Rank is looking to set their new signee up for the rematch, and the power-punching Brit is a dangerous foe. Top Rank promotes contenders Kubrat Pulev and Oscar Rivas, and if neither fighter is the first opponent for Fury under his new deal, we’re all looking at far more underwhelming opponents.

“I’m not too sure (if boxing politics will halt a Wilder rematch), I’m not a political person, the promoters do what promoters do, we’re just boxers, we’re fighters,” Fury, 30, told The Ring. “There’s not much I can do about it, is there? I’m not a boxing promoter. I signed a contract now, whatever fights they get, they get. It’s up to me to keep winning. … We have plenty of good fights coming along the road.

Clearly, Fury isn’t exactly begging for the rematch fans are dying to see. “For him to be fine with it let me know he don’t want this fight,” Wilder said. The Alabama native could be headed toward a title defense against Breazeale, a man he has plenty of history with, if Breazeale doesn’t end up fighting Whyte himself (the WBC ordered a fight between the two for its interim title and talks have been ongoing, but that was when Wilder and Fury appeared set for a May rematch.)

Breazeale and Wilder were involved in an altercation in February 2017 in Birmingham, Alabama. Breazeale knocked out Izuagbe Ugonoh in the fifth round on the FOX undercard. Later that night, Wilder stopped Gerald Washington in the same round. Breazeale was rooting for Washington, a buddy of his who also hails from California. Wilder’s younger brother, Marsellos Wilder (who competes as a cruiserweight), took exception.

A skirmish ensued at the hotel later on, and Breazeale claims Marsellos punched him in the back of the head. “I don’t care about Dominic Breazeale at all, I don’t feel he bring anything to the table but another body I can lay out on the canvas; another knockout for the highlight reel; another viral video for the internet,” Wilder said. “That’s all he is to me.”

Wilder’s sights remain set on Fury. What he does on the business side to land that highly anticipated rematch is immediately one of the biggest storylines in the sport.