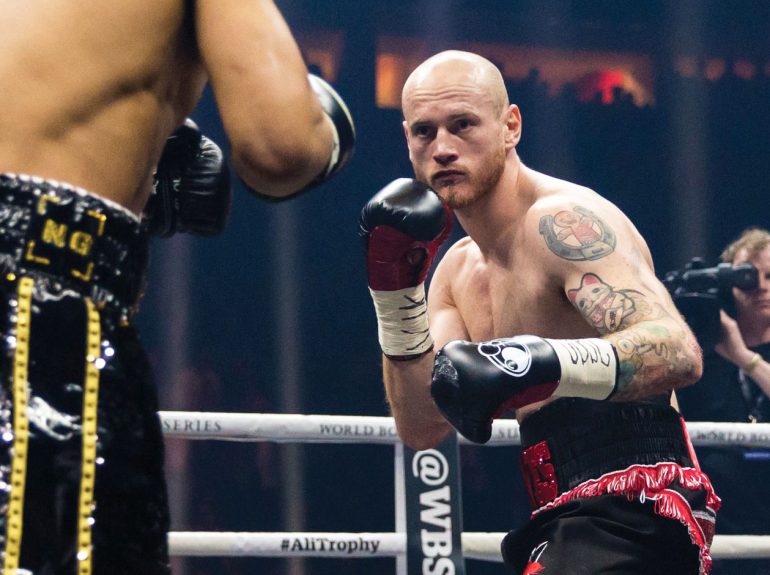 Who better to ask, right?

Recently retired former WBA super middleweight champion George Groves has a unique distinction in that he is the only man to have defeated both James DeGale and Chris Eubank Jr. who are set to collide on Saturday at the O2 Arena in London.

In May 2011, Groves, who had already defeated DeGale as an amateur, bested the former Olympic champion again, handing him his first professional defeat. “The Saint” boxed smartly, frustrating his southpaw rival with adept movement, defensive finesse and sharp punching. It was a close fight, but few people complained when the majority decision was announced. With the victory Groves added the British championship to his collection.

Almost six years later, in February 2017, Groves was WBA world champion. In his second defense, he faced Eubank Jr. in the semi-finals of the World Boxing Super Series and turned in what was arguably his most complete performance. As underdog, Groves imposed his boxing skills on Eubank who swung wildly, and aimlessly, through fresh air. Despite sustaining a badly dislocated shoulder in a nail-biting final session, Groves emerged as the unanimous decision winner.

Fully aware of each fighter’s plusses and minuses, Groves agreed to speak to The Ring about his former opponents and offered a prediction on the outcome of this hotly-anticipated 12-round non-title bout:

“DeGale will find a home for his long, loopy shots. He’s got a good center of gravity, good rotation and good power through his core muscles. His shots sometimes come across slappy, but he does have quite good power. He’s really long and if he catches you at long range that’s when he gets full power on the shots. DeGale also has great punch variety; he’ll hit you with a right hook over the top, then he’ll follow with a left uppercut, left hook, bam, bam, bam. He definitely has a great repertoire and Eubank doesn’t move his head. If Eubank tries to just drop back out of range, he’ll still be open to those bent arm, loopy shots that come outside your vision. DeGale should look to keep it long because you can’t allow Eubank to just march forward and get inside. That’s what (Caleb) Truax did and DeGale ended up running from one rope to the next, until he was trapped in a corner.”

“Eubank is a tough character. He was on a real momentum swing when I fought him, and I made sure to conserve energy in case he launched one of those big attacks, when he throws caution to the wind, but it never came on the night. I think that’s because I managed to get into my rhythm so well and I buzzed him a bit early. He probably didn’t recover from that fully and I was on top of my game that night. Eubank’s loss to (Billy Joe) Saunders was close, a split decision, and that was at domestic level before either of them went any further. Also, that fight was at middleweight, whereas with me he had to deal with size. DeGale is marginally taller than me with a slightly longer reach, but his trouble is staying switched on for 12 rounds. He’s also never done saying how he’s back from injury, but when a fight ends he talks about injuries. Eubank has the style to beat DeGale if he gets into range, lets his hands go and outworks him.”

Prediction: “DeGale talks about retirement a lot and that’s not ideal. Eubank is a lot fresher, he’s looked up for it this week, and James appears to be a bit agitated. I’ll probably edge to Eubank on a decision. DeGale’s tough and Eubank knows a win in this fight is a lot more important than a stoppage. Having said that, a stoppage win wouldn’t surprise me because DeGale doesn’t have the same survival skills he used to have. If Eubank hurts DeGale, he has the ability to keep punching and get the job done.”

The bout will be broadcast live on ITV Box Office in the U.K. and Showtime in the U.S.