The Ring is proud to present “The Boxing Esq. Podcast with Kurt Emhoff.” Emhoff, an attorney based in New York City, is a top boxing manager who has represented more than 10 world titleholders in his 20-plus years in the sport. 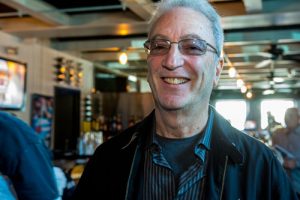 Emhoff’s guest on this podcast is legendary Philly promoter Russell Peltz, who is celebrating his 50th year in the boxing business. They talked about Russell’s background in journalism and how he almost never became a promoter. They also discussed Russell’s several decades as a promoter and how the boxing business has evolved and changed since his promotional debut in 1969. The discussion included some great stories of the many legends he’s promoted including: “Bad” Bennie Briscoe, Bobby “Boogaloo” Watts, Eugene “Cyclone” Hart, Marvin Hagler, Matthew Saad Muhammad, Marvin Johnson, Roberto Duran, Bobby Chacon, Jeff Chandler, Frank “The Animal” Fletcher, Charles “The Hatchet” Brewer and many more.

On the upcoming March 15 card in Philly he’s co-promoting with Eddie Hearn:

“This is [Tevin] Farmer’s first title defense in Philly. They had a good time at the press conference a few weeks ago. Him and [Jono] Carroll, who seems to be a pretty good talker. It’s going to be interesting. It’s a big card. [Gabriel] Rosado is probably one of the most popular Philly fighters in recent years. He’s taking on Maciej Sulecki. It’s a career changing fight for Rosado, if he can win it. To me, it’ll put him in line for a shot at the middleweight title. And that could even be against Canelo or the winner of 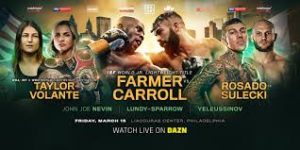 Canelo-Jacobs. That’s how important I think the Sulecki fight is. It’s Rosado’s first fight in Philly in seven years, which is pretty incredible. But he’s my kind of fighter. And so is the [Avery] Sparrow-[Hank] Lundy showdown. Maybe it’s a changing of the guard. Maybe Sparrow’s biting off more than he can chew because he is a junior lightweight at best. But they’re fighting at 135. [There’s a question of] whether or not Lundy is on the wrong side of the hill. We’re going to find out. Like I said tickets are moving well and we’ve still got time, so I’m looking forward to it. I’m looking forward to working with Eddie Hearn. I worked with his father Barry back in 1992 when my fighter Tony Thornton, “The Punching Postman”, challenged Chris Eubank for the super middleweight title in Glasgow. So, you know, they say you’ve been around a long time when you’re promoting the sons of fighters you once promoted. But now I’m working with the son of a promoter. So that means I’ve been around awhile. I don’t know if too many other people could say that.”

His aspiration to be a boxing writer and why he quit to start promoting:

“I started working [at The Philadelphia Evening Bulletin newspaper] full-time between my junior and senior year [at Temple University]. I worked on the sports desk and I worked the lobster shift, midnight to eight. And then, when school started as a senior, I went to school from 9:00 to 1:00 and started over and went to sleep. And then I went to work again, and I loved it. It was the greatest to get a job like that between your junior and senior year at a major [newspaper]. And the Bulletin was the oldest continuous afternoon paper in the country at a time when newspapers were still viable. And if I had gotten the job to be the boxing writer, which is what I wanted, I probably would never have left. But the man who was the boxing writer at the time, Jack Fried, got an extension on his mandatory retirement when he was 65. And I said to myself, what am I going to do – wait around for him to die?”

On the difference between maneuvering fighters in the ratings in the late-1960s-early-1970s and today:

On getting Bennie Briscoe his first shot at the title in 1972: 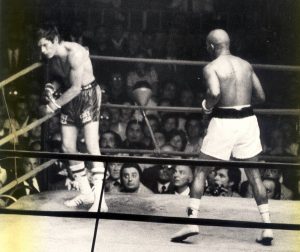 “[Getting a shot at Nino] Benvenuti – forget it, ‘cause Briscoe beat him up in training camp. We knew

that wasn’t going to happen. So, when Benvenuti lost the title to [Carlos] Monzon, that was the greatest thing that ever happened to us. Because Monzon was a fighting champion and he would fight anybody. He didn’t care. The only thing with Monzon is he would only fight Briscoe in Argentina, which was okay. I mean it was a wonderful experience to fight in front of 25,000 people in Luna Park against a real Hall of Famer for THE World Middleweight Title. I mean, not too many people get to experience something like that. And to have the guy out. He had him out and couldn’t finish them. So, you know, no harm in that.”

How he turned down working with Marvin Hagler:

“After the [first Willie Monroe] fight was over (Hagler lost a unanimous decision), I went back to the dressing room and the Petronelli brothers cornered me and they said, “Russell, you’re working with (Bennie) Briscoe, (Cyclone) Hart, (Boogaloo) Watts and Monroe. Why don’t you take us on? We’ll cut you in.” I said to them, “What am I going to do with you if you can’t even beat the fighters from Philly?” I probably turned down 10% of Hagler. What are you going to do? But he came back and fought for me again.”

On the first Matthew Saad Muhammad-Marvin Johnson fight being the best he ever saw live:

“I’m privileged to have promoted the greatest fight I ever saw him in person. And I was at Corales-Castillo I and I was at Ward-Gatti I, but nothing, you know, I shouldn’t say nothing touches it. This fight 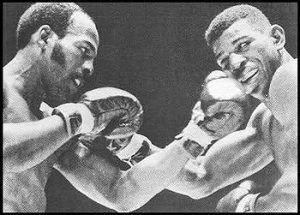 Marvin Johnson (left) and Matthew Saad Muhammad (then-Matt Franklin) go at it in their classic first fight for the NABF light heavyweight title in Philadelphia.

was still the greatest fight I ever saw in person. It was just like nothing but bombs. I mean would the fight had been stopped today? I don’t know. I mean Marvin was hitting him with uppercuts. You know, when you get hit with an uppercut, how your head snaps back. You know, Marvin must have been out a half a dozen times. Yet going into the 12th round, one judge had it even, one had Marvin ahead and one had Matthew ahead. It was just a classic. And if you’ve ever seen the knockout the way Marvin slowly going [down], ‘cause Marvin was out of gas, right? Holding onto the ropes and going down in slow motion, and then the camera shoots to all the hands going up in the air ringside. Just like hundreds and hundreds of hands in the air, people cheering. And it was just a classic, classic fight. I mean for the NABF title – better than the rematch for the world title, which was also a great fight in Indianapolis. But there was nothing like this fight.”

When boxing became more of a niche sport and dropped out of the mainstream:

“Well, Alex Wallau [ABC TV executive] predicted that once it left the networks and it went to the pay [cable] stations and pay-per-view that it would hurt boxing. I think he was certainly right. I think the other thing that hurts boxing even more than that, and I’ve said this many times, is the demise of newspapers. Because, let’s say in Philly, if you’re an Eagles fan or a 76ers fan or a Phillies fan and you want to read about the Phillies back then, you’d buy the newspaper and you’d read it. And as you were turning the pages, there’d be a boxing story because they were always boxing stories. So, you’d read about it. Now, if you’re an Eagles fan you go to the football websites or if you’re a 76ers fan, you go to the basketball websites. So, the only people going to the boxing website are the diehard fanatics. So, you lose the crossover and that to me is a monster reason for the demise of boxing – bigger than people realize.”