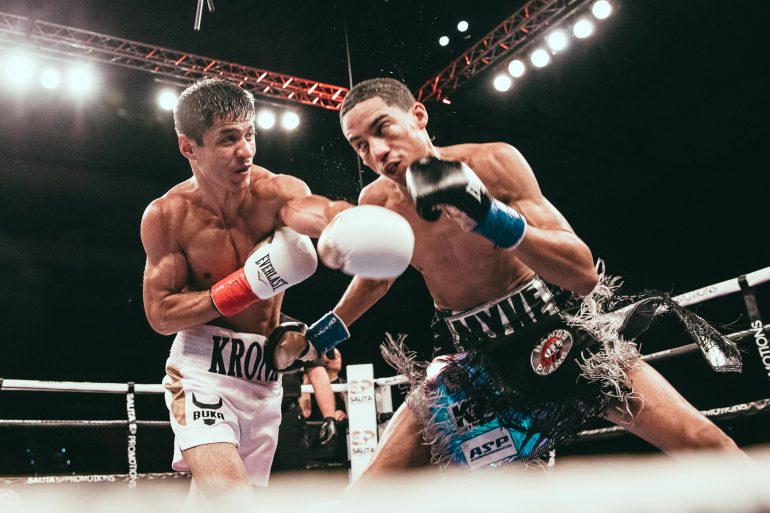 Shojahon Ergashev came in with buzz surrounding him, in Mulvane, Kansas, on a card promoted by Salita Promotions.

A power hitter, from Uzbekistan, and might he be dropping and stopping a long and tall foe in showy fashion, hopeful prospect watchers thought to themselves.

Not so much; Mykal Fox proved hard to hit and his defensive aptitude made it so the bomber wasn’t able to get accurate enough to put him in danger. After ten rounds, we went to the cards. No one had a handle on what they’d be deciding in a fight that main evented ShoBox.

It was no classic, but Ergashev gets the W, he gets seasoning and he has material to draw on which tells him what he needs to learn.

Punch stats showed a low output for the weight class, with Ergashev connecting on 68 of 329 while Fox was 93 of 433.

In the first, the two junior welters rumbled because Ergashev came out fast. Fox looked to clinch to keep Ergashev from steam rolling him. Then he got to moving. Dad/trainer Troy Fox told his son to “move, keep rolling, man, you tryin’ to stay tall.” He called for spinouts.

In the second, we saw the two lefties stayed in their lanes. Ergashev was the predator, and looked to crack some to the body in order to sap Fox, if he wasn’t able to drop and stop him. The ref barked at Ergashev, for the third time now, to not push Fox’s head down. “Do you understand?” he yelled. We saw Ergashev loading up, and often missing big. “Relax,” said Sugar Hill to Ergashev after the round. He reminded him to stay balanced, a chapter from that Emanuel Steward school text.

To the third and fourth; we saw the Uzbek, with the stitching “Kronk” on his belt-line, settle down. He had to know he’d not get a quick blowout, so he clicked into another gear. His patience kicked in, while Fox’s data collection made him more confident. He was looser now, his movement more fluid, because he believed he knew Ergashev’s rhythm and traits.

To the 5th, we saw Fox even more comfortable. He said coming in he wanted this to go late, figuring his smart boxing would be well served the later the fight went. In the sixth, Fox slid, and feinted, snapped a long jab, kept Ergashev off balance and a step behind. He was still loading up, punching really the only way he knew how to, by and large. Sugar Hill asked for balance and told his kid to listen to the ref, so he wouldn’t get a point taken away.

In the seventh, we saw Ergashev land a sharp right hook. He looked peppy coming out for the eighth…Ergashev had to reach to get to Fox, who is able to move almost four feet at a time with those long legs. “Cut the ring off,” Hill instructed as he sent Ergashev out for nine. A Fox right started out the round. “Foxes’ best punch of the fight,” said blow by blow man Barry Tompkins. Raul Marquez thought the fight was up for grabs and Steve Farhood concurred.

The crowd hooted and booed at the lack of volume from each with 40 seconds to go in the ninth. Was the tenth a go for broke round which made it all worth it? Naw; more of the same. Ergashev loaded up and Fox saw ’em coming. We went to the cards…

This took place in the super bantam class for the NABA-USA title.

Early on, Ward used his feet to good effect. He moved mostly laterally and that helped him pick the times when he wanted to engage. Hernandez wanted to close the distance, cut off the ring, explode on Ward, and track down the slippery eel.

In round 4, down went Hernandez. He was groggy when he got up, but the bell sounded. The left hook, tight and filthy, did the damage. In the fifth, Ward kept on being a boss. In the sixth, we saw more blinding speed from Ward, and he was backing Jesse up. He was now not a cutie, but a badass version of that.

To round 7; we saw Jesse try out a lefty stance and still get whacked to the body. And the face…Ward was looking sharp and totally confident. The other guy, his face was marked up and he wasn’t getting ideas for adaptation from his corner. His punches were too long and easily seen and slipped by Ward in the 8th. Jesse needed a stoppage to win, he had to know, and he didn’t get it. He thought he could slow down the slickster, but never did.

To his credit, Hernandez was swinging for those fences till the bitter end. To the cards they went…After ten, the scores were: 100-89, 99-90, 98-90. Ward got the W, and interestingly, Hernandez had hopes that his name would be called, he had his hand raised in anticipation of good new, but was disappointed.

Also on the card, flyweight Nico Hernandez, a Kansan, went to 7-0 (4 KOs) with a decision over 16-10-1 Vic Garcia. He fought in the main event of a two-hour live stream on UFC Fight Pass at the Kansas Star Casino.