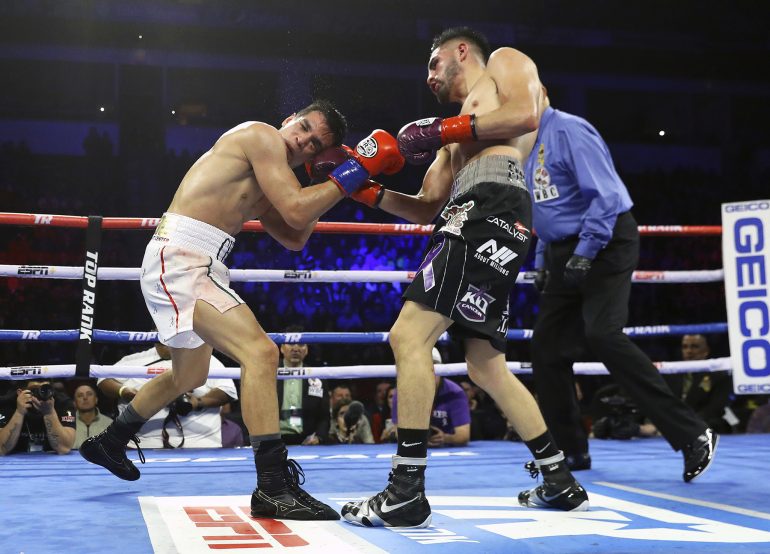 For the first time in his pro career Sunday night, Jose Ramirez had to rally from an early deficit to win.

Ramirez overcame a cut over his right eye to win a hard-fought 12-round majority decision over Jose Zepeda before a sold-out crowd of 14,034 at the Save Mart Center in Fresno, California.

With the win, Ramirez successfully defended his WBC junior welterweight title for the second time.

Ramirez, who resides in the nearby farming community of Avenal, was coming off a one-sided decision victory over Antonio Orozco in his last fight on Sept. 14.

The southpaw Zepeda had won his previous seven fights since losing by knockout to Terry Flanagan in July of 2015.

Zepeda, who is trained by Freddie Roach, was effective early on in the fight. Ramirez closed the distance between the two fighters, but did so without a jab. Zepeda coupled that with movement to outbox Ramirez.

“(Zepeda) is a tough fighter, who had good range and distance,” said Ramirez after the fight. “He fought a smart fight.”

Ramirez finally utilized an effective jab in round four, where he connected on a series of straight and overhand right hands to the head of Zepeda.

At the urging of trainer Robert Garcia, Ramirez continued to press the action, but Zepeda did well countering effectively to the head of Ramirez.

Both fighters had their moments during the second half of the fight, where Zepeda was content to sit in the pocket as opposed to using lateral movement.

With the fight in the balance going into the championship rounds, Zepeda connected with several uppercuts during the 11th round. Ramirez likely swung round 12 in his favor with a barrage of punches during the last 20 seconds of the round.

Despite the cuts he suffered in the fight, which was the first time in his career, Ramirez believed he was the more effective fighter and deserved the decision.

“I knew it was a close fight,” said Ramirez, who was dedicating a portion of his purse to the Community Cancer Institute in nearby Clovis. “I felt I did more during the championship rounds. The head-butts opened the cut. It was the first time in my career that happened. It was a good learning experience for me.”

Zepeda, who resides in the Los Angeles suburb of Long Beach, thought otherwise.

“It’s kind of sad and it hurts a lot,” said Zepeda, who is promoted by Zanfer Promotions. “I lost my first fight (in 2015 against Terry Flanagan) because of a shoulder injury. I think I was short on execution tonight. I was able to go 12 rounds with a tough fighter in Ramirez.”

Ramirez stated he would like to unify the 140-pound division. He had another plan if that is not possible.

“I want to fight the champions (in the division). If I don’t fight any of them, then maybe I’ll go up to 147 pounds.”