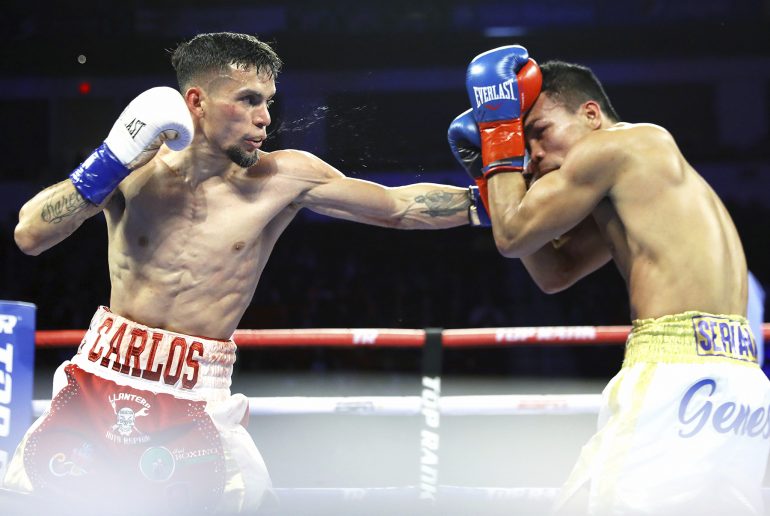 Castro, who resides in Phoenix, Arizona and signed a promotional deal with Top Rank in 2018, was effective during the first two rounds of the fight.

Servania, who was cut over his right eye early on, attempted to close the distance in round three, connecting with an occasional right hand to the head and body.

By the middle rounds, Castro used his ring generalship to box from the outside. He was effective in landing two or three-punch combinations before backing away from Servania’s counter punches.

During the second half of the fight, Servania (32-2, 15 KOs) was not able to cut off the ring, making it easier for Castro to box from the outside.

Sensing he was behind on the scorecards, Servania continued to press the action during the last couple of rounds, but his punch output dropped significantly compared to earlier in the fight.

Servania, who resides in the Philippines, had won his previous three fights since losing by unanimous decision loss to WBO featherweight titleholder Oscar Valdez in September of 2017.

Flores was busier throughout the six round bout. Torres (6-3, 3 KOs) had his moments, but Flores landed the more effective punches.

In a minor upset, junior welterweight Christian Soria of Argentina stopped former prospect Joel Diaz, Jr. in the third round.

A two-punch combination from Soria dropped Diaz in the third round. Diaz beat the count, but was dropped by a left hook to the head from Soria, prompting referee Marcos Rosales to immediately stop the fight at 1:50.

Junior featherweight and Fresno resident Isidro Ochoa (7-0, 3 KOs), who is trained by Robert Garcia, stopped Jesus Guzman (7-3, 5 KOs) at 1:18 of the fifth round.