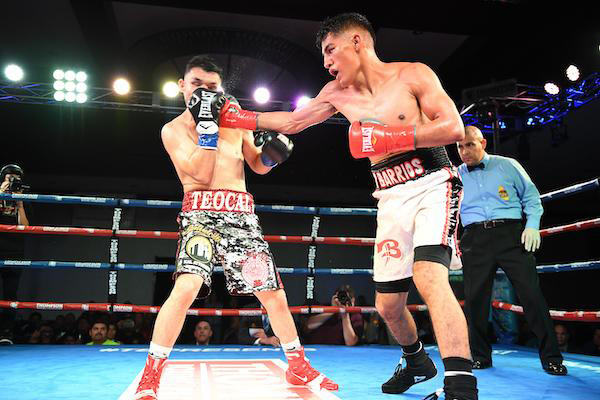 Saavedra got off to a fast start with a first round knockdown that caught Hernandez by surprise. Saavedra, who traveled from San Luis Potosi, Mex., was accurate on the offensive and with his counter punching ability.

Hernandez never found a comfort zone. His attempts to cut the distance were often stymied by a Saavedra jab or two-punch combination that battered the shorter Hernandez. Saavedra was in control from start to finish and it showed in the scorecards. One judge had it 79-72, while the two others scored it 78-73. 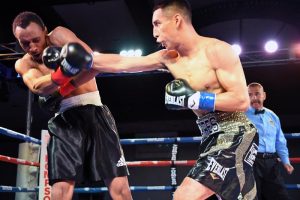 In the co-feature, lightweight Ruben Torres (8-0, 7 KOs) of Los Angeles stopped Elliott Brown (2-7, 2 KOs) of Erie, Penn. at the conclusion of the second round. Torres was clearly the superior boxer, as he moved effortlessly and landed big shots from the jump.

Torres used his hand speed to mix up his punch angles, thoroughly confusing Brown during what turned out to be a short fight. Torres, who is studying communications at Cerritos College, landed enough strong punches in the second round for Brown’s corner to waive off the fight.

Lightweight George Acosta (7-0, 1 KO) of Whittier, Calif. cruised to a unanimous decision win over Guadalupe Arroyo (3-15) of Huntington Beach, Calif. Acosta, who held a considerable height and reach advantage, peppered Arroyo with a left jab throughout the four-round fight.

Acosta fought a largely technical fight by working off his jab and countering effectively when not pressing the action. Arroyo never looked in rhythm and struggled to find angles against the much more active Acosta.

Acosta would sweep the scorecards, 40-36. 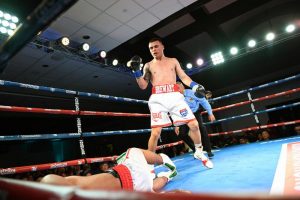 Brewart punished Reyes in the first round with a pinpoint body shot that forced Reyes to take a knee. In the second, Brewart connected with left hooks to the body and straight rights. For the knockout punch, Brewart showed some patience and uncorked a flush right hand to the chin that sent Reyes flat on his back.

The knockout occurred at the 1:58 mark.

Ruiz started the second round by landing a strong combination that would quickly set the stage for his stoppage win. He stalked Ahumada and rocked him with a left hook to the chin that buzzed the shorter Ahumada. Ruiz was about to attempt a combination when referee Raul Caiz, Jr. called the contest at the :49 mark.

“New Blood” was presented by Thompson Boxing Promotions and sponsored by Everlast.