Genesis Servania seeks title at 122 pounds, but has unbeaten Carlos Castro in his way 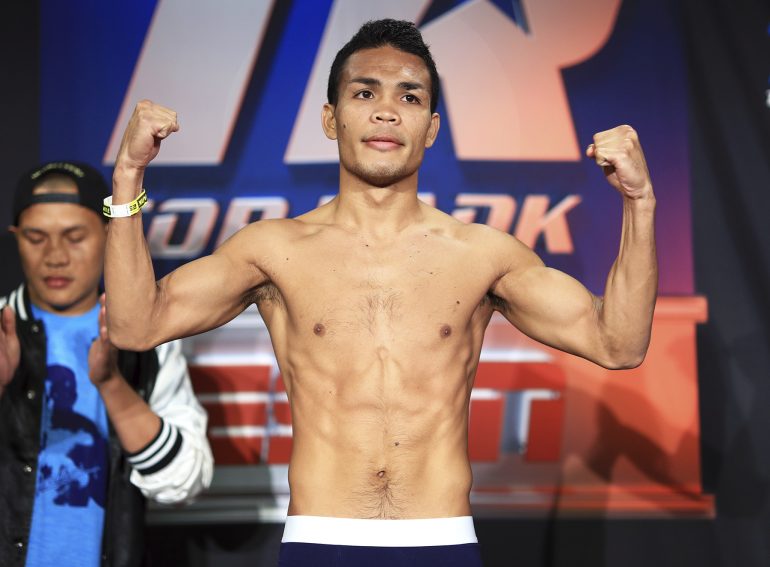 Genesis Servania was watching closely when Emanuel Navarrete pulled off a late candidate for Upset of the Year in December against Isaac Dogboe. The unexpected dominance from Navarrete awarded him the WBO junior featherweight title and sent shockwaves through a division that looked like it was destined to belong to the Ghanaian rising star.

It also foiled the plans of Servania, who like Dogboe is promoted by Top Rank, and had been looking to challenge him in 2019.

Servania told The Ring prior to his most recent fight last September in Oakland that he was on course to face Dogboe, provided Dogboe gets past a voluntary defense against a fighter who had yet to be named. That fighter who had not been named for Dogboe’s Big Apple debut wound up busting his face up en route to a unanimous decision.

“I wish we had fought before I fought [Carlos] Carlson,” says Servania (32-1, 15 knockouts), who defeated Carlson by third round KO.

Instead, Servania is fighting another fighter under the Top Rank umbrella named Carlos Castro this Sunday at the Save Mart Arena in Fresno, California underneath the WBC junior welterweight title fight between Jose Ramirez and Jose Zepeda.

Ramirez-Zepeda will be shown on ESPN, but the ten-round Servania-Castro fight fight will be broadcast on ESPN+.

Castro (21-0, 9 KOs) has fought all of his pro bouts in his home state of Arizona, and reportedly had nearly 200 amateur fights, including two National Silver Gloves titles, before he turned pro at age 18. He fought just once in a scheduled ten-rounder, stopping the tough Alexis Santiago in ten rounds about a year ago. In that fight, Castro showed the ability to use his long reach to keep an opponent at bay with his busy jab, but also a willingness to get on the inside and trade uppercuts and body shots before Santiago’s corner threw in the towel.

“A lot of people say that in his fights he always comes forward but in the fight I can’t be too confident because he has not lost,” said Servania, a native of Bacolod City, Philippines who now lives and trains in Kanazawa, Japan. Servania doesn’t expect the 24-year-old Castro to exchange power shots in close, and neither does Servania’s trainer Mark Gil Melligen.

“We saw in his fights that if he can take on the opponent he just stays in front of them,” said Melligen, who brought Servania to Beijing, China to spar with Xu Can before Can’s win over Jesus Rojas in Houston. “Chances are that if Genesis goes in and counters, the opponent will run away.”

Castro will be stepping way up in competition against Servania, 27. Servania made his arrival to the championship level with a back-and-forth war against Oscar Valdez for the WBO featherweight title in 2017, knocking him down in round 4 before losing a competitive decision.

Servania remains the no. 1 ranked contender for Valdez at featherweight, but Top Rank vice president Carl Moretti says the objective is to secure a title fight at 122 pounds, where he had campaigned for most of his career prior to leaving the Philippines and relocating to the Kashimi Gym.

“Which ever can get us there quickest,” said Moretti, noting no preference of junior featherweight titleholder for Servania to challenge.

Servania admits that 126 is probably his best weight but is also confident he can win a title at 122 pounds, and sees a fight with the aforementioned Navarrete as his best route there. He believes Navarrete would beat Dogboe again in a rematch because the tall Mexican had Dogboe’s style figured out, but that his own style would go head-on with Navarrete.

“When he and I fight I think out styles will match well,” said Servania. “There will no running around. I’ll keep coming forward.”

That’ll have to wait for now as Servania has yet to reenter the WBO’s rankings at that weight, but a win over Castro might open that door.