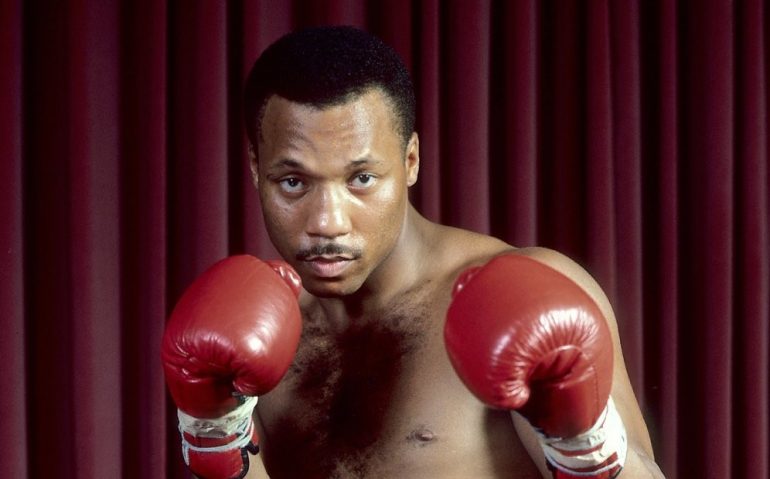 Pinklon Thomas had a troublesome youth and didn’t find boxing until his late teens. However, despite minimal amateur experience he went on to win the WBC heavyweight title in the mid-1980s and fought the top big men in the sport over a 15-year career.

Thomas was born in Pontiac, Michigan, on Feb. 10, 1958. He came from a good home and had two older sisters. During his formative years, he was very athletic and excelled in several sports. As a child he watched westerns and gangster movies with his mother and feels that’s what drew him to the streets.

“I chose to go to the projects, I wasn’t from the projects, I chose the lifestyle,” Thomas told The Ring. “I was an athlete in elementary school. By the time I was in seventh grade I was shooting heroin. I got caught up early. I was hanging out with older guys because I was bigger than guys I went to school with.”

“I did a lot of crazy things to get money,” Thomas said. “I did what I had to do for my habit. I did things against the law: armed robbery, cleared out cash registers, snatched money. I did all kinds of crazy stuff.”

When Thomas was 17 he got married. His wife joined the army, but his own application was declined. They moved around to a couple of different bases before she fell pregnant and received honorable discharge.

The couple settled in Seattle, however, that wasn’t the end of Thomas’ troubles. He found a new friend who shared his vices. Thomas was evicted from his home because he was using more drugs than he was selling and was unable to pay his bills. It forced him to move to the projects.

While there he began bragging that he was a professional boxer, when in fact he’d never boxed in his life. He was invited to the local gym and had a lively first encounter.

“I had just shot some heroin and cocaine speedball,” he said. “They had told the trainer, Joe West, the same lie I had told them. He told me he wanted me to hit the bag. I didn’t know if I was right-handed or left-handed, and after three or four minutes I ran out the door and threw up everywhere.”

Thomas went an unremarkable 2-1 as an amateur, although did win the Pacific North West Golden Gloves. He had been scheduled to fight at the nationals but was recovering from a broken jaw. 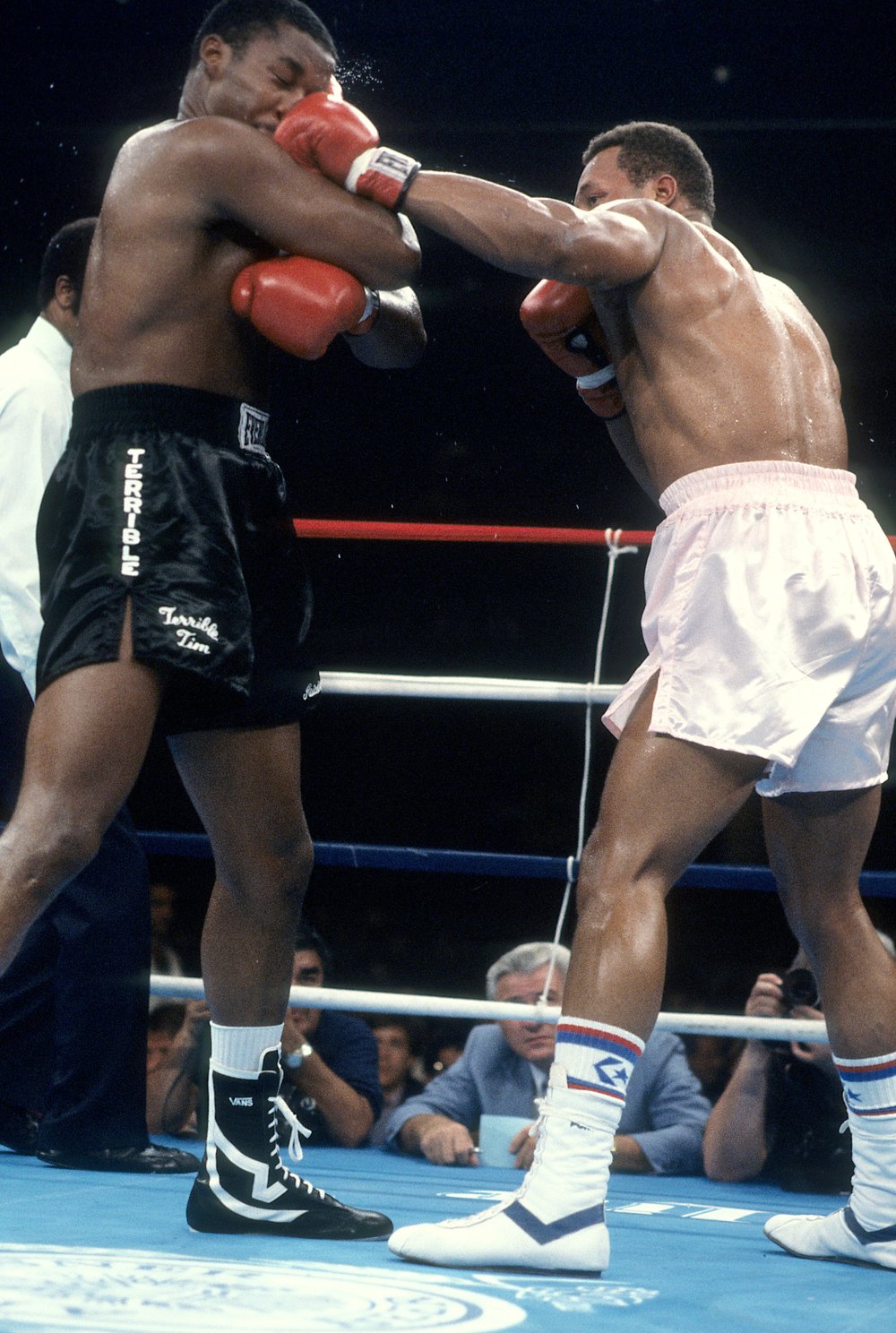 The Thomas jab worked wonders against Tim Witherspoon. Photo by The Ring Archive

When Thomas thinks of his teens, he admits that he’s lucky not to be in jail or worse.

“It’s only through the grace of God I survived the crazy times and the mission I was on. I get chill bumps thinking about it today. I did some very, very stupid stuff. I got lucky, I was blessed.”

Thomas turned professional in August 1978 with a six-round split decision over Ken Arlt. He was helped by manager Roland Jankelson and trainer George Benton. The lone blemish on an otherwise perfect 25-fight record was a draw against future WBA champion Gerrie Coetzee.

In August 1984, Thomas faced Tim Witherspoon for the WBC championship. Prior to this bout, the talented challenger brought in legendary trainer Angelo Dundee who said of Thomas’ lead hand, “It’s as close to a Sonny Liston jab as I’ve ever seen.”

That punch proved crucial as Thomas executed it brilliantly, snapping the champion’s head back countless times en route to a 12-majority decision.

“I never dreamed I could reach that level, I never even set a goal,” Thomas said proudly. “It was the greatest accomplishment of my life at that time.”

The new champion was sidelined for 10 months because of a damaged retina sustained in training, but he returned to stop grizzled former champion Mike Weaver in eight. Surprisingly, Thomas then lost his title in disappointing fashion to huge underdog Trevor Berbick in March 1986.

“I didn’t have Angelo Dundee in my corner, I was going through a divorce, I was making music,” Thomas laments. “I wasn’t doing what I was supposed to do, I wasn’t mentally prepared to defend my title. I lost the fight by one or two points and that was in the last rounds.”

Thomas returned with three stoppage wins before challenging new force Mike Tyson for the WBA and WBC titles in May 1987. “Pink” managed to extend Tyson into the sixth round before being brutally stopped.

“He didn’t impress me at all,” insisted Thomas. “It was just unfortunate that six weeks before the fight I had a shoulder injury. I figured my experience with the left jab [would help me win] ‘cause I didn’t have a right hand ‘cause of the shoulder. I did well for two rounds, then the glove split. It took about nine minutes and 40 seconds to get me another glove which gave him time to rest.

“He stopped me at that time. I wasn’t knocked out cold; he hit me with 16-18 solid shots and I stood up at the end. He punched pretty good, but there was no punch that was gonna knock me clean out.” 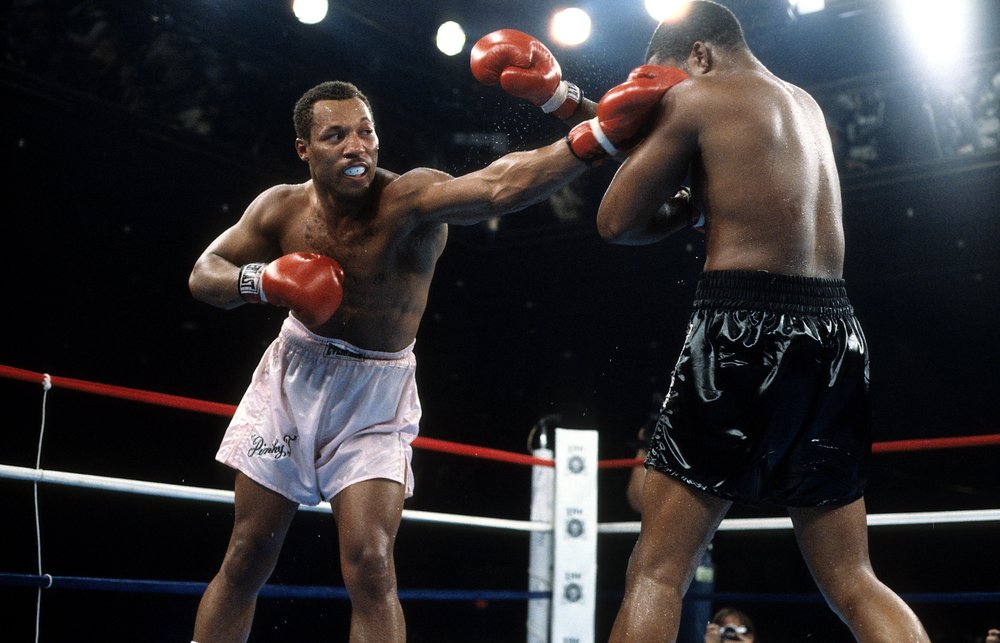 …  and Mike Tyson, at least for a few rounds. Photo by The Ring Archive

After a 19-month hiatus, Thomas returned against Evander Holyfield who stopped him in seven. He also lost fights to Mike Hunter and Riddick Bowe and had clearly slipped.

A first-round knockout loss to Tommy Morrison in early 1991 was really the end, but Thomas continued to fight. He finally retired in January 1993 following a stoppage defeat to Lawrence Carter. His record was 43-7-1, 34 knockouts.

Thomas, who is due to turn 61, is married and lives in Orlando, Florida. He has four children, two with his wife and two from a previous relationship, as well as five grandchildren. He has been clean from all drugs and alcohol for 30 years on Feb. 10.

For over 20 years Thomas has run a non-profit organization called Project P.I.N.K. (Pride In Neighborhood Kids) which teaches youngsters about self-respect, encourages them to get an education and helps them with their athletic abilities.

Thomas also has an autobiography detailing his life called “Back from the Edge of Hell”. He is affiliated with World Sports Alumni (WBA), an organization that works with former athletes and helps charitable organizations in various capacities.

The former heavyweight titleholder graciously took time to speak to The Ring about the best he fought in 10 key categories:

BEST JAB
MIKE WEAVER: I would say Mike Weaver had the best jab, we were exchanging jabs pretty good. I kind of took it away from him when we fought. I was popping him to the body. I had a strategy and I kind of took the play away from him. My jab was powerful and it was fast. I took a lot out of guys.

BEST DEFENSE
TREVOR BERBICK: He was very awkward, he had an awkward style. He wasn’t an easy target.

BEST HANDSPEED
EVANDER HOLYFIELD: I would probably have to say Holyfield because he was moving from cruiserweight to heavyweight. He had fought James Tillis and I was his second heavyweight fight. He had good handspeed at that time.

BEST FOOTWORK
HOLYFIELD: Again, I would probably have to say Holyfield. He had good footspeed; moved really good on his legs.

SMARTEST
HOLYFIELD: It was his foot movement, good handspeed. He had a nice style, I liked his style, I was very impressed by him.

STRONGEST
BERBICK: [Gerrie] Coetzee was pretty strong, Riddick Bowe he was a pretty strong boy, Tommy Morrison. I would say Trevor Berbick; he was very strong, he was a strong man. I think that Trevor had been there before; he’d fought Larry [Holmes], he had fought some tough guys, he had been to war. He did a lot of tree chopping, pull ups on trees, he did some crazy training, he worked hard.

BEST PUNCHER
TOMMY MORRISON: Mike Weaver had a big left hook, a good right hand. He hit me with one punch and I felt it big time. I felt Berbick’s punch. Tyson to be honest, the first round was crazy because he was knocking everyone out. I knew he was going to come out strong like that, but after the second round I kind of had Tyson figured out. He wasn’t really reaching me with big punches. It didn’t happen till after the fifth round when my glove got split; I got hit and my right shoulder popped out. I would say when I got hit by [Tommy] Morrison it was like being hit by a baseball bat. I got hit to the ribs and my leg came up, I got hit with one punch and my eye split. Tommy hit me harder than anyone else I was ever hit by.

BEST BOXING SKILLS
RIDDICK BOWE: I have to revert back to Holyfield. Riddick Bowe had some skills, he was a big man, he had a decent jab and right hand, it was between Bowe and Holyfield. As a heavyweight, I would pick Riddick Bowe.

BEST OVERALL
BERBICK: Bowe was a big, strong, young boy, but I would have to say Trevor Berbick again. Me and Trevor Berbick went 12 hard rounds. I think Trevor at that time had a lot of experience, he was fighting me for the championship. It’s a big difference when you’re defending you title and when you’re just fighting a 10-round fight.