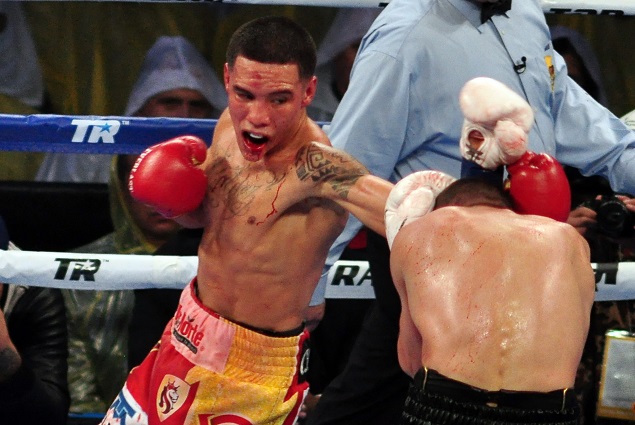 The WBO featherweight titleholder suffered a fractured jaw during the 12-round war — a fight he won handily despite the injury — and then the truly difficult part began. Nothin’ but liquids taken in via straw. Valdez described the pain as a “10” at one juncture in the immediate aftermath; an injection of morphine necessary to numb the incredible discomfort shooting through his face.

The Mexico native is perhaps boxing’s most dependable action star. His reckless style has endeared him with fans, and most importantly, it’s been effective. He remains undefeated and is rated No. 4 by The Ring at 126 pounds.

The 28-year-old returns Saturday on ESPN in his first competition since he suffered that brutal injury. Valdez’s foe, Carmine Tommasone, doesn’t figure to pose a threat, so the beltholder is presented with the opportunity to show he can indeed box a more disciplined fight and straw away from the wild brawls he’s accustomed to.

The bilingual fighter realizes he can’t keep engaging in toe-to-toe slugfests if he wants longevity at the top level. To that end, he linked up with Eddy Reynoso last summer, best known for his work with Canelo Alvarez. It’s one thing to promise a new mindset; old habits always prove difficult to shed. But it can be done. Arturo Gatti employed a more discplined style during his later years and was able to extend his career.

“I think the same personality in the ring will always be the same where everybody will see that same Oscar Valdez, being that aggressive fighter, trying to do everything possible to win the fight,” Valdez (24-0, 19 knockouts) told The Ring on Thursday. “But that doesn’t mean I can’t be defensive in there.

“You have exceptions like Juan Manuel Marquez who are great counter-punchers and they have a great defense and people still consider them a … great action-packed fighter.”

Valdez hopes to perfect his punch-placement and sharpen his defensive skills under the watchful eye of Reynoso in San Diego. He’s been training with Reynoso for the past four months after previously being guided by Manny Robles. Valdez has been out of the ring for almost a year — a career-long layoff as he recovered from that severe injury that he called one of the hardest times of his life — and he’s not expecting everything to click after just one camp.

He’s determined, though, to see this through. Valdez has witnessed too many fighters who had their careers shortened by brutal fight after brutal. They all take a toll, no to mention the countless rounds of sparring ahead of each bout.

“I can be saying all this and maybe one shot, it all can go out the window,” Valdez said. “Because when I fought Scott Quigg, my game plan was to outbox him and I thought I was doing good for the first couple of rounds ’till i got hit and everything we worked on for months went out the window and we had to step it in there and brawl it, so this could be the same thing.

“I have a gameplan, but if it doesn’t work, I maybe have to go back to the old Oscar Valdez and do what I have to do to win. Because there’s no way in the world that I’m taking a loss.”

Sure, he’s just 28, but we’ve seen plenty of fighters shoved through the meat grinder only to see their primes end in their early 30s. Evgeny Gradovich, who Valdez knocked out in 2016, is only one example.

If Valdez can effectively emulate Marquez and Erik Morales — two all-time greats who were party to plenty of fight-of-the-year winners — he’ll soar to new heights. He’s looking to unify titles in his next outing, and Top Rank chairman Bob Arum is looking to put together a fight with featherweight titleholder Josh Warrington.

He’s also willing to move up to 130 pounds in order to attract the marquee fights. First thing’s first, though: ensuring he can do this at top level for a long time. And not just anyone can fight like those two legendary Mexicans.

“This is my passion, this is my hobby. This is what I love to do,” he said. “I’m constantly looking at boxing films, old-school boxing, the new generation. and I want to last in boxing because I wouldn’t know what to do if I’m not boxing. … I gotta discipline myself and invest in better health and better technique-wise so I can last in this sport.”