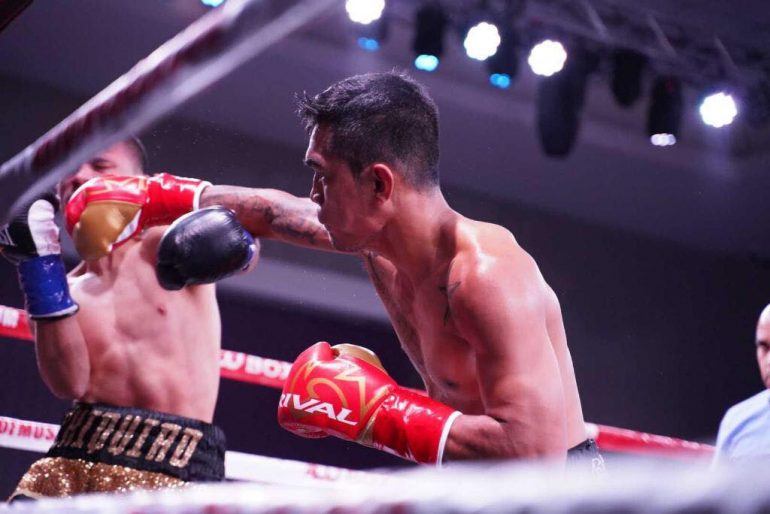 Aston Palicte and team had hoped to be granted a direct rematch with Donnie Nietes after their fight for the vacant WBO junior bantamweight title was declared a draw last September.

Instead, the WBO ruled that Nietes would instead face Kazuto Ioka on New Year’s Eve in Macau, and that Palicte would have to beat an undefeated Puerto Rican named Jose Martinez to get a shot at the winner.

Palicte held up his end of the deal in emphatic fashion, bulldozing Martinez in two rounds at the Viejas Casino and Resort in Alpine, California to earn the mandatory shot at Donnie Nietes and his 115-pound title.

Palicte (25-2-1, 21 knockouts) kept his poise as Martinez (20-1-2, 13 KOs) stormed the taller Filipino in round two, and found his opening with a left uppercut the caused Martinez to briefly touch the canvas with his glove, though no knockdown was called. With no break in the action, Palicte went on the attack, landing long right hands and taking a couple of shots in return as Martinez was forced to the ropes.

The first official knockdown came on a delayed reaction as a left hook to the body dropped Martinez to the canvas. He rose up but was uncomfortable with the tenor of the fight, complaining multiple times to the ref before going down a second time on punches that landed less cleanly.

Referee Raul Caiz Jr. stepped in at the 2:18 mark as Palicte pounded away on a helpless Martinez, earning Palicte the victory.

This was how @AstonPalicte closed out his big win. He floored Martinez for the third time, teed off, and the ref calls it. #PalicteMartinez he’s now the WBO’s #1 contender ????? @ABSCBNNewsSport @abscbnsports @ABSCBNNews pic.twitter.com/B1wqcjHA6k

“Aston is the strongest puncher at 115 pounds and I’m so proud of him.”

Taylor adds that the Palicte and Nietes will have to meet within 120 days, per the sanctioning agreement.

Martinez, who is two years younger at 26, had only had two blemishes on his record prior to Thursday night, when he drew a pair of fights with underrated Mexican boxer Alejandro Santiago.

Nietes eventually won the title that had been initially declared vacant after Naoya Inoue moved up to bantamweight, defeating Ioka by split decision.