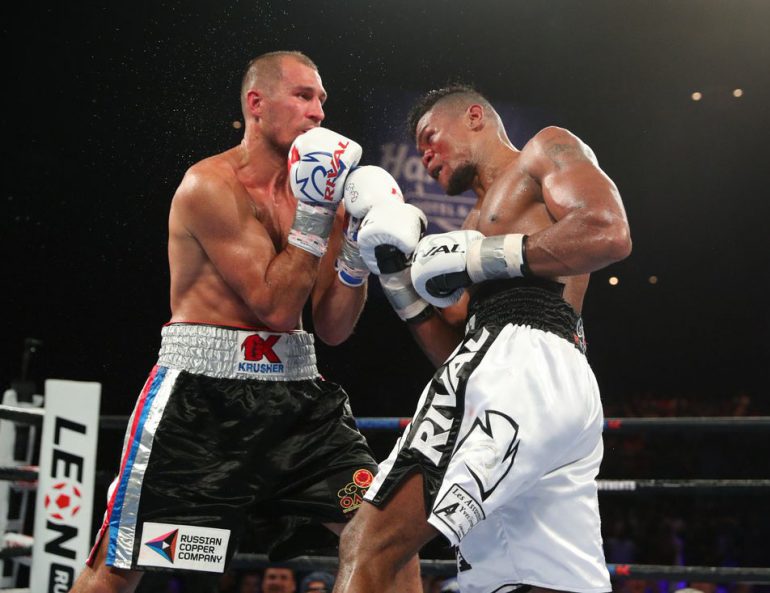 Sergey Kovalev (left) is nailed on the inside by Eleider Alvarez. Photo courtesy of HBO Boxing
30
Jan
by Anson Wainwright

On Saturday, Eleider Alvarez will put his WBO light heavyweight title on the line for the first time against the man he dethroned, Sergey Kovalev, in a direct rematch at The Ford Center at The Star in Frisco, Texas.

The two met last August and Alvarez overcame a slow start to shock the boxing world with a seventh round stoppage, scoring three knockdowns in the process.

Alvarez and Kovalev, who are rated No. 1 and No. 5 by The Ring Magazine respectively at 175 pounds, now meet in a return fight that has will have significant ramifications for the division, no matter who wins.

Can the 35-year-old Russian recover from the mental side of the loss to Alvarez, especially in light of his recent felony charge? Can Alvarez repeat his career-best win, or was that a one off?

DOUG FISCHER: ALVAREZ UD
I have to consider Alvarez the solid favorite. He might not catch lighting in a bottle again with the KO punch, but I think he can outpoint the aging, troubled ‘Krusher’ with a busier jab and quicker hands. 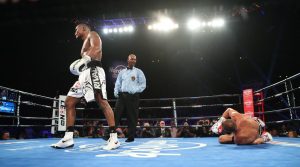 The end is near for Kovalev in fight one. Photo courtesy of HBO

You can say that you get better as you get older . . . and in some spheres, that can be true, but more often in the ‘wisdom’ department than in regard to athletic feats. Sorry, Mr. Kovalev. Once a chin starts to betray you, it typically isn’t something that is easy to rectify. The right hands that bedeviled the Russian against Alvarez last time will do so again, and earlier. Alvarez is no longer the underdog, and I expect him to be 25 percent better, give or take, because being the champ emboldens a certain sort of fighter. Some guys get lazy and rest on laurels, but not in this case. I expect Alvarez to finish off Kovalev quicker than he did last time. Kovalev is 36 in April and the 34-year old Alvarez, who doesn’t have a felony assault charge hanging over his head, will stop him before Round 7.

ANSON WAINWRIGHT: ALVAREZ TKO 10
Very interesting fight. Kovalev was ahead in their first meeting last summer but Alvarez pulled out the knockout shot. Both guys are into their mid-30s so neither is a young pro, they are both what they are at this point. Alvarez has the momentum from the first outing and both men know he has the power to hurt Kovalev. Kovalev has changed trainers again and also has his recent felony charge looming, that can’t help. This fight is very much about where each guy is at this particular point of their careers. It will tell us how mentally strong Kovalev is with the outside the ring distractions. I have a feeling Kovalev will be more cautious and that will see the fight go longer, but Alvarez will get to the bully later in the fight and find the stoppage.

TOM GRAY: ALVAREZ TKO 8
I don’t necessarily think Alvarez is a better fighter than Kovalev, I just think he’s a better fighter than this version of Kovalev. Ever since, he was beaten by Andre Ward, the Russian power-puncher seems to have lost a step. Kovalev is always dangerous early and he has the superior skills, but Alvarez is durable and I think he’s going to come from behind again to produce a near-identical result.

LEE GROVES: ALVAREZ TKO 10
One rule dictating rematches is that a fighter that scores a KO in fight one will do it again in fight two. I believe it to be the case here. First, Kovalev has been stopped twice in his last four fights, and both occurred with startling suddenness in fights that he was either very competitive (Andre Ward II) or winning on the scorecards (Alvarez I). Second, though separated by only a year, Alvarez is not only younger, but also the fresher fighter in terms of fights and rounds fought. Lastly, Alvarez knows for a fact he has the power to stop Kovalev while ‘The Krusher’ still has to prove it to Alvarez. I believe Kovalev’s best chance to win is to launch a ferocious early attack, but if he goes all out, will he have the energy to sustain it? I don’t think so. And Alvarez will be there to take advantage. 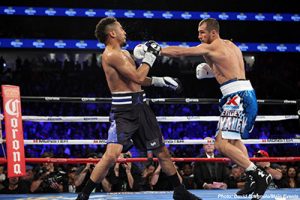 Mulcahey believes Kovalev can outpoint Alvarez by boxing from the outside. Photo by David Spagnolo / Main Events

It is hard for me to admit when I am wrong; because I picked Kovalev to beat Alvarez in their last meeting and am doing so again. Despite Kovalev’s recent slide and Alvarez’s ascent I see Kovalev making one last stand against a well-rounded but not scintillating foe. Kovalev is only a year older than Alvarez and was edging their first fight when he walked into a howitzer of a punch. This time Kovalev plays it a safer and outboxes Alvarez from the outside for the entirety of the fight. I don’t see Alvarez pulling off another Hail Mary punch, and Kovalev will not allow him to get off to as fast a start. It seem counter-intuitive, but I like Kovalev by unanimous decision despite the recent turmoil around him.

NORM FRAUENHEIM: ALVAREZ TKO 6
It’s been a long fall. Almost epic. Sergey Kovalev, a pound-for-pound contender just two-and-a-half years ago, can stop the dizzy decline in a rematch against Alvarez. It has the feel of a last chance. A desperate stand. There’s motivation in that. But the chin and confidence are gone, lost in Las Vegas in November 2016 when Kovalev lost a decision dismissed as robbery by many. Andre Ward won that one and the next one. Ward is retired and the guess here is that Kovalev soon will be. He is 2-2, both losses by stoppage, since the first Ward loss. Dark distractions also loom amid recent reports of a felony-assault charge. Expect Alvarez to do what he did in knocking down Kovalev three times in a stunner last August.

ROBERT DIAZ (MATCHMAKER, GOLDEN BOY): ALVAREZ KO 6
I think the saying of knock him out once and you will knock him out again easier fits here. I will go with Alvarez by earlier KO than the first bout. I believe Kovalev has a lot going on and has been inconsistent. He is a tremendous fighter when focused but that is the question, is he? I say no and I pick Alvarez by KO 6.

TONY TOLJ (MANAGER): KOVALEV SD
Alvarez vs. Kovalev shapes up to be another great fight. I’m also a promoter, so Alvarez will be hard pressed to avoid the trilogy. I believe Alvarez will be the better boxer, but will that result in the decision? Time will tell. Kovalev on points in a very close fight.

TOM LOEFFLER (PROMOTER, 360 PROMOTIONS): ALVAREZ TKO
I was very impressed with the way Álvarez fought in the first fight, rising to the occasion of fighting on the big stage. I see Alvarez building on that experience and winning the rematch as well in similar fashion; late rounds stoppage.

PAULIE MALIGNAGGI (FORMER TWO-DIVISION WORLD TITLEHOLDER/TV ANALYST, SHOWTIME): ALVAREZ
Tough one. How confident is Kovalev now, having been stopped a couple times? He does have the power though, but if he doubts himself and lets Alvarez back him up it could be a tough night.

DUKE MCKENZIE (FORMER THREE-WEIGHT WORLD TITLEHOLDER/TV ANALYST): ALVAREZ TKO
Alvarez vs. Kovalev is a decent fight, unfortunately Kovalev is a little shop worn now. I think Alvarez with his natural youth wins this one inside the distance, late stoppage.

NISSE SAUERLAND (PROMOTER, SAUERLAND EVENT): KOVALEV
I think Kovalev has a point to prove after negative press and losses to Alvarez and [Andre] Ward. As long as he’s living right in the right frame of mind, I think Kovalev wins on points.

VICTOR SILVA (TV ANALYST, COMBATE SPACE): KOVALEV KO
This time it is hard to pick. I’m not sure if Kovalev realized that he does not have time to fool himself with tales about Greek monks, he was winning the first fight but got caught with a tremendous right hand. Alvarez is a great fighter, deserves all the credit and even at 34 he is very hungry. He will raise his level, but I think Kovalev will do it the right way and will win by KO.

JOHN SCULLY (TRAINER): ALVAREZ
I believe that Alvarez will win again. I believe they are two boxers heading in different directions and one gained incredible confidence from the last fight, while the other must have lost a great deal of his. Convincing decision or late KO where Kovalev kind of gives up.

RODNEY BERMAN (PROMOTER, GOLDEN GLOVES): ALVAREZ KO
It’s plain to see – Kovalev not the same ‘fighter’ he once was. Alvarez has his number – the result will be the same, again inside the distance.

PETER SMITH (TRAINER): ALVAREZ KO
I really lean toward Alvarez to be victorious. I think Kovalev is limited in certain areas in his defense and I think Alvarez will be the smarter fighter the second time around, more familiar with Kovalev. Kovalev is quite a strong puncher, but I find him one-dimensional. I predict Alvarez will stop him this time around. I think this will be pretty much be end of the road. Alvarez by KO. I think Alvarez is the future for the division, he’s really coming up, he’s really proven his dynamics and his ability to take out the best. I’m really excited to watch the fight.

SEAN GIBBONS (MATCHMAKER): ALVAREZ TKO 9
I feel that Kovalev has seen better days. Alvarez is hot and will duplicate more of the same game plan in the second fight. I like Alvarez again by late stoppage in nine rounds.

BARRY JONES (FORMER WORLD CHAMPION/COMMENTATOR): KOVALEV
When a fighter of Kovalev’s experience suffers a loss against an up and coming fighter, it’s quite often a sign that his time of dominance is at an end. Álvarez is obviously a good fighter but I never saw anything in him to suggest that he could beat Kovalev, let alone KO him. But he has skills and knows how to win whatever the fashion. Saying all that, Kovalev was ahead and cruising to victory in the first fight and I expect it to be the same again, but this time Kovalev to be a little smarter and to pound out a conclusive 12-round win.