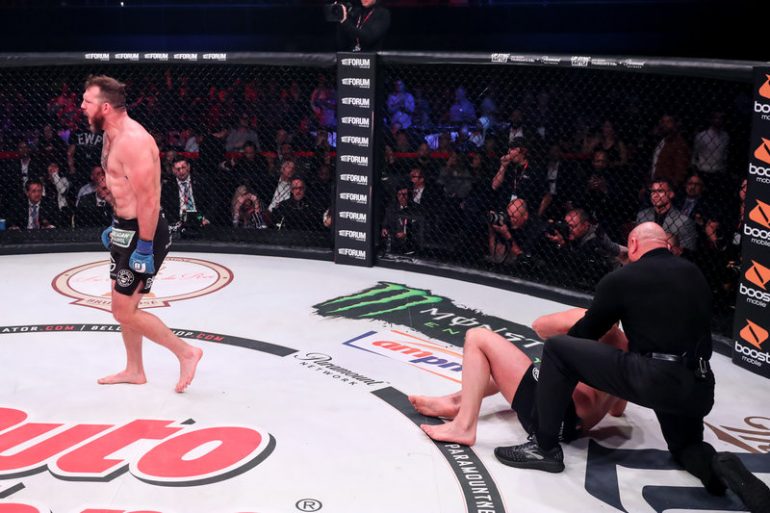 LOS ANGELES – Ryan Bader claimed the Bellator Heavyweight Grand Prix title here at The Forum with a devastating left hook, right hand combination to finish legendary Russian Fedor Emelianenko in just 35 seconds and write himself into history. It made Bader, of Arizona, a champ-champ in the burgeoning fight league owned by media conglomerate VIACOM. Bader’s ascent to become both light heavy and heavyweight champion was shown simulcast on Paramount with OTT streaming service DAZN also airing the event.

Emelianenko dropped to 38-6, while Bader racked up his 27th victory. Bader was magnanimous in victory.

“He’s one of the best to ever do it,” Bader said in his cage interview with John McCarthy following the quick finish. “To win the heavyweight title against that man . . . ” 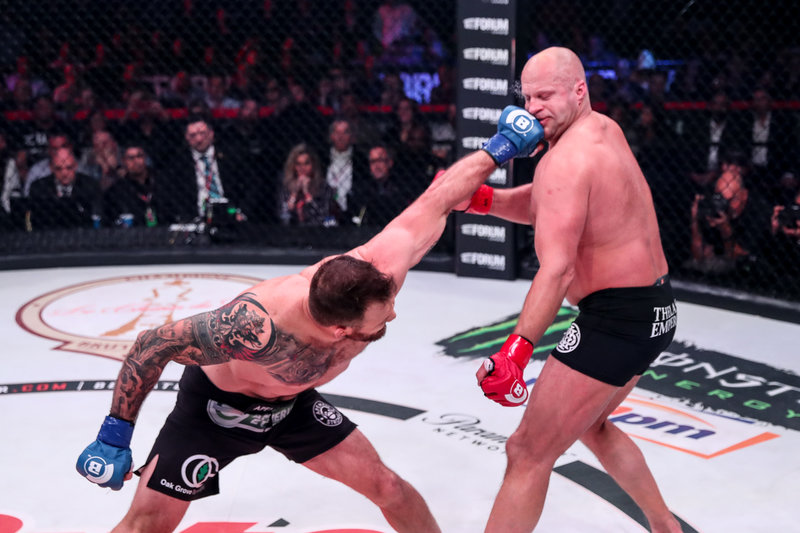 Bader, 35, said he had blocked out the historic performances Emelianenko has enjoyed during his career as a former Pride Fighting Championships heavyweight champion who reigned with 27 consecutive victories over a decade before a 2010 loss to Fabricio Werdum in San Jose.

“I was trying to keep [those thoughts] away . . . not only that, there’s a lot at stake with the title on the line,” Bader said. “It’s surreal. What a night.”

Bader, who had prepared to use his standout wrestling skills and renowned cardio to nullify Emelianenko revealed that he had consistently practiced throwing the left hook off his jab. “I saw him go down pretty hard. We practiced that [punch for when] he was setting up that right hand,” Bader said.

The new double champion also added that he is prepared to defend both belts when the time and opponents presents themselves. Scott Coker, CEO of Bellator, said that Bader now belongs in “the top three pound for pound in MMA”, adding that “his striking is getting better and better. It’s up to Ryan (where he fights), as long as light heavy is not jammed up. We will give him leeway to defend, but he will defend the light heavyweight title first.” 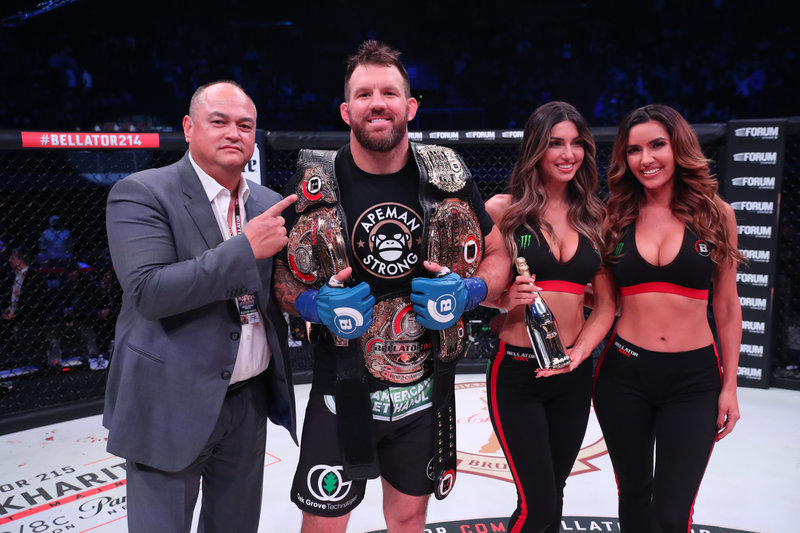 On the potential retirement of Fedor, Coker added: “My job is to put the best fighters in there. Fedor seemed to be ok afterwards, not seriously hurt, but it is never easy to see your friends get hurt or knocked out. It is up to him (whether he retires or not). He fought for me in Strikeforce. It’s up to him, the truth is he does not need to fight again. His contract is over.”

Coker was insistent that the Russian fighter remains one of the greatest ever, if not the greatest. “That one run, undefeated for 10 years, in boxing MMA or combat sports in general, he did not dodge anybody. He’s the GOAT, that’s it. He fought everybody.”

“The tournament was a very good piece of business; it went out in 160 countries around the world. We didn’t just have a tournament, but we had eight of the great names, and brands in the sport.”

Coker later told The Telegraph that he would like to see Fedor have a retirement tour. “Maybe he fights in Tokyo, New York, Moscow, having fights, not against 30-somethings in their prime, but matched with fighters who fans want to see.”

As with the main event, there was another brutal finish recorded in the co-main event.

Henry Corrales responded to a right uppercut knockdown from fellow Whittier fighter Aaron Pico, his counter right hand landing flush on Pico’s jaw. The fight was over at 1:07 into the first round. Pico might have used his fine wrestling when Corrales was hurt, but the bout became a defining moment for Corrales, trained in Arizona by John Crouch and Benson Henderson. They are some team.

“What’s done is done. Who the [heck] is next?” Corrales asked inside the cage. “That’s five straight [victories while training in Arizona]. I’ve got my stuff together.” Corrales, Coker commented, put himself into title contention with the triumph.