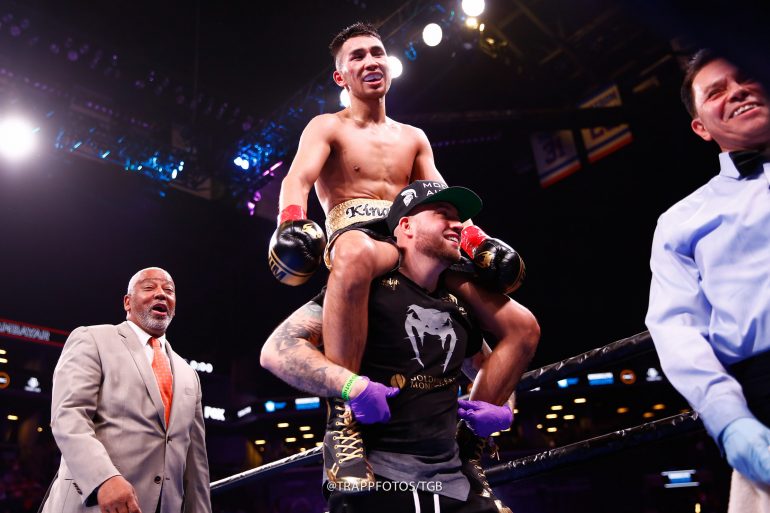 NEW YORK — The vision is precise, and certainly tells the mind in light-speed time what to do and when to react. That’s all Tugstsogt Nyambayar, the Mongolian 2012 Olympic flyweight silver medalist, needs.

Just that sliver of an opening. Just that minute drop of a glove.

He lands with accuracy, and thudding impact, and the game southpaw Claudio Marrero was able to uphold the frequent barrages. He just couldn’t stave off the fissures in his defense that “King Tug” mined.

In his biggest challenge to date as a professional, King Tug won a twelve round unanimous decision over Marrero in the WBC world featherweight title eliminator on the FS1 portion of the PBC on Fox from Barclays Center on Saturday night.

“We had a really good camp so this is just me putting the pressure and pace that we worked on in camp and using it in the ring,” said Nyambayar, after going twelve rounds for the first time in his career. “This sets me up for big fights. Whatever big fights are presented to us, we’ll take it.” 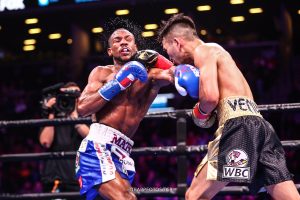 In the 10th, referee Benjy Esteves took a point away from Marrero for hitting Nyambayar on the break. With a welt building below Marrero’s left eye, King Tug engaged again and even landed a low blow, but Esteves didn’t charge Nyambayar with a point.

In the last round, Marrero wanted to battle Nyambayar, but he attacked wildly, and Nyambayar picked him apart with piercing counter rights. Then, Nyambayar thought he would have some fun in closing, hopping around the ring with his arms up.

If Chris Colbert wanted to garner attention, he certainly did with his fluorescent pink look on the top of his head, to the bathrobe he wore into the ring, complete with white fur around the collar.

Colbert, the Brooklyn-based fighter known as “Little B-Hop,” was facing a challenge in Joshuah Hernandez (8-2, 7 KOs) a sinewy, skilled fighter from Chicago who had just lost once prior to meeting Colbert.

The pair fought in close quarters in the first two rounds, with Hernandez sporting a bloody nose for his efforts.

In the third, Colbert (10-0, 3 KOs) showed he could fight southpaw or orthodox, switching things up on Hernandez and making him hesitant. Through four rounds, Colbert had outlanded Hernandez 76-34.

Hernandez tried crowding Colbert in a corner in the fifth, though, to no avail. Colbert bore through the slight onslaught, and even landed a hard right. Too bad Colbert doesn’t possess heavy, one-punch power.

The pair finished the sixth with a wild exchange, after Colbert motioned with his glove to incite Hernandez into coming forward. The two then blasted away until the bell closed the round.

It was a spirited brawl in which Colbert came out ahead.

“He put up a great fight,” Colbert said about Hernandez. “Today I decided not to give the crowd a boxing lesson, I decided I wanted to show them that I can stand and fight with anybody if I choose to. We’re going to keep making these fights easier and easier.

“I have very high-quality fight and I’m getting better and better as we go. I’m looking forward to getting more opportunities.”

In a scheduled six-round super lightweight fight, Antuanne Russell (8-0, 8 KOs) stopped very overmatched Roberto Almazan (7-9, 2 KOs) at :59 of the second round with a pair of knockdowns, both off of right hooks off the top of the head.

It wasn’t much of an exhibition. Russell was clearly the superior fighter and Almazan appeared in survival mode from the opening bell. It didn’t take long for referee Shada Murdaugh to see enough and wave it over.

“I listened to my corner’s directions and they told me that the hook was going to be there when he shot his left hand,” Russell said after what amounted to a sparring session. “I went to my hook position and I was ready to catch and fire.

“This is nothing new to me. I just try to execute what I’m told and sharpen my craft. We’re going back to the drawing board and we’ll be patient.”