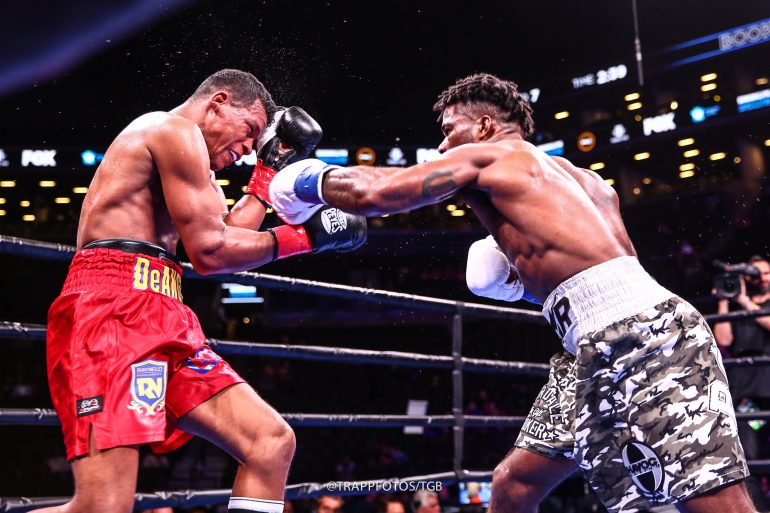 NEW YORK — Chordale Booker (14-0, 7 KOs) easily defeated Juan De Angel (21-10, 19 KOs) by an eight-round unanimous decision on the Keith Thurman-Josesito Lopez undercard at Barclays Center in Brooklyn. The official scores at ringside were 80-71 on one card and 79-72 on the other two.

Making his fourth appearance at Barclays Center, the 27-year-old Booker scored the only knockdown of the bout in the seventh round when he hurt De Angel with a body shot causing the Colombian fighter to bend over and take a knee. With his left eye almost closed, De Angel managed to evade the southpaw Booker’s right-handed jab and survive the round.

“We always work on attacking the body, ever since I’ve started. I’ve always been a good body puncher and get great leverage on those punches,” said Booker.

Booker put the pressure on again in the eighth and final round chasing De Angel around the ring looking to add a punctuation point and end the bout in spectacular fashion. A left shot to the body hurt De Angel again sending him into the ropes and away from further punishment by Booker.

The only meaningful moment in the bout for De Angel was in the second when Booker walked into a right hand after leaving his left out there a moment too long. Booker recovered quickly and landed a fiery combination of his own to move De Angel into the corner. Booker had De Angel stunned again in the fifth round and had a seemingly defenseless De Angel in front of him but rather than risk a counter shot back at him Booker decided to keep working behind his jab and snapped De Angel head back.

Booker is continuing to make his climb up the junior middleweight rankings and is coming off a first round knockout victory over Jason Wahr last November in North Carolina. After winning multiple New York City amateur tournaments Booker moved to Connecticut.

“I’m about to make a list of fighters that I want to face to propel me to the next level. I’m going to keep climbing and fighting better opponents. I thought I had a good performance today, but not great. I feel like I showed that I have a lot I can do in this sport,” said Booker.

Philadelphia’s Stephen Fulton improved to 15-0 (6 KOs) with a fifth-round TKO victory over Marlon Olea 13-4 (12 KOs). The official time of the stoppage was 41 seconds of the fifth round.

The lightning-quick Fulton scored two knockdowns in the bout in which he dominated from the beginning. The first knockdown came in the second round when a Fulton measured Olea with a lead left hook that landed clean and put the Colombian Olea down.

Fulton put Olea down again in the fourth round with a sharp three-punch combination that hurt Olea. In the fifth round it became evident that Olea went into survival mode and stopped trying to compete. A one-two combo almost floored Olea again but before he could try to fall into the ropes the referee decided he had enough.

The 24-year-old Fulton is coming off victory over German Meraz last September in California and spent time in camp with Carl Frampton last year.

Middleweight prospect Mark Duncan (3-0, 3 KOs) defeated Daniel Flores (0-3) by TKO in the third round. The official time of the stoppage was 1:46.

The accumulation of punches in addition to a nasty cut over Flores’ right eye was enough for the referee to stop the bout. The 31-year-old Duncan got off to a fast start in the opening round hurting Flores several times including opening up the gash above the right eye with a clean punch.  The Clarksburg, Md. native is coming off a first round TKO victory over Ray Cervera at Barclays Center last month on the Charlo Brothers undercard.

In welterweight action Tyrek Irby (6-0, 2 KOs) defeated Jonathan Figueroa (2-2, 1 KO) by four-round unanimous decision. The official scores at ringside were 40-36 and 39-37 on the other two.

The 25-year-old Irby was too fast and sharp for Figueroa who had trouble keeping up with the Maryland-native. Irby stunned Figueroa twice in the second and again the last round by landing clean combinations starting with the body then going back up top.

Irby is coming off unanimous decision victory over Lamont White in his hometown of Maryland late last year.

In the opening bout of the evening super middleweight prospect Mycheal Teal (2-0, 2KO’s) scored a first round knockout of Jacob Landin (0-3). The official time of the stoppage was 30 seconds. The 24-year-old Teal is a gym mate of Keith Thurman and is trained by Dan Birmingham.