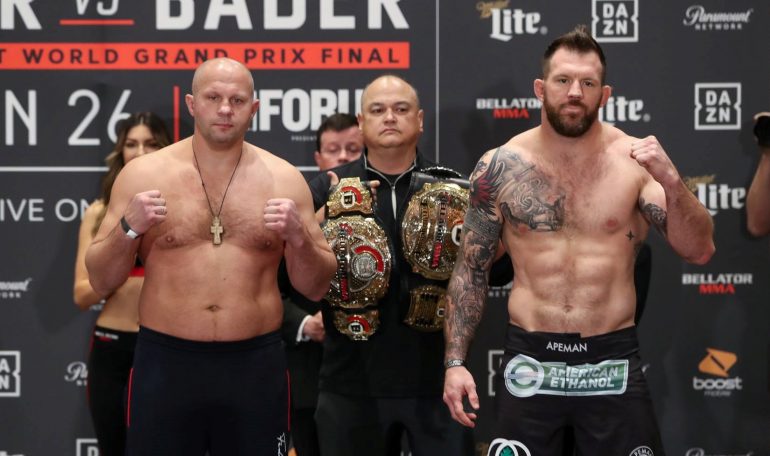 LOS ANGELES – Big night for Bellator at The Forum, Inglewood. The final walk, potentially, for Fedor Emelianenko, the great Russian MMA heavyweight regarded as the greatest of all-time. The final of the fight league’s heavyweight grand prix tournament, which has been a major success and sees American Ryan Bader pitched against Emelianenko in his bid to claim the title, having already claimed the light heavyweight crown. Bader has heavy hands, and brilliant wrestling.

The two are matched in weight and height. Bader is the less weather worn, in the pomp of his career, and the favourite. It’s likely that Fedor will go all-out early, and if Bader (26-5 in MMA) can weather the onslaught, the 36-year-old from Chandler, Arizona, has a great opportunity to claim the greatest scalp he will ever have on his record.

The Russians are here in force, to witness the berserker, explosive Sambo style that saw Fedor (38-5-1 in MMA) undefeated in a run of 27 victories between 2000 and 2010, when he lined up a Who’s Who of the great fighters, coming through adversity to defeat them all in their pomp in Japan and in the USA: Antonio Nogueira, Mirko CroCop, Mark Hunt, Mark Coleman et al. At 42, Fedor is likely making his last walk to the cage.

For “The Last Emperor”, that time of retirement may well have come. That’s not to say there are still not great performances in him. Working out, the speed and power were there this week on media day as he cracked the 4oz gloves into the pads of trainer Peter Theiss. He is still revered, still considered the greatest heavyweight of all-time. Still carries a profound aura and presence.

He has never had a bad word to say about his opponents. Never gloated. Never glowed even. There are few who do not admire the great Russian bear.

A former champion in Japan’s PRIDE Fighting Championships, a former Strikeforce title contender and one of the few names the UFC tried, and failed, a few times to sign, Fedor joined Bellator through his association and friendship with its fight league president Scott Coker.

“This is a huge event for us as we see the culmination of the heavyweight grand prix, and the rise of a new set of stars,” explained Coker, the CEO of Bellator, which is owned by media giants Viacom. Last year, the fight league signed a three-year 140 million U.S. dollar deal with DAZN, the OTT streaming service. DAZN have exclusive rights to eight events annually.

The card is replete with show-stealers including a fight between rising prospect Aaron Pico and Henry Corrales, a pair of Los Angeles natives from different sides of the tracks. Pico is highly touted, a gifted boxer – and wrestler – who has designs on becoming a world champion in MMA, and in boxing. He trains with Freddie Roach at the Wild Card Boxing Gym. There is even talk of him departing MMA for a year to try to qualify as a wrestler for Mexico at the Tokyo 2020 Olympic Games.

Corrales, a veteran of 32, with a record of 16-3, is up for this. It’s likely to be a fight in a phone box. “If he (Pico) wasn’t finishing these guys, he’s highlighting reeling these guys, he wouldn’t be so talked about,” admitted Corrales to me this week. “His amateur career is pretty legit. He’s a high-level wrestler. Golden Gloves boxer. It’s part of the game.”

They are both from Whittier. “Same area, yep. We never crossed paths. There’s a ten-year gap. My people don’t even know of his people. I’ve never seen him, just heard about him. Different backgrounds too. He grew up in an athletic field. The dark arts brought me to the martial arts. I didn’t grow up playing sports, I was just being a clown and an ill-disciplined little f—. Different background and different circles.”

But it is an all-Hispanic showdown. Corrales has ‘Guerrero Azteca’ tattooed on his chest, depicting a lion’s head behind a cage. “Mexicans want to fight. It’s in their blood. I guess the knowledge isn’t there because of the generations of boxing. They absorb the knowledge of boxing, they’re familiar with the sport. But it comes to MMA, they’re just as big fans. I’m Mexican American. I guess there’s not too many who just do MMA.

Then the rub, and the difference in backgrounds. “I’ve been stabbed back in the day by a Mexican that looks like Pico,” offers Corrales. Motivation enough, it seems Pico, for his part, cannot wait for the challenge in this step up in class. “I think it’s going to be a great fight,” Pico told me this week. “But I don’t think it’s what he thinks it’s going to be. People don’t know I have it all. I can stand on my feet and wrestle too. I’ve been working a lot on the ground. Obviously, I can box and fight on my feet. I know what I’ve got to do to win.”

Once a formidable wrestler, he now delights in the stand-up. “Absolutely, I love fighting for the knockout. That’s what people remember. That’s what people remember Mike Tyson for. I want people to know Pico could do it all but, ultimately, he knocked a lot of people out. His fighting style is a real brawler type. But a lot of people underestimate my quickness in my punches in those four-ounce gloves. It’s a whole different ball game, the way I’m able to punch. It’s crazy. I feel comfortable on my feet. I could have made a run at the Olympic boxing team. I’ve boxed with all those guys on the team. I definitely have made a big impact in boxing. But life took me in a different direction. I’m happy with that because I was able to travel the world. I think I would have been a better boxer than a wrestler, 100 percent.”

Pico, as mentioned, does have clear ambitions as a boxer. “MMA is the priority right now, but I will get boxing fights. I’m not sure when, I’ll have to sit down with everybody. But if it was up to me, if I’m healthy between fights I don’t know why I can’t do both.”

“I’m pretty sure Bellator will let me box. Scott Coker is a very open-minded guy. He knows I’m representing Bellator and MMA fighters. One thing about me going into boxing, it won’t be a sideshow. I want to make a big impact in boxing. I really, really feel I can do that. I spar with a lot of guys, and I’m doing MMA all week, but spar with boxers who are doing it every day. I’m holding my own.”

In this era of combat sports, we have the crossovers too, and there is an intrigue, a fascination to the MMA debut of WWE star Jack Swagger – or to give him his real name Jake Hager – as a heavyweight here at the event. On the eve of his transition into the toughest proving ground in sport: heavyweight MMA fights getting punched in the face with 4oz gloves by 250-pound men who want to take your head off, or snap your limbs, he told me: “I’m making MMA great again for pro wrestlers. I don’t know if I’m trying to confuse MMA fans who are new to me with four different names, but it’s a work in progress. I definitely want to bring that persona, charisma and character into the cage.”

But this is a long way from the long-legged spandex of the WWE, where he was a champion. Hager was a formidable college wrestler in the United States and a very decent American football player for the University of Oklahoma (where he graduated in finance, for the record). Not since Brock Lesnar crossed into MMA from WWE has such a name made the great leap of faith. And there are risks.

“Oh, it’s a huge risk, a very big investment in myself and my abilities,” acknowledged Hager. “But I think if you look at life, that’s how you accomplish the big things. In 2016 and 2017, I wasn’t in a good place. I’d been on the road for 12 years, I was drinking too much. I needed to get back to who I was. This was a way for me to better myself. Be better than my past self. That was really important. I feel with all that’s happened in the last year and a half, I’ve already won.” Swagger’s debut opponent is a six-foot journeyman JW Kiser who is 1-1 in MMA. It ought to be a gentle opener, but you just never know in an MMA heavyweight fight.

The Forum will be buzzing for the Bellator fight league’s 2019 opener tonight, in which history will be made, and when a huge chapter may close with the presence of greatness in Fedor Emelianenko.