Jaime Munguia: I’m not going to back down and neither will Takeshi Inoue 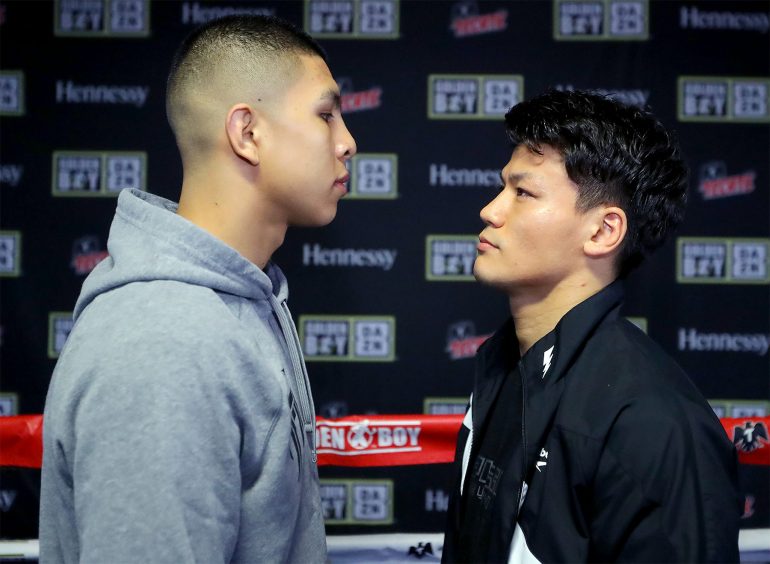 Jaime Munguia has a clear height and size advantage over Takeshi Inoue, but the Japanese challenger is expected to bring the heat on Saturday. Photo / HoganPhotos
25
Jan
by Francisco Salazar

Life has changed dramatically for the unbeaten Jaime Munguia over the last several months.

Around his time last year, the hard-hitting Mexican was preparing to face Jose Carlos Paz of Argentina in a small arena in Cancun. However, just over three months later, Munguia was celebrating a WBO junior middleweight title victory over Sadam Ali and had kicked open the door to stardom.

This Saturday, Munguia, who is rated No. 3 by The Ring at 154 pounds, will make his third defense against unbeaten Japanese contender Takeshi Inoue at the Toyota Center in Houston, Texas.

Inoue (no relation to Naoya) has never beaten a contender or fought outside of Japan. However, despite betting odds overwhelmingly in his favor, Munguia refuses to overlook his next opponent.

“He’s dangerous,” said Munguia in a phone interview with The Ring earlier this week. “He takes punches and is strong. He has a dangerous right hand and has scored a lot of knockouts with that right hand. That is what makes him dangerous and difficult to train for.”

“Japanese fighters are similar to Mexican fighters. They leave everything in the ring and they do not care if they take a lot of punches in the process. That is what I’m more worried about. He goes forward and throws a lot of punches. I’m not going to back down and neither will he. I think it will be an interesting fight.”

Munguia, who resides in Tijuana, Mexico, has been a professional for six years, but some boxing insiders have wondered whether he is mentally and physically ready to face the other elite fighters in the division, including unified titleholder Jarrett Hurd.

The 22-year-old Munguia does have a mandatory assignment to fulfill against Australia’s Dennis Hogan, so a unification fight would probably have to wait in any case.

“After the Inoue fight, I don’t know if the next fight, or the following fight, is when I have to fulfill my mandatory,” said Munguia, who is co-promoted by Golden Boy and Zanfer Promotions. “All I know is I have to fulfill that obligation later this year.”

Munguia (31-0, 26 knockouts) would like to unify the 154-pound division, but he has other goals he wants to fulfill. One of those is to move up in weight and face Gennady Golovkin at 160 pounds. Munguia almost secured that fight last year, when the Kazakhstani power-puncher sought a replacement for a then-suspended Canelo Alvarez. However, the Nevada State Athletic Commission refused to sanction the bout.

“I do look forward to fighting Golovkin in the future,” said Munguia. “I have the size and height to move up in weight and fight at 160 pounds. Maybe in a few fights, I can even fight at 168 pounds. I don’t see a problem moving up in weight. I think I’m physically bigger than some of the fighters in that division.”

Munguia is still learning under trainer Roberto Alcazar and it will be interesting to see when his team elect to take on the best at 154 pounds. That may take a while as Munguia, along with other Golden Boy fighters, is signed to a deal with DAZN, whereas Hurd, Jermell Charlo and Tony Harrison are aligned to PBC and fight on Showtime or FOX.

Those are compelling fights for Munguia, but for now he is fully focused on Inoue (13-0-1, 7 KOs) who will be determined to spring the upset.

“This is the biggest fight of my career,” said Munguia. “It was honor to fight on the same card as the rematch between Canelo and Golovkin. But I want to make my own history. I want to leave my thumbprint on boxing.”

“I think I’ve changed a lot (for the better) in my responsibilities because there are a lot of people that depend on me. I’m working hard for those people that have faith in me and believe that I can be someone. I don’t want to short-change them.”