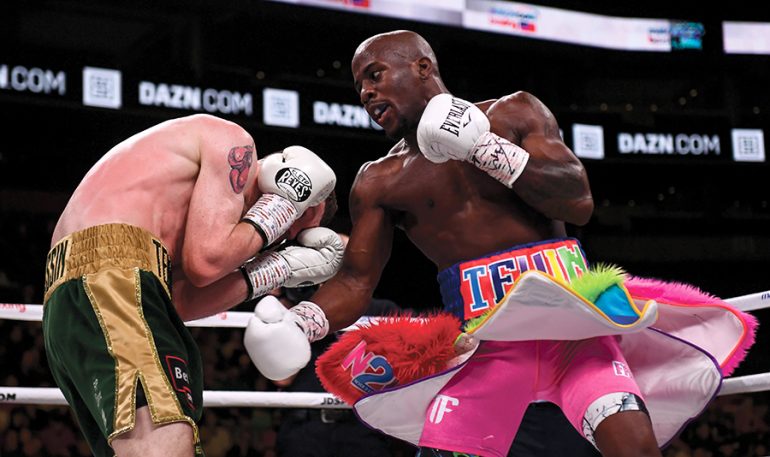 Super-slick southpaw Tevin Farmer will defend his IBF junior lightweight title against Jono Carroll at the Liacouras Center in Philadelphia on March 15.

Farmer, who is rated No. 3 by The Ring at 130 pounds, and Carroll have been involved in bitter social media spats and will come face-to-face for the first time at a press conference to launch the fight in Philadelphia next Tuesday, and both fighters believe the fight will be as fiery as the build-up.

“He’s got a world title shot on St Patrick’s weekend, he should be thanking me,” said Farmer (28-4-1, 6 KOs). “He’s trying to get under my skin but it’s impossible to get under my skin. He’s making himself look bad, and he’s stepping up to a whole different level with me. I’m A-level and he’s going to pay.

“He says we both come from tough backgrounds, the hood, that boy hasn’t come from any struggle, no hood. I’m going to show him when he comes to Philly, he’s going to eat his words. He’s trying to get his buzz up but there’s certain things that you don’t say. He’s made this personal and you don’t want to get personal with a Philly guy like me.”

“It is only fitting that Tevin Farmer’s remarkable journey in boxing and in life comes back to his home city, Philadelphia,” said promoter Lou DiBella. “This is the homecoming Tevin deserves, and if Jono Carroll fights with the same fervor that he talks, it will also be a fight befitting of a city that has long been synonymous with all action wars.”

Unbeaten Dubliner Carroll (16-0-1 3KOs) will be taking part in his first world title bout following a split decision draw in a final eliminator with Guillaume Frenois in Sheffield, England, in December.

“I’ll do what I want with Tevin, he’s a tiny little child and I’m not afraid of him,” said Carroll. “When we meet, if he’s respectful of me, I’ll be respectful back as that’s how I’ve been brought up – but if he comes talking rubbish then I’ll put him in his place.

“I see a fakeness in him when I see him interviewed, I see a fake person. My thoughts on him are that he wants to be liked, but he’s not. I reckon he’s arrogant, that’s the man I think he is and I know he’s that sort of flashy person saying stupid things on Twitter.”

Irish sensation Katie Taylor can take a giant step towards her goal of becoming the undisputed lightweight champion when she bids to unify her WBA and IBF titles against WBO counterpart Rose Volante.

“Ever since I won my first world title as a pro my goal has been to unify the lightweight titles so this is obviously a massive step towards that,” said Taylor.

“Volante is unbeaten so I’m expecting a tough fight but that’s exactly the kind of challenge I want. I think the better the opponent and the bigger the challenge the better I will perform.

“I can’t wait for March 15 at the Liacouras Center,” said promoter Eddie Hearn. “It’s our first ever event in Philadelphia and it’s an honor to promote in this great city on St. Patrick’s weekend.

“Tevin Farmer is one of the great boxing underdog stories of our generation, and I’m so happy he is getting the chance to bring that world championship home against a feisty and talented Jono Carroll.”

Content and quotes courtesy of a press release issued by Matchroom Boxing.

This show will be aired live on DAZN in the U.S. and Sky Sports in the U.K.