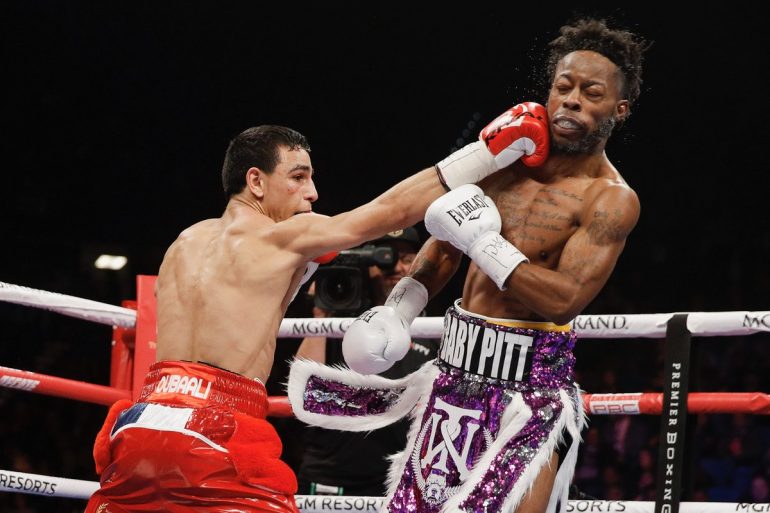 LAS VEGAS — After nearly a year, the WBC finally has a bantamweight champion.

Nordine Oubaali won the tough contest at the MGM Grand on the undercard of the Manny Pacquiao-Adrien Broner fight. The unanimous decision came with scores of 115-113, 116-112, and 117-111 from the judges.

Oubaali had narrowly defeated Warren in the 2012 Olympics, 19-18, though Warren has seen more action and tougher opposition in the professional ranks.

Getting reacquainted in the first round, the pair traded shots, with Oubaali landing a slick right hook to the cheek of Warren. Oubaali spent the second round going straight forward, throwing shots, while Warren was content looking for counters, though nothing of substance landed from the Cincinnati native as Oubaali dipped in and out.

Oubaali kept up the pressure in the third and had some openings as Warren was momentarily trapped in the corner. As the round came to a close, Warren finally found his chance and got a couple nice shots in upstairs, potentially stealing the round from the busier Oubaali.

A more confident Warren began pressing the action in the fourth and found a home for his uppercut on the chin of Oubaali. Not swayed with his power, Oubaali continued to dish out shots of his own as the pair continued to calculate their opponent’s movements in the ring.

A more relaxed fifth saw Oubaali again throwing more shots than his opponent though neither was very active. Warren again waited until the end of the round before becoming active, perhaps using a strategy to seem busier and fresher in the eyes of the judges during the closing seconds.

The seventh saw the most exciting action with the crowd coming alive as the two traded several power shots in the final thirty seconds. Oubaali struck him with three power punches upstairs with Warren landing a solid two of his own, during the flurry.

With the nickname “Baby Pitt” Warren found himself in a dog fight. The rugged Oubaali bullied his way into Warren’s zone several times in the eighth and ninth, finding more space for his right hook that continued to land again and again.

Warren pressed in the eleventh, probably being told he needed a knockout to win. The defense from Oubaali adjusted nicely with stellar footwork. The last championship round was more of the same as the Frenchman of Moroccan descent won his first world title.

“I put on the pressure. I had the speed.  He is a very good boxer – he’s slick, and he’s smart.  This is a very big night to win my first world championship.”

Oubaali had been scheduled to face Petch Chitpattana last summer for the title in Paris before French networks ran into financing problems. Chitpattana lost to Takuma Inoue in Tokyo in December 30th. Takuma is now the mandatory for the WBC title and is expected to fight Oubaali next year.