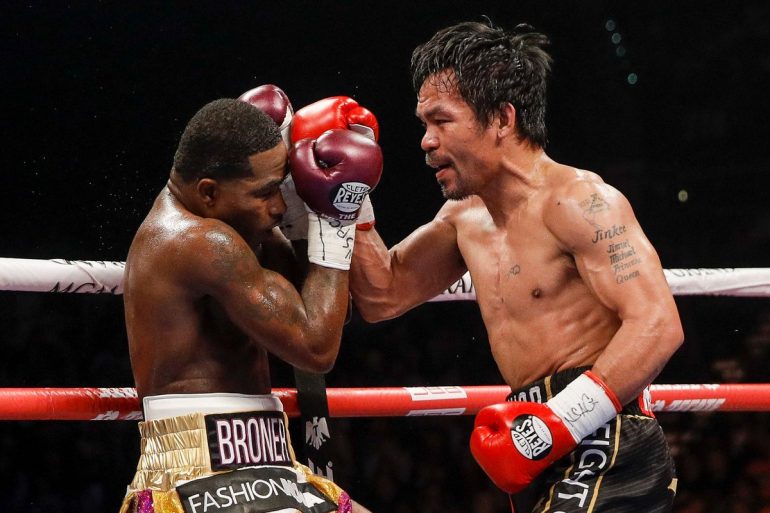 Even the 40-year-old version of Manny Pacquiao was too much for 29-year-old Adrien Broner to handle. Photo / @ShowtimeBoxing
19
Jan
by Mike Coppinger

LAS VEGAS — Manny Pacquiao told anyone who would listen he was on a mission.

A mission to prove he’s still a force to reckoned with, even at age 40. Pacquiao did just that with a dominant performance in his first U.S. fight in over two years. 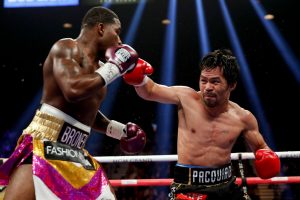 Pac still has some attack.

He hurt Adrien Broner badly several times, though he scored no knockdowns, and controlled the action from the onset. He’s not the wrecking ball of old, but this version of Manny Pacquiao is still pretty damn good.

The bout was Pacquiao’s debut under the PBC banner, and with so many talented welterweights advised by Al Haymon, there’s a wealth of high-profile matchups at the Filipino senator’s disposal.

There’s no bigger fight, of course, than a rematch with Floyd Mayweather, who sat ringside and watched Pacquiao beat Broner pillar to post.

“At the age of 40 I can still give my best. Although I wanted to be aggressive more, my camp told me don’t be careless and to counter him and wait for opportunities. I proved in my last fight against Matthysse and now I proved it again. The Manny Pacquiao journey will still continue.”

What happens next for Broner (33-4-1, 24 KOs) is a different matter. He never could get over the hump in high-profile fights. The former four-division titleholder has now lost to the likes of Pacquiao, Marcos Maidana, Shawn Porter and Mikey Garcia. Broner’s best career-victory remains a controversial decision over Paulie Malignaggi in a 147-pound title fight.

To the astonishment of those at ringside, Broner jumped up on the ring post and beat his chest after the final bell in a bout he failed to compete in. Broner connected on just 50 punches total, per CompuBox. He didn’t land more than seven punches in any given round.

And in a fight he was clearly losing, Broner elected to survive rather than press the action. What else is new? The 29-year-old landed only one punch in the final frame. 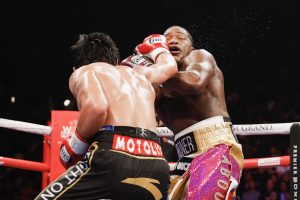 Broner didn’t recall moments like this one after the fight. He thought he won.

“I beat him, everybody out there know I beat him,” a delusional Broner shouted in the ring. “I controlled the fight, he was missing. I hit him clean more times. I beat him.”

Only he didn’t. Far from it. Pacquiao doesn’t possess the same blistering hand speed that carried him to the pinnacle of the sport, but he’s still plenty quick. He was a fireball of energy from the opening bell. He vowed to work Broner’s mid-section and did just that. Forty-seven of his 112 connects were body shots.

Pacquiao overshot his vaunted left hand over the early rounds as he attempted to time his counter-punching foe, who never made the older man pay. Broner sat back in the pocket, retreated, and tried to time Pacquiao with one big shot. Broner actually delivered some effective counter-punching in Round 4 and won the round on two of three cards, but as always, he was reluctant to let his hands go.

A Pacquiao left hand hurt Broner to the body in Round 5 before Broner landed his best combination of the fight, a right uppercut, left hook that snapped Manny’s head. Broner never capitalized though, and lost round after round as Pacquiao unleashed barrage after barrage.

Finally in Round 9, Pacquiao found the shot he was searching for. A ferocious overhand left — the same punch that authored some of the greatest knockouts in recent memory — sent Broner stumbling backward. His back hit the ropes, and Pacquiao pounced. He fired in rapid succession as Broner clung on for dear life, but he was unable to score the knockdown.

Again in the penultimate round, Pacquiao stunned Broner with a left hand. He showed the same ruthless aggression that made him one of the bigger stars in the sport, but the knockout opportunity didn’t materialize. Broner ensured that by staying in a defensive shell.

Pacquiao, the only eight-division champion in boxing history, is a surefire first-ballot hall of famer. He’s one of the best fighters of all time, and even at age 40, he’s still adding to his legacy. This was Pacquiao’s 15th fight at MGM Grand, and now 13,025 fans packed the venue to watch one of the all-time greats. 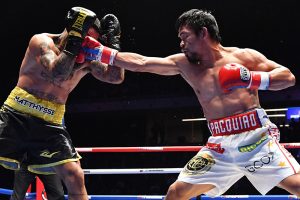 He was saddled with a large tax lien that forced him to compete overseas for his last two outings. His knockout of Lucas Matthysse in July was staged in Kuala Lumpur, Malaysia; it was his first finish inside the distance since November 2009, when he stopped Miguel Cotto in the final round of what’s widely considered the greatest performance of his legendary career.

Now we wait to find out to if Mayweather and Pacquiao will fight again in a rematch of their superfight that shattered revenue records. Mayweather would first need to come out of retirement for the umpteenth time, and while an encore encounter surely wouldn’t match the first bout in terms of business generated, it’s still the most high-profile fight that can be consummated in the sport.

“You keep asking me about Manny Pacquiao, he needs to get past Adrien Broner first,” Mayweather told Showtime’s Jim Gray before Round 6. “And right now I’m living a happy and healthy life.”

If another fight with Mayweather doesn’t materialize, Pacquiao could head to a fight against the winner of the March 16 welterweight title tilt between Errol Spence Jr. and Mikey Garcia. Pacman told The Ring earlier this month that he’s interested in such a matchup, and sources confirmed that PBC officials are keen to put it together.

Pacquiao told The Ring he plans to fight one more time in 2019, a bout in either May or July. His Senate duties in the Philippines, he said, will preclude him from fighting at other junctures in the year.

But when he’s ready to return, we’ll be watching. Even at 40, this version of Pacquiao appears good enough to hang with the best. Whether that includes Mayweather remains to be seen.