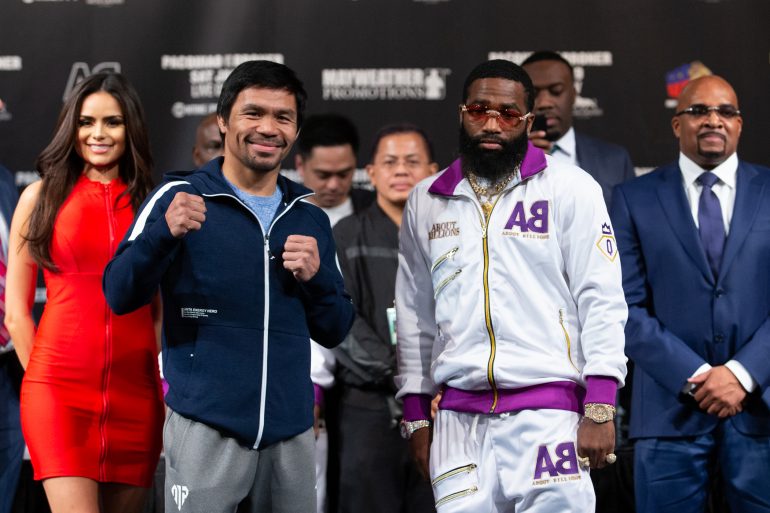 For the greater part of the past 20 years, Pacquiao has rarely been doubted. He’s not just one of the best fighters of his generation; he’s one of the best of all-time, period. Pacquiao is the only fighter ever to claim championships in eight weight classes.

His blistering speed and power followed him to each new division, and at times, he seemed unstoppable. That cloak of invincibility is long gone. After he was defeated by Jeff Horn, hardly an elite-level talent, observers and fans began to write Pacquiao off as washed. Most who viewed the July 2017 fight believed Pacquiao won, but he didn’t resemble the whirling dervish we were treated to watching over the years.

He’s painfully aware of the talk: Can Pacquiao still hang on the elite level? We likely won’t truly find out the answer to that question Saturday when he takes on Adrien Broner at MGM Grand on Showtime Pay-Per-View. After all, Pacquiao is a decided favorite, even if that status is greatly due to Broner’s inability to beat top-level fighters thus far.

But a vintage showing can remind fans what Pacquiao is capable of, and there’s hope. His knockout of Lucas Matthysse in July was his first finish inside the distance since he pulverized Miguel Cotto in 2009 in what’s considered the signature performance of his hall of famer career.

At age 40, Pacquiao has entered uncharted territory: fighting to prove the critics wrong.

“Age is just a number. It doesn’t matter that I’m 40 years old,” Pacquiao (60-7-2, 39 knockouts) said Friday. “I still feel young. Tomorrow I have something to prove – that at the age of 40, I can still give my best. It’s my legacy to give a good fight and to accomplish all this and especially at the age of 40. I have to prove something that Manny Pacquiao is still there.”

Pacquiao, a Senator in the Philippines, appears reinvigorated by his return to the U.S. market, where he starred for years. He’s been downright jovial in all his media dealings (even more so than usual). He appears genuinely excited to be chatting about his ring exploits, and his personality has shined more than ever.

Tax issues forced him to compete outside the U.S. and away from the limelight here. That controversial decision defeat to Horn came in his foe’s homeland, Australia. The win over Matthysse was in Kuala Lumpur, Malaysia. Now, he’s back in Las Vegas, and will fight at MGM Grand Garden Arena for the 15th time. It’s home to many of the greatest nights of his career. He hopes to have at least one more Saturday.

“People writing me off after the Jeff Horn fight was good for me, I’m not mad at anyone who thought that,” said Pacquiao, The Ring’s No. 5 welterweight. “It just became a challenge and a test to me of whether or not I could still show my best.

“The knockout in my last fight felt good. It felt like my younger days against Ricky Hatton, Miguel Cotto and others. That fight was a big challenge for me to recover from the fight against Jeff Horn. People said that my career was done. But I never got discouraged, I just worked hard and made the knockout against Lucas Matthysse happen.”

A second consecutive knockout would go a long way toward convincing the public he’s stillManny Pacquiao. But really, what is there left to prove? His legacy is secure. But he’s a fighter who loves to do what he does best. Once it’s gone, it’s gone, so he’s going to cherish these moments while they’re here.

If nothing else, Broner (33-3-1, 24 KOs) is durable. The 29-year-old was dropped twice in his first-career defeat, a decision loss to Marcos Maidana, but Broner rallied late. Against Shawn Porter, Broner was down wide on the cards and rebounded to score a final-round knockdown, though he still lost. Mikey Garcia routed Broner but never had him in trouble.

“I am not making a prediction but my goal is to knock out Broner,” Pacquiao said. “I am looking for a knockout against Broner. I have to maximize the opportunity. I forgot how much fun winning a fight by knockout was until I stopped Lucas Matthysse last summer.

“It felt great to win that way and the fans loved it too, so why not try for it again? I have nothing personal against Adrien Broner. This fight is strictly business.”

A decisive victory could lead to far bigger business for “Pacman.” Floyd Mayweather will be ringside Saturday, and there’s been growing whispers in the industry that “Money” is scouting his former foe with an eye on a rematch of their revenue-shattering fight from May 2015 that Mayweather won handily.

Even if Floyd doesn’t come out of retirement (again), sources told The Ring that Pacquiao could be matched with the winner of the March 16 welterweight title fight between Errol Spence Jr. and Mikey Garcia.

Both Spence and Mikey would likely be installed as significant favorites over Pacquiao, but those are the kind of marquee showdowns that drive Pacquiao; the kind of fights that made him one of the greats.

It’s another reason why Pacquiao needs to look spectacular, if not knock out Broner altogether. The buzz such a victory would create is immeasurable. Only then would Pacquiao truly be back.

But just having him back in the ring stateside at all is a welcome sight. Even 75% of Pacquiao’s best is good enough to beat most fighters. He’s a treasure, and Pacquiao should be appreciated while he’s here.

Counting out an athlete the stature of Manny Pacquiao is a fool’s errand.