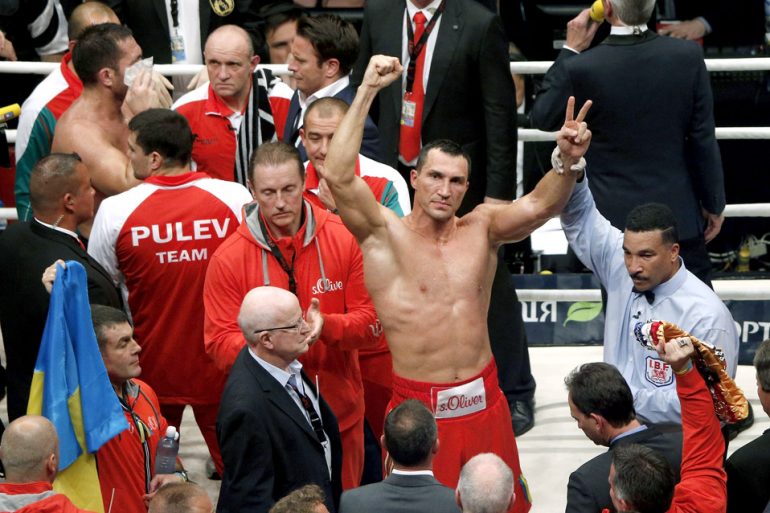 Wladimir Klitschko is considering coming out of retirement.

The former heavyweight champion has held discussions with DAZN on a lucrative three-fight deal, industry sources told The Ring. The deal, if completed, would make Klitschko a global ambassador for DAZN (soccer superstar Cristiano Ronaldo holds that title for the streaming service.)

As part of the package, DAZN would make a significant contribution to UNESCO (United Nations Educational, Scientific and Cultural Organization), a charity both Wladimir and Vitali Klitschko are deeply involved with, per sources.

Wladimir has discussed the deal directly with Len Blavatnik, the majority shareholder of DAZN Group who is worth an estimated $16.3 billion. Like Klitschko, Blavatnik was born in Ukraine.

Klitschko, who turns 43 in March, is interested in an initial comeback fight against limited opposition, according to sources. One of the fights of the proposed deal would take place in Germany, where Klitschko resided and starred for years.

The second fight discussed: a rematch with Tyson Fury. The Brit upset Klitschko via decision in November 2015. A return bout was set for 2016, but it was twice cancelled as Fury battled depression and substance abuse.

The third fight of the proposed deal: another rematch, this one against Anthony Joshua. Joshua was dropped in Round 6, but rallied to knock out Klitschko in Round 11 of a modern-day heavyweight classic.

Klitschko (64-5, 53 knockouts) hasn’t competed since that April 2017 bout. The Ukrainian was in talks to fight Joshua again, but ultimately opted for retirement over another lucrative payday. Klitschko’s older brother, fellow ex-heavyweight champ Vitali Klitschko, once ended his own retirement.

Rumors circulated last week that the Wladimir Klitschko was considering a fight with heavyweight contender Dillian Whyte. He told Sports Illustrated the reports were “fake news.” Klitschko, in fact, is not in talks to fight Whyte, per sources.

Klitschko reigned over the heavyweight division for over 10 years. The Olympic gold medalist was often panned for his dull fights, but that was partially due to Klitschko’s greatness. It was also owed to his safety-first style honed under hall of famer trainer Emanuel Steward.

Klitschko, too, is headed for the hall of fame. He’s the best heavyweight of his generation, and of the most dominant big men in boxing history, period. His excellent jab and powerful right hand produced many spectacular knockouts. The fight with Joshua, the final of his Klitschko’s career, earned fight of the year honors from both The Ring and the Boxing Writers’ Association of America.

Klitschko remains one of the most recognizable names in boxing. His return would represent a much-needed injection of life into a suddenly reinvigorated heavyweight division short on star power.