Canelo Alvarez to defend Ring middleweight championship vs. Daniel Jacobs on May 4 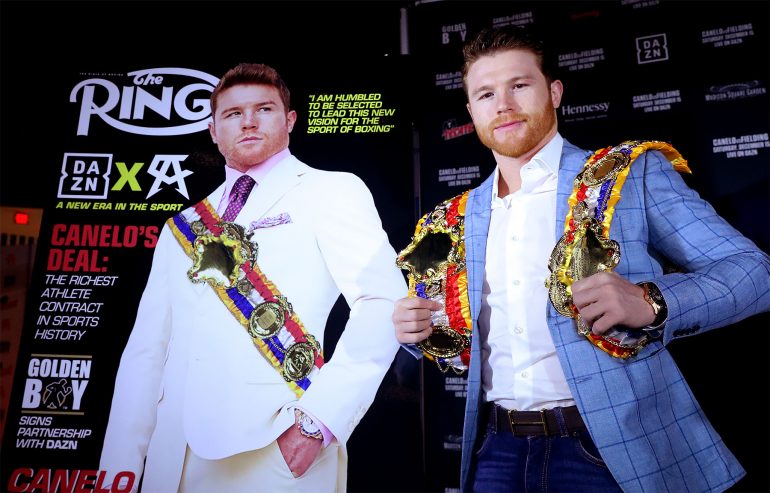 Canelo Alvarez is ready for another great challenge.

The Mexican star will defend his Ring middleweight championship against Daniel Jacobs on May 4 at T-Mobile Arena in Las Vegas, Golden Boy Promotions announced Thursday. The fight is the first truly marquee bout on fledging streaming platform DAZN.

Alvarez (51-1-2, 35 knockouts) defeated Gennady Golovkin in the rematch in September to claim the Ring’s championship at 160 pounds, along with two sanctioning body belts. He stayed busy in December with a third-round stoppage of Rocky Fielding at super middleweight, but the plan always called for Canelo to return to 160 pounds and continue his reign.

“I have no doubt that I will be victorious,” Alvarez said, “and that I’ll be one step away from becoming the undisputed middleweight world champion.”

Jacobs (35-2, 29 KOs) holds a middleweight title, so a defeat over him would bring Canelo one belt closer to his goal (Demetrius Andrade holds the other belt.) Andrade also fights exclusively on DAZN, as does Jacobs. The 31-year-old Brooklynite was a promotional and network free agent, but he signed a new three-fight deal with promoter Eddie Hearn that will ensure his next two fights after May 4 are also on DAZN, according to a source.

Jacobs outpointed Sergey Derevyanchenko in October to win a vacant belt. Now, Jacobs is ready to return to the limelight. He proved in a March 2017 HBO Pay-Per-View fight against Gennady Golovkin that he could not only hang on the elite level, but thrive. Jacobs survived a fourth-round knockdown in that bout, and many ringside observers believed he deserved the decision victory.

More than two years later, Jacobs will have another change to prove he’s one of the best pound-for-pound fighters in the world.

“This is the opportunity I have been waiting for. The opportunity to achieve greatness inside the ring,” said Jacobs, The Ring’s No. 2 middleweight. “I have always believed I can beat Canelo, and on May 4 live on DAZN, I will get my chance to play it out.

“It’s been nearly four years since Canelo has faced an American challenger. It’s going to be a huge event where I believe I will cement myself as the best middleweight in the division.”

For now, that distinction belongs to Alvarez, The Ring’s No. 3 pound-for-pound fighter. His last bout against an American came in May 2015, when he scored a spectacular knockout of James Kirkland. His lone defeat came to an American, too: Floyd Mayweather.

Since that setback, Alvarez, 28, has established himself as the biggest star in boxing. He ascended to the throne of pay-per-view king with two big-money fights on HBO’s service against GGG. Canelo’s PPV fights with Liam Smith and Julio Cesar Chavez Jr. were also commercial successes.

With HBO ceasing boxing coverage, Alvarez was free to make moves. Golden Boy Promotions moved quickly to align Alvarez with DAZN on a 10-fight, $350 million deal to make him the face of the platform. His bout with Fielding was a one-off, so the first bout of his new deal begins in May against Jacobs.