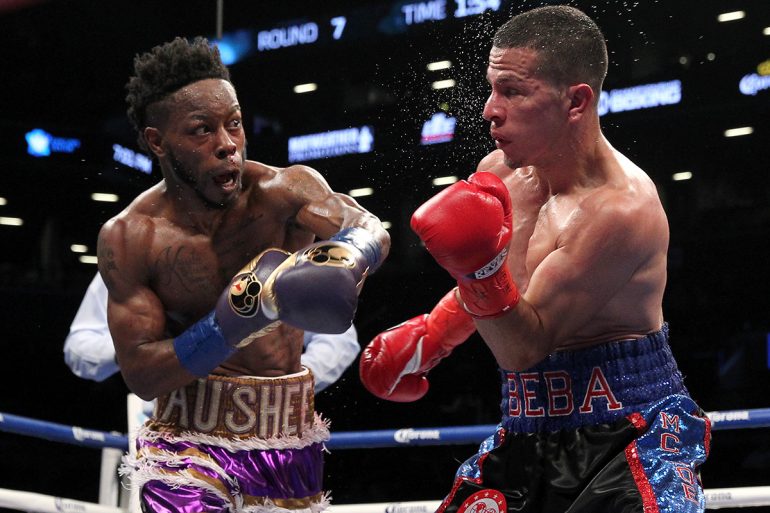 Americans are not, as a collection, an assembly of the best and brightest minds, free from biases, with baseline POVs freed from shackles of ignorance and inertia.

So, we wonder, could bias and the other traits mentioned factor into the lack of love for lower weight fighters among boxing fans?

What are the reasons why a Rau’shee Warren doesn’t get the same love and attention and buzz and bucks as 147s, 160s and heavies?

That is probably a question for another day, another article…

Warren, a Cincinnati native who holds a 16-2 record (4 knockouts), is 31 years old. He chatted with RING after a workout at the Headbangerz Gym, in Washington D.C. He works out with and is overseen by Barry Hunter.

We talked about his Jan. 19 scrap, on the Adrien Broner versus Manny Pacquiao undercard, from Las Vegas. The three time US Olympian, who went to his first games as a 106 pounder, will meet Nordine Oubaali (14-0, 11 KOs), a fellow lefty, who flies in from France.

So, right off the bat, does Warren get irked that not as much attention is paid to his fight, which will offer the winner the vacant WBC bantamweight title, as some other scraps of lesser import?

“I don’t really get frustrated with that,” he told me. “I’m a three time Olympian and I’m fighting for a WBC title. There’s been nobody to push me like there is now.”

Warren has been on a bit of a rollercoaster, with wins and losses. He lost to Juan Carlos Payano for the WBA crown in 2015…

..then avenged the defeat in his next outing, in June 2016. He dropped the title to Zhanat Zhakiyanov in Feb. 2017 and has won two straight decisions, over McJoe Arroyo (July 2017) and then Juan Gabriel Medina last April.

He thinks a win on the 19th will lift him higher, get him more fan and media attention. “What’s different this time is, when I win a belt, people will know my great resume and also, the team this time around me. I’m about the only American in this weight at the top of that class, and this second time as world champ I’m going to bring it to the fans.”

As to that “team” …he’s known Hunter since he was ten years old. “I liked how he was with his team,” Warren shared. At tourneys, he’d gravitate to the Hunter crew, because he liked their vibe. Around 2013 or so, he’d start to go to DC and train with Hunter. “Broner used to go there,” he recalled. He knew that his coach Mike Stafford would be cool with sharing, and working side by side with Hunter.

“With Barry there are no games, that’s what I like,  being challenged in the ring and outside it. I feel like I can push my career farther here.”

We then touched on some of those recent bouts…

“The first loss I felt like I won, versus Payano, the Dominican, in Florida. It was a real close fight, and then we were fighting him again. I wanted to fight nobody but him.”

Then against Zhakiyanov, “Ricky Hatton trained him, I dropped him twice in round one, it was a rugged fight, I felt like I won that fight, felt he didn’t do enough. So my only two losses were in title fights.”

Looking forward, Warren tells us that we will see him using the jab more, and it emerging as a real weapon for him against Oubaali. This is a rematch of sorts; they met in the 2012 Olympics, and Warren lost by a single point, 19-18. “I was winning that fight, and now I know what I could have been doing to make it a lot easier.”

On that note, we can presume this time Warren won’t come to the ring wearing contact lenses, so he won’t be put off, like when the lenses popped out and he had to let Oubaali come closer so he could see him. “That threw me off, I didn’t tell nobody. I have no contacts, my eyes are better.

“What else is better? I’m better than I was. I have a nice jab now, and this is 12 rounds, it’s not about three rounds of jumping around. Now, one shot can change a fight. I’ve dreamt about fighting someone I fought in the amateurs. It’s going to be a great fight. And will I get a KO? Yes, I have been trying to sit down and pick my shots. I don’t really go for the KO, though.”

Warren also thinks his seasoning will help propel him past the Frenchman. “He’s fought nobody like me, he’s not been in a real title fight, 12 rounds like me and Payano did. This time it’s a way different outlook, and I expect my greatness to come out. I don’t really predict how it will go but I see the outcome as me being victorious. And if I see the chance to take him out, I will put my foot on the gas. We throw a lot of punches at bantamweight and people will start respecting these lower weight classes. And we are putting our life on the line, like everyone else in all the weight classes.

“I don’t know, sometimes fans are just looking for KOs, and don’t see the skills in the smaller weight classes. But there are lot of great fights down here! And I will bring some noise down here!”