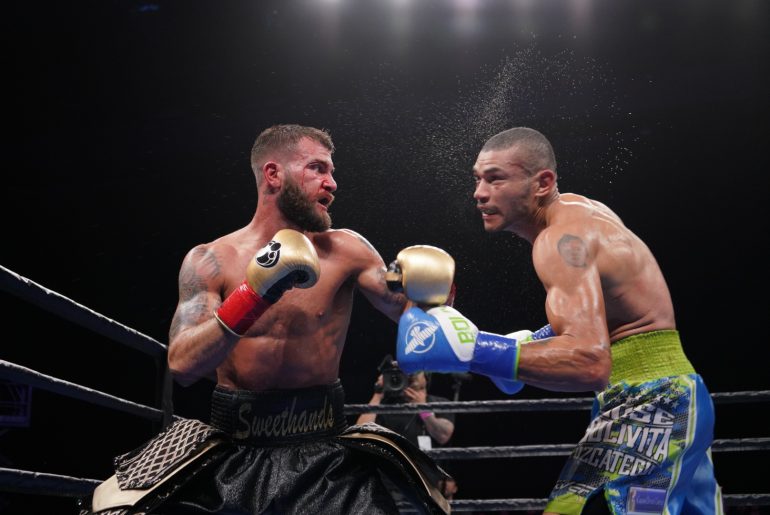 LOS ANGELES — Caleb Plant said he never wanted anything else in life. He never aspired to be a firefighter; nor a cop.

He only wanted to be a championship fighter. It’s all he thought about during those hard days growing up in the trailer park in Ashland City, Tennessee.

Finally, his dream is realized.

Plant lifted the IBF super middleweight title from Jose Uzcategui on Sunday at Microsoft Theater in an action-packed main event of PBC on FS1. Plant scored knockdowns in Rounds 2 and 4 en route to a unanimous decision via scores of 116-110, 115-111 and 116-110. The Ring scored it 115-111.

“I’ve worked my whole entire life for this,” said Plant, who proposed to his girlfriend, Jordan Hardy, in the locker-room following the victory. Hardy, a reporter who works for PBC and FS1, said yes. “Boxing seventeen hard years. I buried my daughter in the process of trying to get this belt. I promised I would bring her this title and that is what I am going to do.”

The 26-year-old was more than up for the challenge. He boxed beautifully from the onset, utilizing his impressive jab in a variety of ways. He doubled up on it; even dispensed with it four times in succession at times. He jabbed Uzcategui’s midsection often to disrupt the hard-charging fighter’s rhythm. Plant even showed off an up-jab.

The Las Vegas-based fighter won the first five rounds unanimously; coupled with the two knockdowns, Uzcategui was forced to rally down wide on the scorecards. He had trouble timing Plant with his wide, looping shots. And each time he missed, Plant made him pay.

Plant (18-0, 10 knockouts) wasn’t regarded as a puncher; it was Uzcategui who scored KOs in 23 of his 28 victories. And it was he who knocked out Andre Dirrell last year to win the title. But Plant’s sharp, counter-punching deposited Uzcategui on the canvas twice.

First in Round 2 on a left hook, and then again in Round 4 after Uzcategui landed a left to the body, before throwing an overhand right to the head that never met its mark. Instead, Plant’s counter left hook found its target first, and the punch sent Uzcategui flying backward.

“I knew I caught him clean during those knockdowns, but I knew he wasn’t all the way out so I took my time,” said Plant, who hadn’t scored a knockdown in his last three bouts against much easier competition. “I stayed relaxed, I stuck to the game plan and got it done just like I said I would.

“This is overwhelming. I am a kid who came from nothing. I believed in myself and now I’ve been crowned king.”

Slowly but surely, the Venezuela native worked his way into the fight with measured pressure. Plant’s left eye began to spool blood in Round 4. By the 10th round, it was a busted nose he was forced to contend with.

Plant laid on the ropes most rounds and countered off them, utilizing lateral movement that troubled the slow-footed 28-year-old. The strategy began to work against him as Uzcategui’s punches connected with increasing frequency.

Uzcategui (28-3, 23 KOs) landed a flurry of shots in Round 9 that sent Plant spiraling around the ring. Uzcategui blasted a wobbly Planted with a plethora of heavy shots, but somehow, the challenger never hit the canvas.

“I did feel that I had the advantage heading into the fight,” said Uzcategui. “I went down because I was off balance, but I wasn’t hurt. He started to get tired around the sixth round, which was the plan. Caleb knew how to clinch and hold. He was smart. He knew how to stay away from the punches.

“I expected more movement and more boxing out of him. I would love the rematch. I think everyone saw a great fight tonight. I gave him the chance at the title and I would hope he would give me the chance to win it back.”

Plant could meet the winner of the February 23 bout between James DeGale and Chris Eubank Jr., according to sources. But a rematch makes sense, too, especially considering Uzcategui’s success down the stretch.

For now, Plant is going to enjoy the greatest night of his life, both in and out of the ring. All he ever wanted is now his.