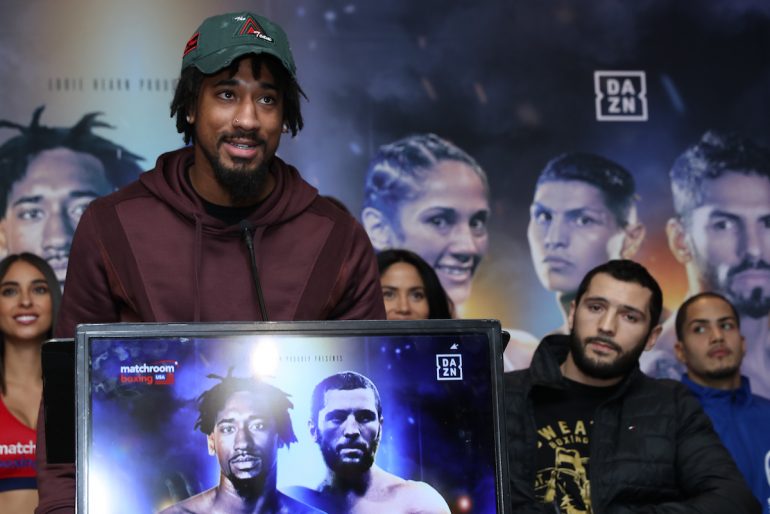 This was finally it for Demetrius Andrade.

A chance to prove that he wasn’t just some talented guy; that he could put it all together against a top-flight opponent. All the inactivity; all the wasted years would be forgotten.

Then, weeks before Andrade’s career-defining fight, Billy Joe Saunders tested positive for the banned substance oxilofrine, and the Brit was denied a license as a result. He was subsequently stripped of his middleweight title. Andrade ended up fighting late-replacement Walter Kautondowka, a fighter unknown in the U.S.

Andrade (26-0, 16 knockouts) won the fight handily, and become a two-division titleholder in the process. The chance to prove himself against the best, though, was gone. Now, Andrade is preparing for his first title defense, a Friday bout at New York’s Hulu Theater at MSG against Artur Akavov.

Even if Akavov is a non-descript opponent, Friday’s matchup is a step forward for the 2008 Olympian. “Boo Boo” has competed just six times in the past five years. The athletic southpaw’s fight vs. Akavov will be his second in three months. Just as importantly, Andrade will finally be headlining a notable card, one streamed by DAZN. And just maybe, if all goes according to plan, Andrade will secure that signature fight that’s long eluded him later this year.

“They can no longer say ‘he’s not active, there’s no money, he’s not active, there’s no money,'” Andrade, 30, repeated to belabor the point during an interview with The Ring last week. “Those excuses (from potential opponents) can no longer be said anymore because DAZN and Matchroom is willing to pay whatever if it’s worth it. … If I wasn’t as good as I am, Canelo (Alvarez), GGG, they would have came in and I would be just another guy on the record.

“It’s like, how is everyone else getting fights but me? Me fighting in three, four months is new to people. It’s important for me to stay active, and for the people to see me more. I think that’s what’s going to make the biggest difference.

Andrade, The Ring’s No. 5 middleweight, is confident the increased visibility will lead fans to start demanding fights between him and the likes of Canelo and Gennady Golovkin. The 30-year-old also is open to giving Saunders the chance to regain his title, though he has his doubts the fight will ever happen.

“He can’t make weight no more. Didn’t he just fight at 175 pounds?” Andrade asked. Saunders, in fact, weighed over 178 for his stay-busy victory last month, a fourth-round TKO over journeyman Charles Adamu. “Clearly he needs the oxilofrine that he was on to make weight.

“I’m thinking about whoever I can get in the ring who makes sense (as an opponent). He’s a guy who doesnt’ know which weight class he fights at. … Will I still fight him? Yeah, but he’ll have to wait his turn. I’m not going to reward him after all the damage he did.

“To do what he just did shows you can’t count on him. He’s not reliable. You don’t know if he’s going to show or not.”

Akavov, a native of Russia fighting out of Beverly Hills, California, already challenge for a middleweight title once, and that bout came against none other than Saunders. Akavov (19-2, 8 KOs) surprised by giving the tricky southpaw plenty of issues en route to a narrow-points defeat.

“That’s why we picked him, a guy that went 12 rounds with (Saunders),” said Andrade, who trained for this bout in Boca Raton, Florida. “Some of the excuses I hear shows the kind of professional he is. ‘I was out of shape.’ How you getting out of shape when you’re about to fight? How do you fight drunk?

“Akavov was a tough fight for him, be real about it, don’t make excuses.”

Andrade’s talent has long been apparent. Perhaps, at long last, it will be fully realized. The only way to truly know how good Andrade can is to see him matched up with an equally gifted foe.

“It’s about time that people start seeing me as the headliner,” he said. “I’m the baddest motherfu—- out there.”