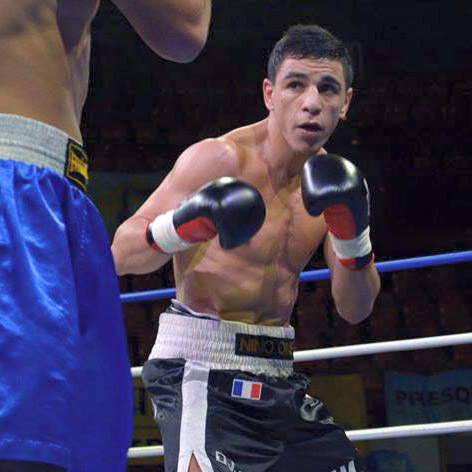 Nordine Oubaali has had a rough year for a fighter who is still undefeated.

The French national, who has seventeen siblings, has been the WBC no. 1 ranked contender, and was set to fight for their vacant bantamweight title back in June of last summer against Petch Chitpattana. The fight was made to take place in Paris but eventually was scrapped due to funding issues with the French network.

Petch’s team tried to reschedule the bout and called on the WBC to settle the situation. In the meantime Nordine (14-0, 11 knockouts) signed with MTK management, and rumors began to swirl that Petch, the no. 2 ranked

fighter for the WBC at the time, would not be Nordine’s next opponent. To make matters worse, the WBC ordered Takuma Inoue and Mark John Yap to fight for a mandatory position, while Petch took a stay busy fight, and Nordine remained idle.

Finally, some light at the end of the tunnel seemed imminent with Nordine and his team agreeing to terms with Rau’shee Warren (16-2, 4 KOs) while the WBC approved the bout for the title and scheduled it for December.

Again, a delay, and it was rescheduled to the Pacquiao-Broner undercard set for next Saturday at the MGM Grand in Las Vegas.

It will be a rematch of sorts as the two duked it out in the 2012 London Games with Oubaali edging the decision over Warren, who is now the more experienced professional.

The Ring: You only fought once in 2018. How anxious or excited are you to get back in the ring?

Nordine Oubaali: Yes correct, I only fought once in 2018 but it doesn’t affect me as it is part of the business that sometimes you have to wait for your opportunities. I’m very excited to come back to the ring and I will take this opportunity to show the world who I am.

TR: You have impressively knocked out your last five opponents and eleven of 14 overall. Do you carry more power at bantamweight than most other fighters in the division? Why or why not?

NO: Yes I do believe that I am the strongest puncher in the division and my record proves that.

TR: Do you plan to KO Warren?

NO: I plan to win the fight first of all. I am never really thinking about the KO as it just comes naturally. My main mission is to win and put on a master class of boxing.

TR: The process with the WBC has been long. Please tell me about the frustration you’ve had just waiting for your chance.

NO: I don’t know why the fight was postponed again and again and of course you are not happy if you are constantly waiting for the fight. But finally the day has come and all this waiting time has rather made me even more hungry to win that belt.

TR: You were originally supposed to fight Petch Chitpattana. He was easily handled by Takuma Inoue. Did you watch the fight or have any comment on the result?

NO: Inoue may one of my future opponents but right now my focus is really on Rau’shee Warren.

TR: You’re fighting in Las Vegas on a major card featuring Manny Pacquiao and Adrien Broner – two of the biggest names in the sport. What does this mean to you and your career and did you expect that after all the difficulties making the WBC fight that it would turn out this fortunate for you?

NO: I’m very honored to fight on the same event with a great fighter like Manny Pacquiao. He is a true idol to many so I am motivated to prove that I belong on that event but to tell you the truth I would even fight Rau’shee Warren in a basement somewhere. I really want to get that belt and all my focus is on that and not on the glamour around it.

TR: What is your impression of Warren?

NO: Warren is definitively a good fighter with good skills but I know I am better than him.

TR: Do you have a final message for him?

NO: I hope you will be ready because I will wait for you and I will show the world that I’m the number one in this division.