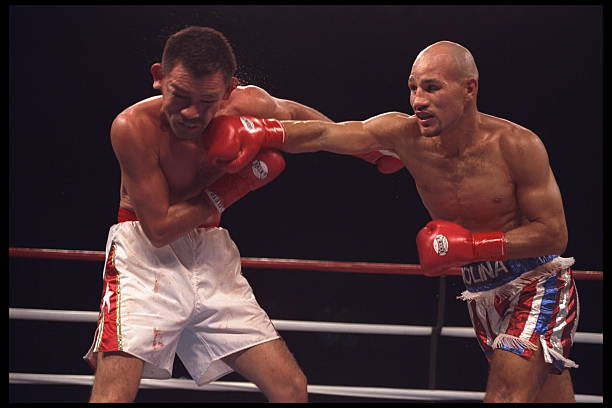 Molina was born in the seaside town of Fajardo in the east of Puerto Rico, on March 17, 1965. He came from a big family of seven sisters and four brothers.

Molina’s mother was initially opposed to him boxing; however his older brother Jose convinced her of his abilities. Jose won gold at the 1979 Pan American Games at 156 pounds. It lit a fire beneath Molina, who began his own career at just 14 years of age.

“I saw how well (Jose) was treated by everyone, so I decided I wanted to be like him,” Molina told RingTV.com through Fernando Gaztambide. He was my idol and my inspiration.”

Molina’s mother was a nurse and an accident prevented her from working. The disability check she received wasn’t enough to meet the family’s needs.

“One day when I got home after school, I found my mother crying,” Molina said. “She told me that we lost our house and had to move back to government housing. Right there I promised my mother that someday I will buy her a house.”

Molina flourished as an amateur, winning gold at the World Junior Championships in 1983 and at the Gold Cup in 1985. He also represented his country at the 1982 World Championships and 1984 Olympics in Los Angeles before exiting the unpaid ranks with a record of 103-11 (45 knockouts).

Molina’s services were courted by the Duva family, who paid him $100,000 to sign with Main Events. He made his professional debut in February 1986.

“It was a good learning experience working for Lou Duva,” he said. “Being part of a team of such amazing boxers was great.”

Early in his professional career Molina fought mostly on the Eastern Seaboard. He won all 12 fights in his first year, including one on the undercard of Evander Holyfield vs. Dwight Muhammad Qawi.

In his 15th bout, Molina traveled to his more experienced opponent Lupe Suarez’s hometown of Corpus Christi, Texas, and tasted defeat for the first time when he was stopped in the ninth round.

After returning to his winning ways, Molina was rewarded with his first title opportunity. He headed to Sacramento, California, to challenge IBF 130-pound titlist Tony Lopez in his backyard. He gave the champion all he could handle, ultimately dropping a hard-fought unanimous decision by one point on two of the official scorecards.

In his following outing, in April 1989, Molina won the inaugural WBO junior lightweight title, outboxing fellow islander Juan Laporte. Looking back, he claims it was the proudest moment of his career.

“When I won the WBO title over Juan Laporte,” he said,” he was 29; I was 24. The critics were seeing a 50/50 fight. The WBO was born in Puerto Rico, so It was a very proud moment that I will never forget. The fight was held at the legendary Roberto Clemente Coliseum in San Juan.”

The bout also allowed Molina to make good on a promise he had made 10 years prior.

“I worked very hard to make possible my dream of buying mom a house,” he said. “Finally my dream came true and, after winning my first world title, I bought my mother her house. Dreams do come true. It’s a matter of working hard to fulfill our dreams.”

Molina vacated the then-lightly-regarded title and secured a rematch with Lopez, again in Sacramento. This time the skilled Puerto Rican piled up the points and closed the show in the 10th round to win the IBF title.

In his first defense, he gained revenge over another former opponent, stopping Suarez in six rounds before heading to a rubbermatch with Lopez on neutral turf. This time Lopez edged matters by hard-fought split decision.

Molina won five fights over the course of the next two years to keep himself in the title picture. After Brian Mitchell beat Lopez and retired, the IBF title became vacant.

Promoter Cedric Kushner brought the classy Puerto Rican to South Africa to face Jackie Gunguluza in February 1992. Gunguluza proved no match for Molina, who dropped his opponent three times in the fourth to regain his old belt.

In December 1993, heavy metal band Pantera came to Puerto Rico for its “Vulgar Display of Power” tour. Lead singer Phil Anselmo was a big boxing fan and eager to meet Molina. However Molina wasn’t familiar with the group.

When the band arrived on the Island, Anselmo was in a very bad mood but when Molina came to his dressing room, the singer was extremely pleased to greet his visitor. Later Molina went to watch the band perform.

“I was thinking it was a soft rock or country music concert,” he said laughing. “I was with my wife very relaxing and then, BOOM, the music hits and the mosh pit was very wild. I was scared because we thought that the public were fighting, so I was thinking of leaving but the producer told us to stay, that everything was fine (laughs).

However the big-money paydays eluded him and Molina decided to vacate his title and step up to lightweight to face burgeoning star Oscar De La Hoya. It proved a bridge to far and the new face of boxing won a unanimous decision.

Over the next three years, Molina reeled off nine wins to earn a shot at IBF lightweight kingpin Shane Mosley. The Los Angeles native proved too much and stopped Molina in eight rounds. 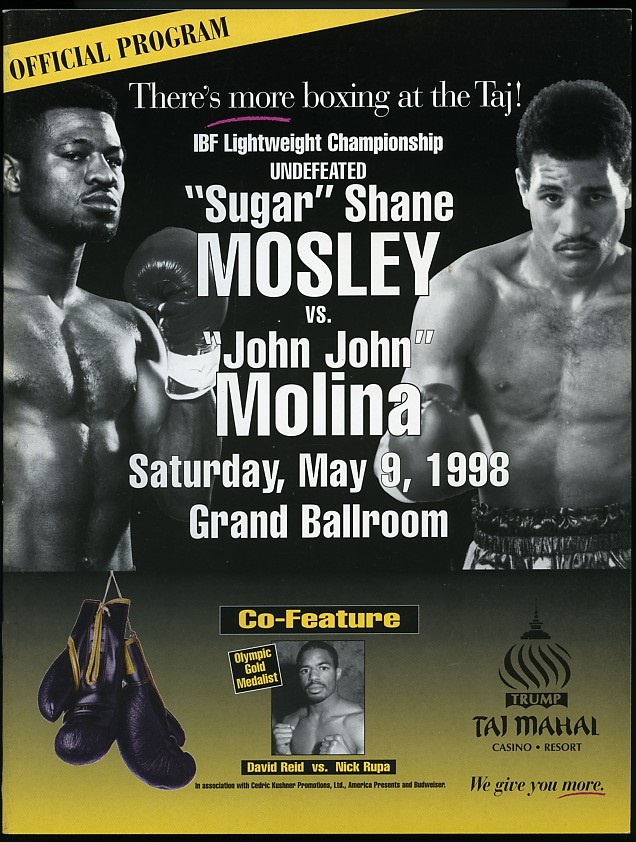 Molina returned eight months later and was offered a world title shot at 130 pounds against IBF ruler Robert Garcia on the undercard of Mike Tyson-Frans Botha, in January 1999. It wasn’t known at the time but Molina had appendicitis surgery one month and 20 days before the fight. He gave a sterling effort but lost a close, unanimous decision.

He closed out his career with seven wins, over solid opposition before losing to Juan Lazcano in 2001. Molina retired after a 15-year professional career, with a record of (52-7, 33 knockouts).

Looking back there were a couple of fighters with whom Molina would have liked to have shared a ring.

“Azumah Nelson, a true gentleman,” he said. “I fought in Indio, California, (in December 1995, on the same card as Nelson-Gabe Ruelas). He came to my dressing room, very happy with my performance. He told me I was the best and I quickly replied to him that he is the best (laughs). I would also have liked to fight Brian Mitchell.”

Molina, now 53, still lives in Fajardo, is divorced and has three children. After boxing he worked a day job at a telephone company but has since retired. He stays active and regularly takes part in WBO charity events on the island, as well as helping in his local community. There is currently a movement for a statue of Molina to be erected in his hometown.

Although not directly involved in boxing anymore, Molina supports the new generation of Fajardo fighters including Subriel Matias, McJoe and McWilliams Arroyo and Alfredo Santiago.

Molina graciously took time to speak to RingTV.com about the best he fought in 10 key categories.

BEST JAB
OSCAR DE LA HOYA: I was impressed with his jab and quickness, at that time, but still I put on a great performance.

BEST DEFENSE
MANUEL MEDINA: Mosley, Oscar and “Mantecas” Medina. Medina was very very hard to hit. I was throwing all types of punches and he has dodging them very good. He was not as fast as the others but accurate, intelligent, wise. Adapting to the rhythm, (I was) really impressed with him. 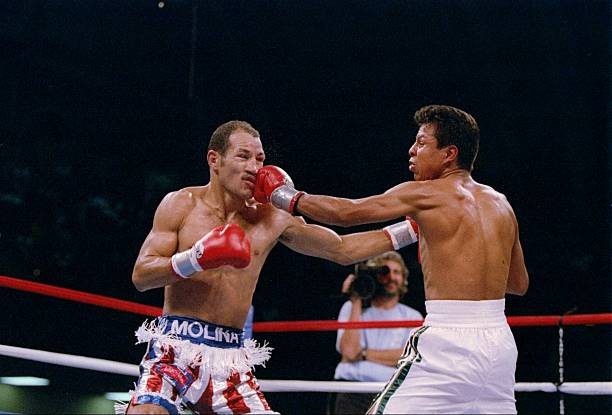 FASTEST HANDS
SHANE MOSLEY: I learnt that Mosley was a complete fighter and his hand speed was phenomenal, on another level.

BEST FOOTWORK
MOSLEY: Wilson Rodriguez and Mosley are the ones I can remember. No matter how hard you train, someone may be faster than you, so you need to use other attributes you have and perfect timing is key. I’d say Mosley.

BEST CHIN
JUAN LAPORTE: Oh my God; I hit him very hard and he was OK. Also in his previous fights, you can see that he has a iron chin.

SMARTEST
DE LA HOYA: Mosley and De La Hoya had great speed and combinations. They always look for your weakness. Smart – to choose one, I choose De La Hoya.

STRONGEST
LAPORTE: Juan Laporte by far. You just cannot blink an eye when facing him. Laporte was like a tractor, always coming forward, no matter what, and throwing hard punches all the time. In our fight, I decided to attack but to do so, (you have to be) smart in the first half to gain respect, to surprise him, moving in and out. The other half of the fight, my team told me to box more, to move to the left, and that’s what I did. He connected with a couple shots but I just kept moving and using the ring to my advantage.

BEST PUNCHER
EMANUEL AUGUSTUS: Emanuel Augustus hit me very hard but he didn’t notice (laughs). I was poker-faced when that happened. It was a body shot. Thank God I didn’t scream because if he noticed that and started a rally, I may be in trouble but my condition was great. I was physically and mentally ready so I just kept fighting.

BEST OVERALL
MOSLEY: Mosley knew very well my style and has lots of tools in the pocket and didn’t mind going to war.