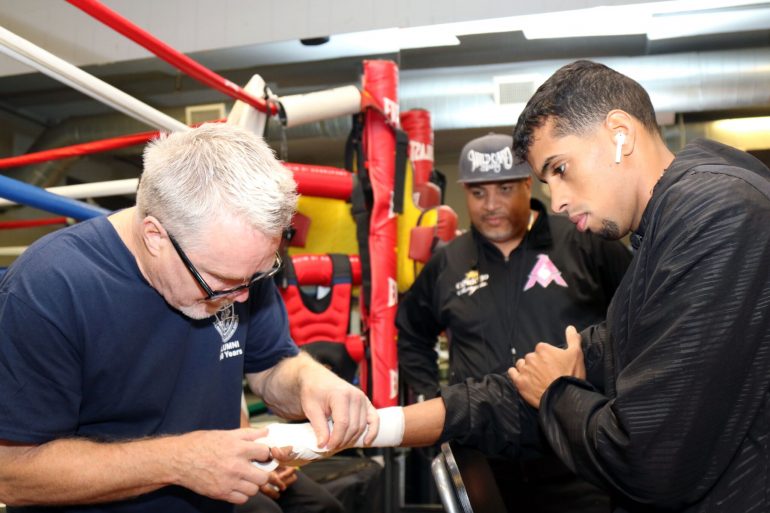 Alberto Machado will defend his WBA “regular” junior lightweight title against Andrew Cancio in the main event of a Golden Boy Promotions card on Feb. 9, it was announced Friday morning.

Both 12-round scheduled fights will take place at the Fantasy Springs Resort Casino in Indio, California.

Also on the card, featherweight contender Joseph “JoJo” Diaz will face Charles Huerta in a 10-round bout.

All three bouts, along with preliminary action, will be streamed live on DAZN.

Machado (21-0, 17 knockouts) is coming off an impressive first round knockout win over Yuandale Evans on Oct. 27 in New York City. The 28-year-old southpaw made the first defense of his WBA title on July 21, winning a one-sided decision over Rafael Mensah in Las Vegas.

Machado, who is co-promoted by Golden Boy and Miguel Cotto Promotions, is ranked No. 4 by The Ring at 130 pounds. He is trained by Freddie Roach and resides in San Juan, Puerto Rico.

“Cancio is a great warrior with good experience and will come very hungry,” said Machado, in the Golden Boy press release.

“A victory over him will take me further to what I want to achieve in this sport. This is the third defense of my title, and now I am going in with more experience.”

The 30-year-old Cancio (19-4-2, 14 KOs) has had a resurgence in his career, winning four of his last five bouts, with the only blemish being a knockout loss to Diaz in September of 2016.

In his last bout on Aug. 17, Cancio won a 10-round unanimous decision over Dardan Zenunaj.

Cancio will likely have a partisan crowd in his favor as he grew up in Blythe, which is about an hour and a half drive away. He now lives in Oxnard, Calif. and trains in nearby Ventura.

“I’m very excited and grateful for this opportunity to fight for a world title,” said Cancio, who is ranked number 10 by the WBA. “I’ve watched many of Alberto Machado’s fights and know how great of a fighter he is. However, I’ve already started training and will be well-prepared on Feb. 9 to win the world title in front of my fans.”

Vargas (32-0, 22 KOs) will be making the fourth defense of his WBC title. The 28-year-old Vargas had to recover from cuts suffered over both eye in his bout on May 12, a 12-round unanimous decision over Azat Hovhannisyan.

Vargas, who is trained by Ignacio “Nacho” Beristain, is ranked No. 2 as a junior featherweight by The Ring.

As in most of his fights, he will have a significant height advantage as he stands almost 5’8” tall.

“Franklin Manzanilla is a complete fighter,” said Vargas, who resides in the Mexico City area. “He’s tough and goes forward, but he also knows how to box. He’s a strong fighter, and he showed that by defeating Julio Ceja in four rounds to earn the right to fight for a world title.”

Manzanilla (18-4, 17 KOs) pulled off the upset win over Ceja on May 26 and has not fought since then. The Caracas, Venezuela resident has won eight of his last nine bouts to earn a number six ranking by the WBC.

The clash between Diaz and Huerta will also pit two fighters that resides in the Los Angeles area. The southpaw Diaz grew up in South El Monte, while Huerta resides in nearby Paramount.

Diaz (27-1, 14 KOs) defeated Jesus Rojas by unanimous decision in his last bout on Aug. 11. Diaz was not able to win the WBA secondary featherweight title as he weighed above the 126-pound limit.

Aside from being ranked in the top 10 by two of boxing’s sanctioning bodies, Diaz is ranked No. 7 by The Ring.

Huerta (20-5, 12 KOs) won a hard-fought eight round technical decision over Miguel Angel Gonzalez on Aug. 10. He has won his last two bouts after losing his previous two.

“The best talent from these two countries, which have a rich history in the sport of boxing, will be on display for fans to watch at Fantasy Springs Resort Casino or from home on DAZN.”

Francisco A. Salazar has written for RingTV.com since October of 2013 and has covered boxing in Southern California and abroad since 2000. Francisco also covers boxing for the Ventura County (Calif.) Star newspaper, Boxingscene.com, and FightNights.com. He can be reached by email at [email protected] or on Twitter at @FSalazarBoxing.