Shakur Stevenson: ‘I am ready to fight the best featherweights in the world’ 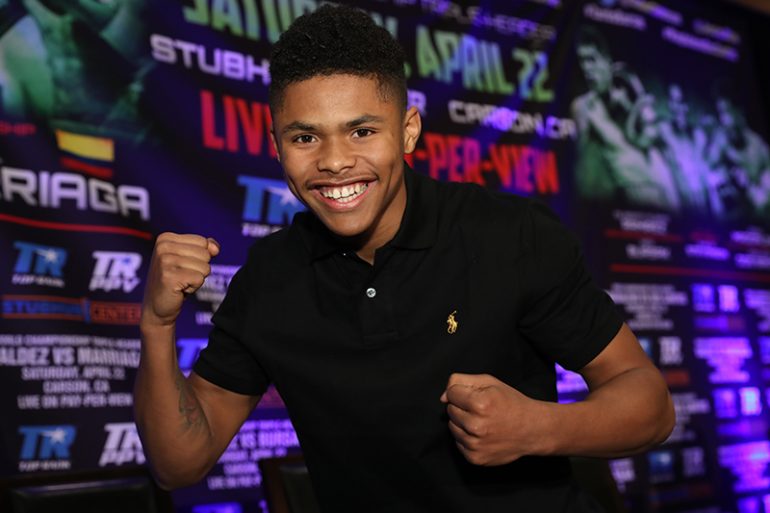 Shakur Stevenson believes he is ready for the top fighters at 126 pounds, and if the unbeaten featherweight prospect can continue to put forth stellar performances, that opportunity could arrive this year.

Stevenson will square off against fringe-contender Jessie Cris Rosales on Jan. 18. The 10-round bout will take place at the Turning Stone Resort and Casino in Verona, New York.

On Oct. 13, Stevenson (9-0, 5 knockouts) scored an impressive knockout victory over Viorel Simion in Omaha, Nebraska. The quick-fisted southpaw scored three knockdowns before the fight was stopped at the end of the opening round.

Stevenson, who was born and raised in Newark, New Jersey, has been more aggressive of late and is sitting down more on his punches. He has stopped three of his last four opponents.

The manner in which the former amateur standout has decimated recent opposition has impressed his brain trust at Top Rank which signed him to a promotional deal after Stevenson took silver at the 2016 Olympic Games.

“(Shakur) is a legit 10-round fighter now,” Top Rank Vice President of Operations Carl Moretti told The Ring Thursday evening. “He’s a top contender as well. He gets stronger after each and every camp and fight.”

As far as progress, Moretti believes Stevenson, who currently holds a No. 11 ranking with the IBF, could become a contender quicker than many boxing experts might expect.

“We see his progress continuing throughout the year, with his activity level putting him in a position for a world title sooner rather than later.”

For that to happen, Stevenson must put on an impressive performance against Rosales.

“I am ready to fight the best featherweights in the world,” said Stevenson. “2019 is going to be a year to remember for me. Rosales is a tough opponent, but he’s going to be no match for my speed and power.”

Rosales (22-1, 10 KOs) resides in Cebu City in the Philippines. He has not fought since Mar. 11 when he scored a second-round knockout win of Ibrahim Balla in Altona North, Australia. That fight came almost eight months after Rosales was knocked out in two by junior lightweight contender Jhonny Gonzalez.

Also fighting on the Top Rank card will be Vikas Krishan, who will be making his pro debut. Krishan will face Steven Andrade (3-3, 1 KO) in a six-round junior middleweight bout.

Krishan, who is considered the most decorated amateur in the history of India, represented his country in the 2012 and 2016 Olympic Games.

Junior middleweight contender Carlos Adames (15-0, 12 KOs) of the Dominican Republic will square off against Juan Ruiz (21-3, 13 KOs) in a 10-round bout. Ruiz is originally from Venezuela and now resides in Tijuana.