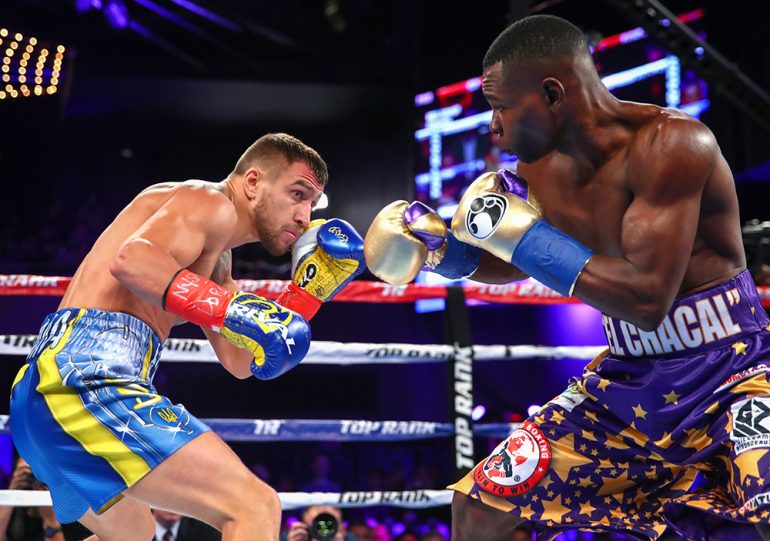 Guillermo Rigondeaux will finally make his return to the ring.

The 10-round bout will take place at the Microsoft Theatre in Los Angeles and will open the FS1 and FOX Deportes telecast (8 p.m. ET/ 5 p.m. PT).

The fight will be contested at a catchweight of 123 pounds.

Rigondeaux (17-1 1 NC, 11 knockouts) has not fought since Dec. 9 of last year, when he lost to then-WBO junior lightweight titleholder Vasiliy Lomachenko. Stepping up two weight classes to make the battle of double Olympic champions possible, Rigondeaux was dominated by the naturally bigger man and remained on his after the sixth round.

Following the fight, Rigondeaux claimed he fractured his left hand, but only bruising was detected when the former champion was checked out in hospital.

The 38-year-old Rigondeaux fought four times under the RocNation banner. After amicably parting ways with that promotional outfit in August, the southpaw veteran signed a deal with Premier Boxing Champions (PBC) in October.

Originally from Santiago, Cuba, Rigondeaux now resides in Miami, Florida. He is currently being trained by Ronnie Shields, who also works with his countryman Erislandy Lara.

Delgado (16-8, 9 KOs), who resides in the Mexico City area, was stopped by junior featherweight contender Joshua Greer in his last bout on Sept. 28.

The 27-year-old Delgado has lost six of his last seven fights. Among his conquerors are Joseph ‘JoJo’ Diaz, Diego De La Hoya, Emmanuel Rodriguez, and Brandon Figueroa (who meets Moises Flores on the same card).

In the main event, Jose Uzcategui will defend his IBF super middleweight title against the unbeaten No. 2 ranked contender Caleb Plant.