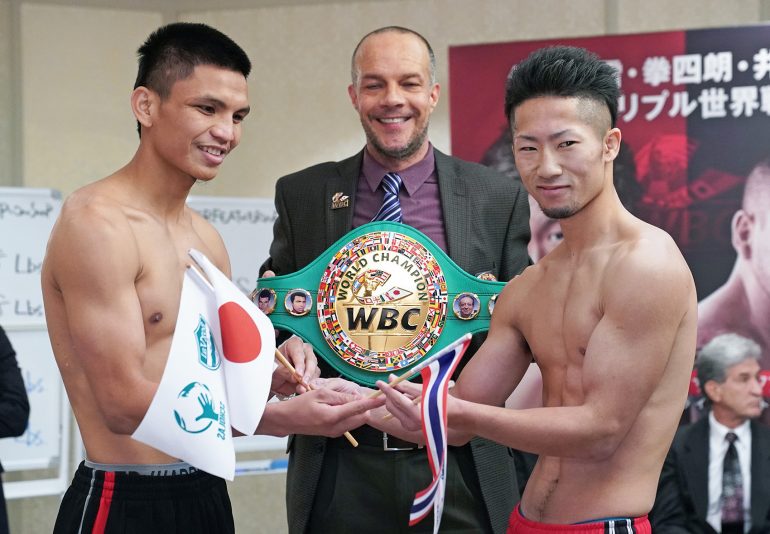 All three judges had the scores of 117-111 for Inoue, who earns a shot at the winner between Nordine Oubaali and Rau’shee Warren, who will fight to claim the WBC title that had been stripped from Luis Nery.

The color of the night for Inoue was green trim along the border of his white trunks, with the rest of his team wearing the Ohashi Gym colors of red and black, including his older brother Naoya Inoue who was in his corner, along with their father Shingo Inoue who was nominated as trainer of the year by The Ring for his work in 2018.

The crowd, decked out in green “Naoya & Takuma” t-shirt,  began to fill the Ota-City Gymnasium with anxious cries before the bell which continued into the opening seconds with a charging Takuma giving Petch a taste of his power early. The taller Petch wasn’t deterred and offered Inoue solid body shots but was countered nicely with a left hook to the head.

An aggressive Petch was met with swift defense and painful counters in the second as the realization of his opponents skillset was setting in. An accidental head-butt stopped action momentarily. A cut was seen above the left eye of Petch, while Inoue suffered a small nick on his nose.

The cut proved to be a nice target for Inoue who also landed a couple of tough uppercuts but was given a series of body shots in return throughout the third. A comfortable Inoue seemed to be sizing up his taller opponent, though both were buckling in for what each predicted would be a good fight.

The fourth saw Inoue continuing his jabs with excellent footwork, using the space of the ring while Petch stayed after Inoue and stuck to what seemed like a plan to attack the body. All three judges had the fight scored 39-37 for Inoue after four.

The same scenes were repeated in the fifth with Inoue looking comfortable in the pocket and picking his shots at his careless opponent who couldn’t find an answer.

Heart and determination are two keywords that described the relentless pursuit Petch continued to showcase while older brother Naoya yelled at his sibling to go to the body during the seventh.

The game Thai seemed to slow the output of Inoue’s punches into the eighth. Dipping and dodging hooks in the corner, Inoue kept his footwork on par and danced around Petch to meet him with strong jabs on the other side, before backing away.

Round nine continued with Petch searching for a knockout offering power shots but not connecting flush with any while Takuma kept taking his opponent back to the corner where he worked out with jabs and turned him around yet again with body shots and combinations. The power was lacking as none stunned Petch who kept after him before Inoue took him to the corner again and began a series of power punches that seemed from ringside to hurt Petch, if not completely physically, then definitely mentally.

Petch finally caught Inoue with a clean right only to be met with a series of combinations that ended as quickly as they began with Petch returning fire after taking a good ten shots. Petch used his size advantage to press Inoue a bit more with Inoue perhaps surprised his onslaught didn’t have more of an effect against the relentless Thai.

Round eleven started with both fighters keeping up the same level of energy and intensity as they had in the opening rounds. Needing a knockout to win, Petch stayed after Inoue, gaining some offensive success but without any real defense to keep from getting hit by counters.

A solid uppercut and right jab connected for Petch that drew responses of shock from the crowd. Petch didn’t really take any additional chances. With a comfortable lead, Takuma mostly stayed away from his opponent. That changed when Takuma invited him into the center of the ring for a trade of punches in the final ten seconds.

“It’s a great feeling [to be the WBC interim champion]. Petch was better than in his videos. This is not a real championship belt yet so I’ll keep looking ahead. I wanted to make an impact in the first round. I can’t say I’m the same level with Naoya yet so I’ll keep going forward,” said Inoue afterwards to the crowd.