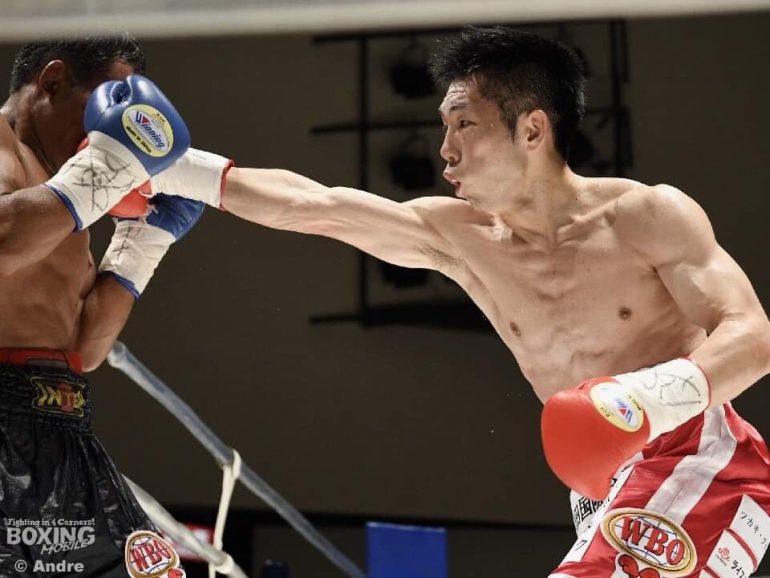 Masahiro Sakamoto has five stoppage wins since his only defeat, a majority decision against Sho Kimura in 2016. Photo by Andre Ueda of Boxing Mobile
25
Dec
by Nick Skok

Perhaps the least known Japanese fighter among the six participating in title fights over the two day period from the 30th to the 31st, Masahiro Sakamoto is very serious about what he’s trying to accomplish on New Year’s Eve. That’s when he’ll challenge Moruti Mthalane for his IBF flyweight title in the opening act of a triple-header set at the Wynn Palace Cotai.

“I’ve been prepared to KO him,” said Sakamoto to The Ring.

“When I see my chance, my instincts tell me to finish it, and the accuracy of my punches improve.”

Sakamoto (13-1, 9 knockouts) has five consecutive knockout wins and has no intention of seeing that streak end when he meets the 36-year-old champion from South Africa.

Mthalane (32-2, 24 KOs) has impressively stayed in the win column since 2008, a remarkable steak in its own right that isn’t lost on Sakamoto.

“Mthalane has strong defensive techniques and the mental strength to successfully operate his overall strategy.”

On paper, Sakamoto is a heavy underdog, and is ranked no. 14 by the IBF, but isn’t concerned about the odds, warning Mthalane “I don’t know what the champion thinks, but if he takes me lightly, then that’s fine. I’ll upset him.”

It was just this past weekend that a no. 13 ranked flyweight named Charlie Edwards upset Cristofer Rosales for the WBC title.

Nine years younger than the champ, Sakamoto points to his own experience, saying, “I faced former WBO champion Sho Kimura so I’m not sure if [Mthalane] is even the most difficult opponent of my career.”

Sakamoto joins a large contingent of Osaka natives for the fights in Macau. Kazuto Ioka and Hiroto Kyoguchi, both featured after Sakamoto on the card, were all born in Japan’s second largest city as well and look to make a clean sweep on New Year’s Eve.

“Even though it’s not my home country, it’s definitely a big help to hear people from Japan [at the fight]. I’m grateful that Mthalane came here, near Japan.”

The New Year’s Eve fights are the most important for Japanese boxers. Think Cinco de Mayo and combine that with Christmas, and you’ll understand what’s happening on this side of the boxing world.

Sakamoto can make it a habit, beginning with his fight against Mthalane.

“I respect that he defeated strong opponents and doesn’t show his age at 36 years old. However, I’ll be the one who welcomes the new year as champion,” said Sakamoto.