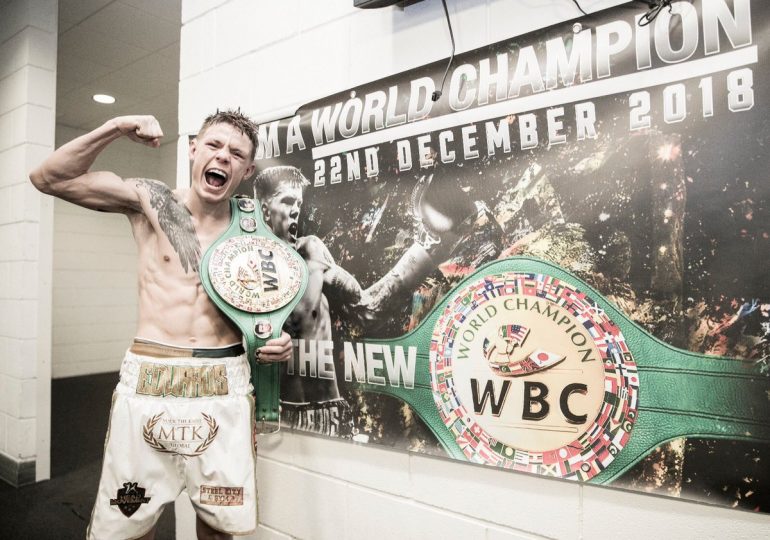 Charlie Edwards holds the championship belt in front of the poster in his dressing room predicting his victory. Photo from Edwards' Twitter account
25
Dec
by Ryan Songalia

Charlie Edwards still isn’t sure if Saturday night was just a dream.

He remembers for weeks coming home to his bedroom with the poster that read “I AM A WORLD CHAMPION” and “AND THE NEW” with the date, December 22, 2018, and the WBC flyweight belt. For the past year and a half he had been an adherent to the Law of Attraction, and had internalized the belief that he was walking to the ring as world champion, not as the underdog challenger.

And yet, even after returning to the dressing room at the O2 Arena, kneeling before that same poster pinned to the wall, and then presenting the belt to his mother Terry, who had been wheelchair-bound since falling ill to a succession of ailments over the past four years, it remains hard to wrap his mind around the fact that he defeated Cristofer Rosales.

“Even today walking around clear of the pay-per-view event and everyone’s congratulating me. It’s been a bit overwhelming but it doesn’t really feel like I’m a world champion, if you know what I mean,” said the 25 year-old Edwards (14-1, 6 knockouts) on Sunday evening.

“Even though I won the world title I’m not satisfied, if that makes sense. I’ve always said I’m not in the game just to win a world title. I’m one of them people who always looks on to the next thing. In my head I’m like I want more.”

Still, it had been cathartic to fulfill that promise to his mother. Through the years she had undergone tribulations, including several strokes and bleeding on the brain. The family had said their goodbyes to her on several occasions, only for her fighting spirit to hold out once again. She had been hospitalized with what doctors initially suspected was another brain bleed, and had only been discharged from the hospital on the week of the fight.

Caught in the moment ❤️ pic.twitter.com/L77xx2fbUM

“When she fell ill, she made me promise to never give up on my dream no matter how bad she gets. She said ‘you are going to be a world champion one day’ and I promised her then I would bring her the belt one day,” said Edwards, who was on the Great Britain amateur team for six years beginning at 15.

It was only the second time that Edwards’ mother had been in attendance at one of his pro fights, with the last one being his pro debut on January 31, 2015 in the same building. She was too ill to attend his first world title attempt in 2016, when he was stopped in the tenth round two years ago by IBF flyweight titleholder John Riel Casimero. The disappointment of not being able to make her prediction true then had torn him apart.

The loss could have dashed his dreams, but instead it fortified them. Edwards realized that he hadn’t put in the ground work he needed to, hadn’t gotten the sparring necessary to improve his skills, hadn’t had the step-up fights in his brief eight-fight career to get over the championship hump.

“It made me realize I wasn’t the fighter I thought I was. I got caught up in all the hype being on Sky Sports, turning pro, and getting these domestic titles and then international titles. I was on the hype train and I thought I was better than I was,” said Edwards.

A year ago, Edwards left the comforts of London and headed to Sheffield, switching trainers from the venerable Adam Booth to the lesser-known Grant Smith. Smith had been training his younger brother Sunny Edwards, an unbeaten super flyweight with a 10-0 (3 KOs) record, for the past five years, and his Steel City Boxing Gym had been an amateur champion manufacturing plant before opening up to professionals. Most importantly, Smith had more time to focus on Edwards than Booth, whose gym is packed with a who’s who of British talent.

Edwards had been planning to move to Sheffield earlier, having been impressed by Smith’s work train his son Dalton Smith from the age of five to become one of the top amateurs in Europe, but an ex-partner of his was adamant she wouldn’t move. Eventually he did go, and Smith began the process of breaking Edwards’ style down to the basics and rebuilding him.

“I knew Charlie had it in him to become a world champion,” said Smith at the post-fight press conference. “There were certain things we had to work on and drill into him…and just put it into him like that to get every little moment right and explain it in every little situation.” 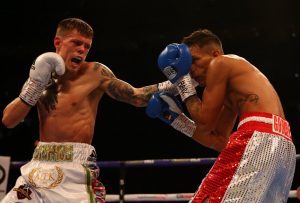 Edwards began the road back by moving to 115 pounds and winning the British super flyweight title, and then knocking out Anthony Nelson with a single overhand right in his previous fight. He’d always been a truer flyweight and had traveled to Malaysia earlier this year to scout a potential fight with IBF flyweight titleholder Moruti Mthalane. When a Mthalane fight didn’t materialize, his management team MTK Global and promoter Matchroom Boxing turned their attentions to Rosales, succeeding on the second round of negotiations after bringing more money to the table.

Rosales, a Nicaraguan road warrior, had been a terror to hometown fighters this year, beginning in April when he traveled to Japan and pummeled Daigo Higa into submission over nine rounds to seize the title. Then in August he faced Paddy Barnes in Belfast, knocking out the former Olympic star with a single right hand to the body in the fourth.

Edwards needed a game plan, and drew from the experience of the Casimero fight to avoid rushing in and getting hit needlessly. The plan was to take half-steps around Rosales, and then surprise him with a push jab whenever he came forward with his heavy jab thrown with everything behind it. To break his rhythm he’d walk him backwards to the ropes, and after a slow first round, Edwards’ tactics began paying off.

“I felt like I was boxing like the champion and he was trying to come and take the belt from me,” said Edwards. “Once I started getting his rhythm, and he started forcing it a bit more…it allowed me to hit him with the cleaner shots.”

When the scores were read out – 116-112, 118-110 and 117-111 – and the words “And the new!” came from announcer David Diamante’s mouth, Edwards fell to the floor in tears. It’s what he had dreamt of since he was 11, when he’d become interested in boxing after listening to his father and his friend talk about the sport in their shop and asked if he could try it.

Promoter Eddie Hearn, who had signed him straight off the Great Britain squad, recounted how difficult the road back had been for Edwards, which included fighting for low purses as he proved his mettle.

“I would like to see him be involved in big fights in America. I think British world champions get a defense or two in the UK and then go out there and have a really big unification or flagship fight. I think he’d thrive on that.”

There’s a possibility of a rematch with Rosales, while an all-British showdown with no. 1 contender Andrew Selby, a former amateur rival of Edwards, looms in the distance. There’s also the possibility of revisiting a step-up in weight against WBA junior bantamweight titleholder Kal Yafai, whom Edwards had been chasing during his time at 115. The fight appeared on the verge of being made, and Edwards even vacated his British title in anticipation of it, only for the fight to fall through and Edwards be left without his bargaining chip.

“He could hold the belt, move up and fight Yafai, but he’ll probably say ‘Fuck Yafai now, he can wait,’” said Hearn, who promotes both champions.

“I want to unify the division. Obviously the rematch clause is in place, we’re not sure what’s happening with that, I’m sure Rosales will want a rematch,” said Edwards.

“I would also love Kal Yafai. These are all fights that I want and I believe they will all happen, and it’s just about waiting for it to process through.”

When will it finally sink in that he is champion? It wasn’t on Sunday, even after he watched the replay back. Maybe it’ll be when his version of the championship belt finally arrives in the mail.

Or maybe it’ll remain a void that keeps pushing him to chase bigger plateaus.