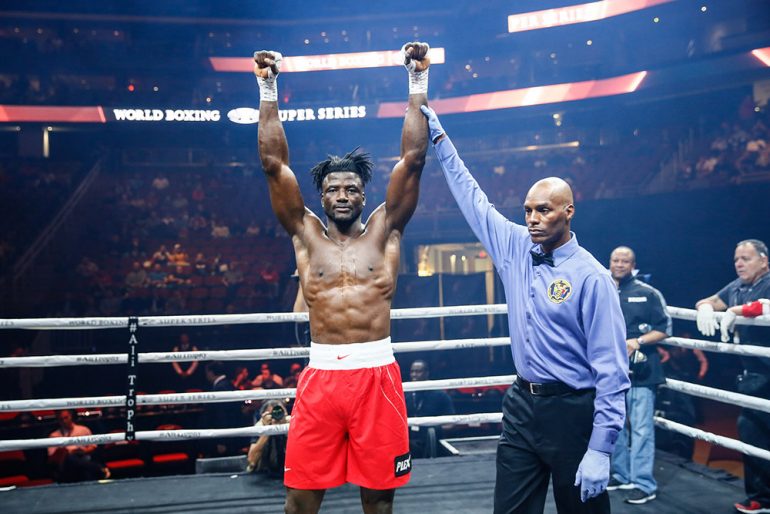 NEW YORK — The action didn’t end in Brooklyn once the Charlos’ fights were over.

Terrell Gausha, a 2012 U.S. Olympian, rebounded from his only professional defeat, scoring a first round knockout of Joey Hernandez at 2:51 of the first round in a late swing bout at the Barclays Center.

A right uppercut dropped Hernandez face first in their middleweight fight, convincing the referee to halt the fight when the Miami, Fla. based fighter rose off the canvas on unsteady legs.

Gausha (20-1, 9 knockouts) of Cleveland, Ohio was last in the ring 14 months ago, when he lost a unanimous decision to Erislandy Lara for the WBA junior middleweight title. Hernandez (27-4-1, 17 KOs) had won three straight following losses to Julian Williams and Austin Trout in 2015.

In the walkout fight, Efe Ajagba (8-0, 7 KOs) barely got going before Santino Turnbow (4-4, 3 KOs) was on the canvas. A left hook appeared to be the finishing punch, though some who remained in the crowd booed thinking that the 36-year-old from Cincinnati was just looking to get out of the fight.

Ajagba, a 2016 Olympian representing Nigeria, has now finished seven of his fights in the first round, including a bizarre situation earlier this year when his opponent Curtis Harper walked out of the ring at the opening bell.