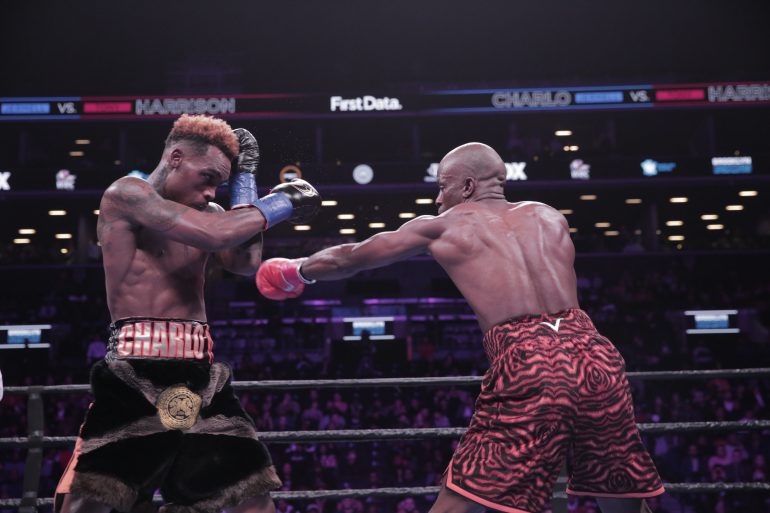 NEW YORK — Tony Harrison jumped up in astonishment. Even he couldn’t believe he was declared the winner.

Jermell Charlo appeared to cruise to victory over the final rounds of their 12-round title fight Saturday at Brooklyn’s Barclays Center, but the judges shockingly preferred Harrison’s work. The massive underdog lifted Charlo’s WBC junior middleweight title in one of the biggest upsets of the year, if not the most controversial.

Harrison handed Charlo his first professional defeat and spoiled plans — momentarily at least — for a 2019 showdown between Charlo and Jarrett Hurd that would have crowned a new Ring champion at 154 pounds.

Charlo, 28, was teary-eyed at the post-fight news conference. “I ain’t no loser, man.” Of course, he didn’t actually believe he lost. The Houston native, fighting in the PBC on FOX co-feature before his twin brother competed against Matt Korobov in the main event, was steadfast that the judges robbed him.

“They took that fight from me,” said Charlo, The Ring’s No. 2 junior middleweight. “I was pressing the action. He didn’t win that fight.”

Sure, Harrison (28-2, 21 knockouts) had his moments. The 28-year-old from Detroit buckled Jermell with a counter right in Round 5. He was able to bother Jermell with his jab. He executed a solid gameplan. For much of the fight, though, it was Charlo who was the effective aggressor.

Charlo (31-1, 15 KOs) connected on two powerful right hands in the opening frame. A left hook to the body followed by a right hand upstairs grabbed Harrison’s attention in Round 3. Harrison was content to allow Jermell to attack first; he was looking to counter.

Harrison was stunned by a right hand to the body, followed by a left hook to the head in Round 5. Then a massive overhand right toward the end of the round sent the challenger reeling. He was shaken up again at the beginning of the following frame.

Even though Jermell hurt Harrison on several occasions, he never became reckless. Harrison is regarded for his power, so Charlo was likely being cautious. He was loading up on his shots, much to the chagrin of Derrick James, The Ring’s 2017 trainer of the year.

Harrison’s counter-punching, jab and movement won over the judges, even though he was on shaky legs several times over the last few rounds. Charlo outlanded Harrison, 160 to 128, per CompuBox; he held a 108 to 71 advantage in power connects.

Harrison’s two defeats came at the hands of Willie Nelson and Jarrett Hurd, both ninth-round stoppages. He developed a reputation for fading late in fights, but he kept his composure this time.

Jermell said he had a rematch clause in the contract. He plans to exercise it and fight Harrison again in the next four months.

For now, a fight between Charlo and Hurd seems farther away than ever before.