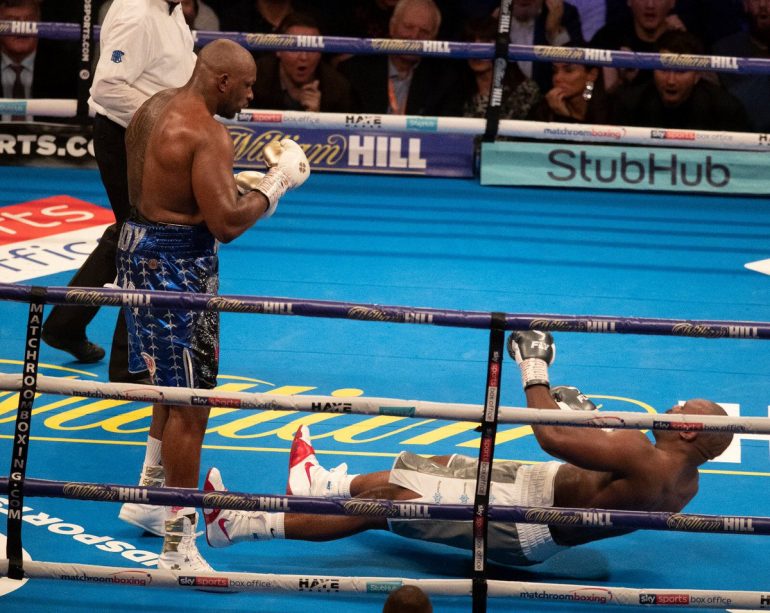 Dillian Whyte found a perfect left hook on Saturday night to bring his fight with old adversary Derck Chisora to a dramatic conclusion in the 11th round of their heavyweight clash at the O2 Arena in London, United Kingdom.

Early on Chisora was aggressive and pushed the action but it was Whyte who landed the cleaner punches to carry the first two rounds. In the third round Chisora’s aggression paid off and he began to find a foothold in the fight.

As the rounds passed Whyte was on the backfoot trying to use his jab and mix in body shots but was being largely outworked by Chisora who strung several rounds together and was ahead at the half way mark of the fight.

The rounds were close and both men were landing their shots, although the feeling was Chisora’s greater activity was paying dividends. Point deductions from Chisora in the eighth for low blows and eleventh for rough housing kept matters on a knife-edge.

As the action continued in round 11, Chisora threw a combination that didn’t land, Whyte countered with a fight ending left hook to lay Chisora out flat on his back where he was counted out by referee Marcus McDonnell at 1:56 of the round.

At the time of the stoppage Chisora was ahead on two of the scorecards, 95-94, while the third scorecard had Whyte ahead by the same score. Whyte won their first nearly two years ago to the date by split-decision in Manchester.

Thankfully, Chisora, who dropped to 29-9 (21 knockouts), was able to sit up and seemed to be OK. Whyte, who is rated no. 5 by THE RING at heavyweight, elevates his record to (25-1, 18 KOs), with his lone defeat coming against his promotional stablemate and current WBA, IBF and WBO heavyweight titleholder Anthony Joshua by seventh round stoppage in 2015.

“I hurt him in the first round and I thought ‘relax,'” Whyte said of the Chisora knockout. “I knew it would come. He kept on making the same mistake, bobbing and weaving. That was the money shot right there, I will always land it at some point.

“I’m a warrior; I want a scrap but I was pacing myself, I knew it was gonna come. I’m number one baby, let’s go.”

Whyte pointed to Joshua at ringside, who was commentating for Sky, and said, “I want that lanky piece of s–t next.”

Joshua responded with a smile and entered the ring, saying “If anyone deserves a a title shot it’s Dillian. Deontay Wilder is the target but if not it’s Dillian Whyte.”

Joshua is penciled in to fight at Wembley on April 13 and Whyte put himself in the box seat for a rematch, as he remains the number one contender for the WBO title, plus the WBC belt currently held by Deontay Wilder.