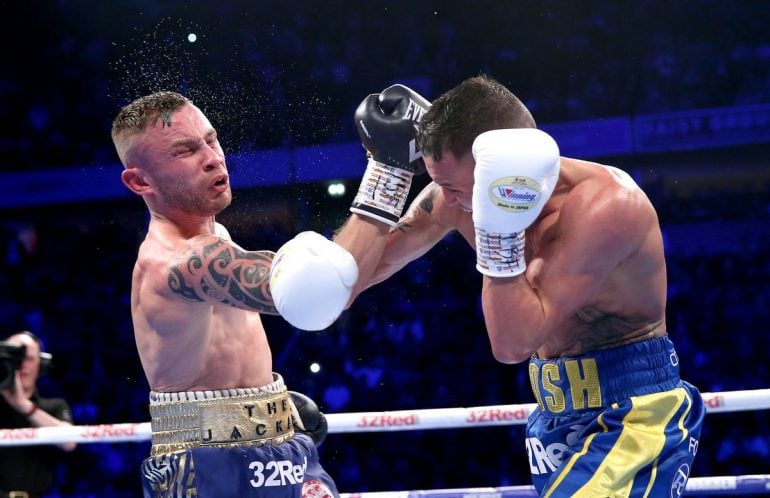 MANCHESTER, England – If you thought Josh Warrington simply lucked out when he outpointed Lee Selby to win a world championship, think again.

The reigning IBF featherweight titleholder from Leeds, England, scored an emphatic 12-round unanimous decision over former two-weight world champion Carl Frampton at the Manchester Arena on Saturday. The official scores were 116-113 and 116-112 twice.

Warrington, who is rated No. 6 by The Ring at 126 pounds, produced a career-best performance, trumping his title win over Lee Selby in May be some distance. Again he completed the task as underdog, kicking dirt in the faces of all his doubters en route to a brilliant victory.

“It takes two to make a fight like that and hats off to Carl Frampton,” said a humble Warrington during his post-fight interview with BT Sport. “The fans made it a fantastic atmosphere. Carl Frampton will go down as a great featherweight and it was an honor to share the ring with him.”

The Belfast crowd made the most noise before the fight, but the Leeds crowd had the most to cheer about during a frenetic first round. After a cautious opening Warrington (28-0, 6 knockouts) exploded into a prolonged two-fisted attack, stunning the former champion badly.

If that was a shock to those in attendance, the underdog repeated the dose in Round 2, ruining the sharp boxing Frampton had utilized earlier in the session. Frampton was under intense fire and Warrington looked absolutely sensational as an aggressive force. 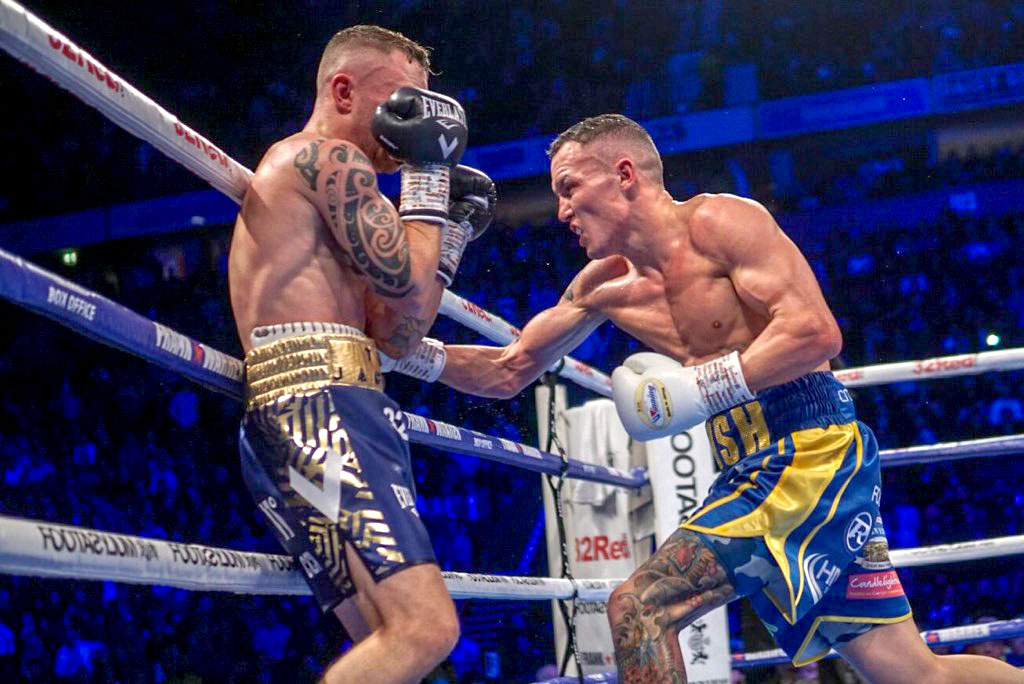 The pace slowed briefly allowing Frampton to get a foothold in the contest, but Warrington dragged the Belfast man into another torrid exchange in the fifth and, again, he got the best of it. It was the same again in the sixth and although Frampton responded well, Warrington was able to release his shots more effectively up close.

It was a great fight, but Warrington was in command in terms of how the action played out. Frampton would be allowed time and distance periodically, then the man from Leeds would explode into energetic flurries and take the play away from him.

Frampton (26-2, 15 knockouts) had his best moment in the eighth when a terrific combination made Warrington pause, but he needed more of that. Much more. Warrington flew out of the blocks for the ninth and attacked with abandon, banking another round with red-hot aggression and sharp punching. Coming into the 10th Frampton needed a knockout and, despite bouncing his best off Warrington’s chin in the championship sessions, he didn’t come close.

Warrington scored a 12-round unanimous decision over Selby in May. It was a fabulous performance by the Leeds man, but there were many who felt the result flattered to deceive because Selby was dead at the weight. Tonight, Warrington defeated a fighter of the highest caliber and there are no excuses whatsoever. The 28-year-old champion is for real.

At 31 years old, Frampton faces a tough road back. The former two-weight world titleholder has accomplished so much in his career already and he’s a devout family man. Does the Belfast hero have the ambition and drive to launch a comeback and position himself for another world title fight? Time will tell.

“I was in incredible shape,” said an emotional Frampton after the fight. “I was fit and strong, but Josh was fitter and stronger. I was hurt a number of times and whoever said Josh can’t punch don’t know what they’re talking about.

“I’ll sit down with my team and figure out the next move.”

In an all-British shootout, Liam Williams scored a very impressive 10th-round stoppage of Mark Heffron to claim the British middleweight championship. The official time was 1:55. Williams boxed beautifully from the opening bell, dictating terms with an accurate jab and swift straight shots through the middle. Heffron (21-1, 17 KOs) could never get set and was gradually worn down. The fight was stopped when Williams unloaded with scores of brutal power shots and Heffron failed to respond.

At middleweight, Hassan N’Dam scored a 12-round majority decision over four-time world title challenger Martin Murray. Official scores were 117-112, 116-112 and 114-114. N’Dam was the busier and more accurate fighter throughout, which was impressive given that the 34-year-old contender had been out of the ring for 14 months. Murray was given credit for a knockdown at the end of the fourth but could never land enough leather on N’Dam to do significant damage.

Former amateur standout Michael Conlan won a 10-round decision over Jason Cunningham at featherweight. The scores were 98-92 and 97-92 twice. For the most part, the Belfast star was a step ahead, although he was momentarily buzzed with a solid right hook from his southpaw opponent in the fourth and deducted a point for a low blow in the fifth. He closed well, though, almost stopping Cunningham in the final session with a blazing finish, Conlan improves to 10-0 (6 KOs) and will likely be contesting major titles in 2019.

Weighing a career heaviest 178 pounds, former WBO middleweight champion Billy Joe Saunders put a horrendous 2018 behind him by scoring a ridiculously easy stoppage of Charles Adamu. Despite carrying an additional 20 pounds, Saunders proved to be leagues above his opponent and landed what he wanted when he wanted. Adamu, likely sickened by scores of powerful body shots, was pulled out by his corner at the end of the fourth.