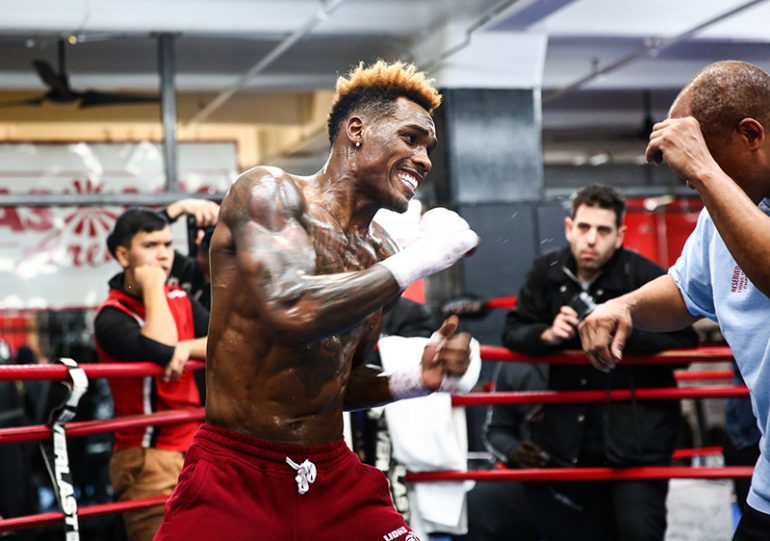 Jermall Charlo, if he comes out of the blocks Saturday night at Barclays Center versus Matt Korobov like he did at Wednesday’s media workout at the famed Gleason’s Gym in DUMBO, Brooklyn, then the respected late-sub will be headed back to the locker room right quick.

The middleweight Charlo, who holds a 27-0 mark, was asked what he thought about the opponent switch, as Willie Monroe from Rochester, N.Y., tested positive for excessive testosterone and was drummed out of the bout, replaced by the 35-year-old former amateur standout from Russia.

‘Mall, who finished up the session with a chat with TMZ, took a double-barreled blast at Monroe and Victor Conte, who consults with the ousted boxer and gives advice on supplements and conditioning. He termed Conte and Monroe as “unprofessional.” Jermell, the little brother, said he thinks Willie should be tossed from boxing for good.

Jermall took the opportunity to defend himself and his brother, because they took slings and arrows for missing a test set by VADA. They missed the test because they were out promoting their bout, and “cheaters never win,” he said, lifting up his shirt to show a majestic six pack. He said Conte and company have been busted too many times, again, and generally had a viciously intense tone. He swore, he rocked back and forth as he tried to contain the fury. “I have nothing to prove to nobody but myself that I’m one of the best in the world,” he said, before apologizing for being “so vocal.”

Jermall told us that he wants to big bouts. “I want to see how talented I am against whoever out there. I don’t care about being an undefeated fighter, or being this big role model, I’m not trying to put on a persona, I’m not fakin’ it, I wanna fight, see all this work me and Ronnie Shield been doin’, what is it, what is this about? …Now it’s time to see what we made of!”

The heated hitter told us to get on the line with DAZN to help make a big bout. “Lions Only is here to take over whatever’s out there!”

Jermall in fact had to grasp for the name of his foe, and was fed the name “Matt Korobov.” He hasn’t actually done any watching of the Russian, he just saw a pic is all, he said. “We didn’t know the emeffer was out cheatin,” he said, getting in another launch at Monroe.

Yes, he was on a helluva rant roll…

Then he segued somehow into philanthropy; he will give ten bikes for every jab he throws in Barclays to people hit by the California wild fires. 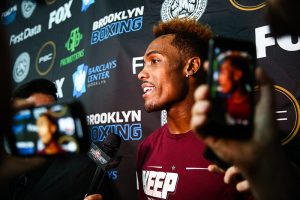 Jermall pulls no punches with the media. Photo by Stephanie Trapp / TBG Promotions

Bang, heavy hitting….he then demanded the media start keeping it real. Basically, he is wanting everyone to bang the drums and help force the Canelos and GGGs to step to him, a younger and/or more experienced pugilist. He pointed at a press man for asking an erroneous question and then didn’t miss a step…

Middleweight Charlo also showed a softer side, still using that fiery delivery, when he said he loved trainer Ronnie Shields “to death.”

Back to those big bouts…Jermall will take B-side concessions in order to land that super fight, he shared.

His ability to hold our attention, keep people listening while he spoke, is of a high grade. And that, combined with a skill set that his backers believe can have him in the mix and maybe surpassing the division’s ultra elite.

Oh and no, Jermell (31-0) wasn’t over shadowed by “big” bro; his rant against PED usage in the fight game was pretty classic, because it wasn’t something we expected to hear.

The 154 scrapper told media that he thinks Tony Harrison is solid, but he will have a lot of pressure on him, and is tall and rangy. “He knows what he’s dealin’ with,” he said. But, he said, Tony has a champion’s heart, though he hasn’t won a title.

Then he got cookin’… “I’m the best in the world,” he declared. And then he touched on the probably impending face-off with Jarrett Hurd, which will be one of the five most anticipated bouts of 2019.

“I’m thankful to be on Fox, because they’re in more homes than Showtime,” he told us, when asked about the stakes. 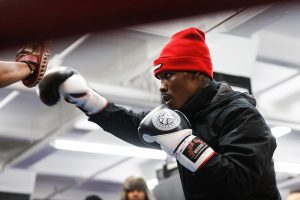 Jermell was just as outspoken as his twin, perhaps more so on the subject of PED use in boxing. Photo by Stephanie Trapp / TBG Promotions

Then, gas to the fire… “They should suspend him from boxing. Monroe shouldn’t be allowed to come back to (boxing)…This is my life we’re putting on the line, my brother’s as well…I’m glad they was able to catch this before…It sucks, that someone would cheat, and they know that they’re cheatin’, we haven’t heard anything from Willie, saying anything about testing…It’s ugly, it’s bad business for the sport.” He then said that him and his brother didn’t deserve scorn for missing a WBC Clean Boxing Program VADA test. “There’s nothing we can do if we’re not there,” he said. “We need the sport to be cleaned up.”

He wants the penalties for cheating to be harsher, he repeated. “Take all his bread…Take them away from the sport, they shouldn’t be allowed back, they should be banned for life, and probably sentenced to a jail sentence or something, make them do probation or something, this is life risking…Yeah, send their ass to jail!”

My three cents: It was neck and neck on which Charlo stole the show. Jermell went all in on PED cheats and Jermall on demanding a step up, career definer.

These media workouts can be a bit dry, with fighters offering boilerplate responses. But this was one of the better ones that I recall. Here’s hoping the featured bouts approach the spiciness of the Q&A at Gleason’s.