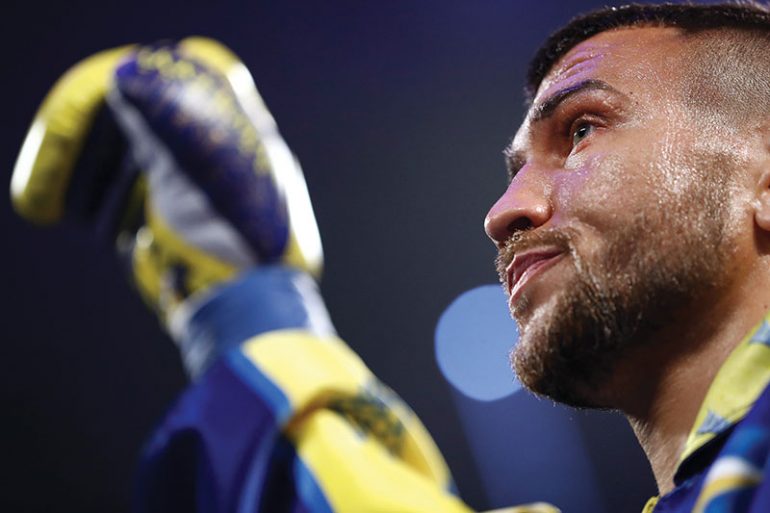 NEW YORK, NY - MAY 12: Vasiliy Lomachenko looks on before his fight against Jorge Linares during their WBA lightweight title fight at Madison Square Garden on May 12, 2018 in New York City. (Photo by Al Bello/Getty Images)
12
Dec
by Mike Coppinger

Vasiliy Lomachenko’s hunt for more lightweight titles will continue in 2019 on the other coast.

Lomachenko (12-1, 9 knockouts) added a third lightweight title to his collection with a decision victory over Jose Pedraza on Saturday at Hulu Theater at Madison Square Garden. The two-time Olympic gold medalist won the WBC and Ring titles at 135-pounds with a knockout of Jorge Linares in May, his first fight at 135 pounds.

Top Rank will keep the momentum going on an ESPN platform in what it hopes is another unification bout for Lomachenko. duBoef said the organization is looking to match Lomachenko with the winner of the vacant lightweight title fight between Richard Commey and Isa Chaniev.

The pair are slated to meet February 2 on ESPN. duBoef acknowledged it could be a quick turnaround for the winner to meet Lomachenko, especially if one of them is cut, so backup plans are being discussed internally.

Lomachenko’s star rises with each sensational performance. The 30-year-old from Ukraine is The Ring’s No. 1 pound-for-pound fighter. His win over Pedraza, which included two Round 11 knockdowns, drew over 2 million viewers on ESPN.