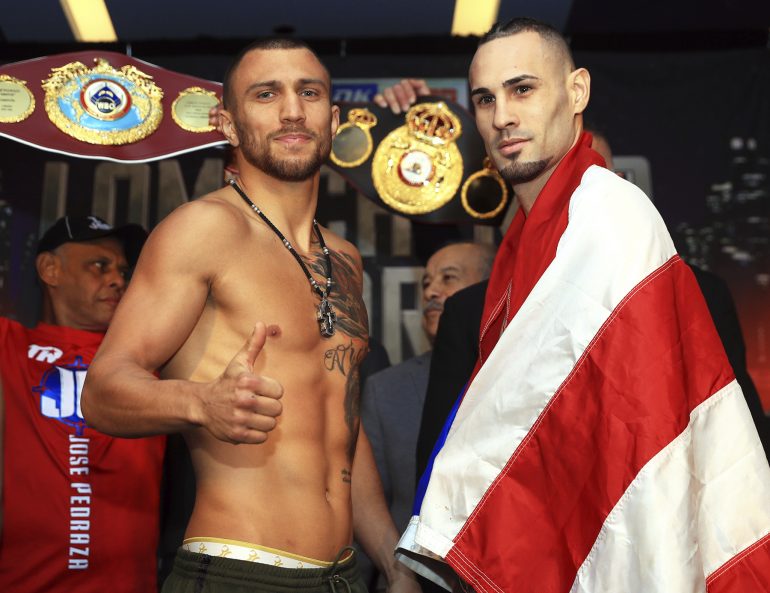 NEW YORK — Through 10 rounds of a competitive main event, the feeling at press row was that we could be looking at another close, controversial decision like the sport has seen recently. That was, until Vasiliy Lomachenko turned it up in Round 11.

Midway through the round, Lomachenko cranked up the pressure and began putting his punches together, stringing together an endless barrage from all angles before a right hook to the body took Jose Pedraza’s breath away and sent him to a knee.

Pedraza, who had boxed the fight of his life up until that point, beat the count but was down once again moments later. He took every second of that count as well before the bell saved him.

Lomachenko focused his attack upstairs, putting another round in the bank in the 12th before the final bell rang. Two judges had the fight 117-109 and the third had it 119-107, all for Lomachenko (12-1, 9 knockouts), who unifies his WBA lightweight belt with the WBO title held by Pedraza (25-2, 12 KOs) at The Theater at Madison Square Garden on Saturday night.

The fight was the first to go the distance for Lomachenko, 30, since his fourth pro fight against Suriya Tatakhun in November 2014. Pedraza, 29, of Caguas, Puerto Rico, snaps a three-fight winning streak following his ninth-round technical knockout loss to Gervonta Davis in January 2017.

“It was my dream to unify titles. It was my next goal. I can now focus on my next chapter,” said the Ukrainian Lomachenko, who said there were no lingering issues with his right shoulder, which required arthroscopic surgery following his 10th-round TKO of Jorge Linares in May.

Pedraza, who won his belt with a decision over Raymundo Beltran in August, kept up with Lomachenko’s boxing through the early rounds. Lomachenko was economical to the point of frugality, but was accurate and effective when he did let his straight left go.

Switching stances with each alternating round, Pedraza was able to give enough variety to throw Lomachenko off, and was able to land more to the head and body than most Lomachenko opponents have. After a strong 10th round, it was all Lomachenko from there.

In the post-fight interview, Lomachenko continued to call for the summit meeting that makes the most sense, yet still seems remote and distant.

“Maybe next year we can make a fight with Mikey Garcia,” said Lomachenko, calling for the unbeaten fighter who is moving up two weight classes to face Errol Spence in March.

In defeat, Pedraza’s stock may have risen as he begins the road back up.

“I am happy with my performance tonight. I went 12 rounds with the best fighter in the world. I knew what we were going up against,” said Pedraza, who thought the fight was close until the knockdowns.

The fight was announced as a packed 5,312 in Midtown Manhattan and headlined a Top Rank card on ESPN.