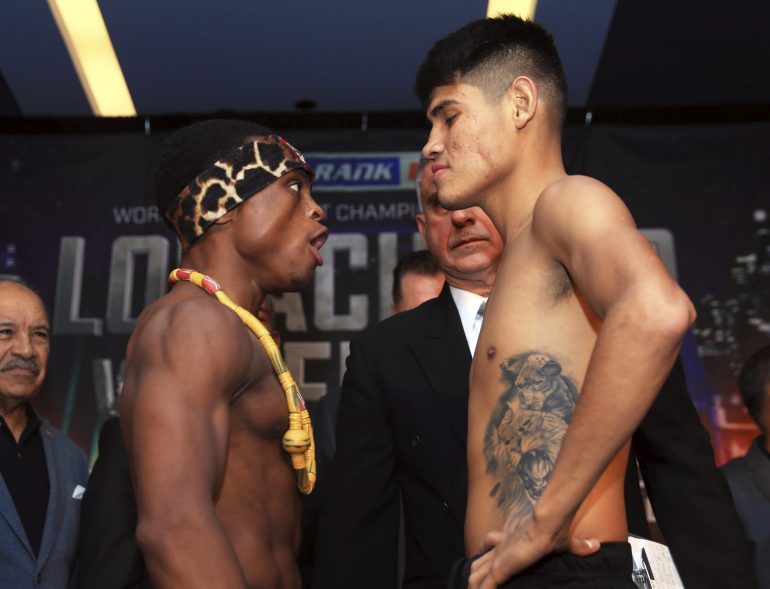 Navarrete (26-1, 22 knockouts) never stopped pressing forward, rearranging the previously unbeaten Dogboe’s face at The Theater at Madison Square Garden to edge it out 116-112 on two cards and 115-113 on the third.

The fight ends a breakout year for Dogboe (20-1, 14 KOs), who began it by knocking out Cesar Juarez to win the interim title, then cashing it in with a knockout of Jessie Magdaleno to win the championship, and then defended it with a first-round stoppage of Hidenori Otake in August.

“It was a great fight, and Emanuel Navarrete fought like a true Mexican warrior,” said Dogboe, 24, said.

“Champions are supposed to keep going under any circumstance, but I just couldn’t get the victory. The best man won tonight.”

Dogboe walked out accompanied by the sounds of live drums, staying for a moment to dance to the tunes before security told him to keep it moving. Up until the final bell, Dogboe shouted “Neho!”, a warrior chant that implores him to rise above a challenge.

After the shellshock of the first-round blitz from Dogboe, Navarrete took over in round two, applying pressure from his taller vantage point and backing Dogboe up to land straight right hands. Dogboe came back by countering with body shots in the third, but a left hook and uppercut in the second half of the round sent him moving in reverse.

By the middle rounds, Dogboe’s right eye was shutting. In later rounds his right eye would close as well.

Dogboe, a Ghana-born, U.K.-raised fighter who is also a student at Penn State, turned the fight in his favor in the seventh, backing Navarrete up with a stiff jab countering with thudding body shots downstairs. Dogboe continued to outfight Navarrete in the eighth and into the ninth, when a right hand seemed to score a knockdown. Referee Benjy Esteves elected not to call it, deciding it had been a shot to the back of the head.

Navarrete, 23, of Distrito Federal, Mexico began to pick the pace up after the non-call, and by the tenth round there was significant presence from ringside physicians in his corner assessing Dogboe’s vision.

Only courage and bravery kept Dogboe standing up in the final two rounds and he swung wildly because of his lack of vision and clinched to hold himself upright. Even in defeat, Dogboe began his post-fight remarks with the same “Neho!” chants he shouted walking in.