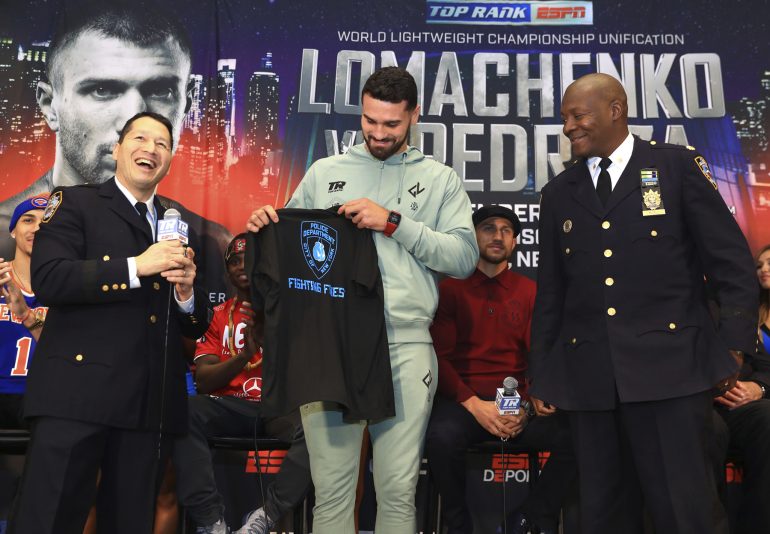 Guido Vianello is gifted a t-shirt from the NYPD boxing team. Photo by Mikey Williams/Top Rank
07
Dec
by Ryan Songalia

NEW YORK — Last week an Abel Sanchez-trained heavyweight assert himself as a contender when Joe Joyce dropped Joe Hanks for the count in Los Angeles. Now on the other coast, another Olympic heavyweight trained by Sanchez will begin his pro career when Guido Vianello makes his debut this Saturday at The Theater at Madison Square Garden.

Vianello will face Luke Lyons (5-1-1, 2 KOs), a 33-year-old from Ashland, Kentucky, in a six-round fight on the Lomachenko-Pedraza undercard. The fight won’t be part of the main card televised by ESPN, but will be available on ESPN+.

For Vianello, just making it to New York is a dream come true.

“When I started in this sport, my dream was to come to New York and fight in Madison Square Garden. In two days, I fight here. I’m very happy and I’m ready and I’m excited,” said the 6’6″ native of Rome, Italy. Vianello had been to Miami before and trains with Sanchez in California, but his first trip to The Big Apple is for this fight.

One of the biggest adjustments to training with Sanchez has been sparring more frequently.

At just 24, Vianello is a rare heavyweight under 30 years of age. He comes from a family of tennis players but showed an acumen for boxing by making it to the 2016 Olympics, where he lost his first bout to Cuba’s Lenier Pero. He made an appearance at the 2017 AIBA World Championships in Germany, winning his first bout before losing a decision in his second.

Vianello should have a bit of experience for the pros after competing in the World Series of Boxing, fighting 12 times against some of the world’s best in what are essentially professional fights.

He did little to temper expectations about him at Thursday’s press conference, comparing his style of fighting to two of the best big men in the sport’s history.

“I am a mix between [Wladimir] Klitschko and Muhammad Ali. I move in the ring and I am aggressive. I want to box and fight,” said Vianello.

Back home, Vianello had worked as a police officer before turning his attention to pro boxing. He was greeted on stage by members of New York’s Finest, who gifted him a t-shirt and making him an honorary member of the NYPD boxing team.

Guido Vianello is a police officer in Italy. The NYPD boxing team greets him and makes him an honorary member pic.twitter.com/y6PggCLdH7

Promoter Bob Arum admits that he had not yet seen him, but says his matchmakers had as he turned to point towards Brad Goodman at the next table.

“The truth is I’m only going with what Abel says. Abel says the guy is really fantastic,” said Arum. Instead of just saying “he’s OK” as he would with an average prospect, Sanchez had delivered unrestrained praise.

Vianello has sparred with Tyson Fury and believes the British big man should have gotten the decision over Deontay Wilder due to his boxing. He thinks he’s four years away from being at that level himself, when he’s fighting for the heavyweight championship.

Arum says he’s interested in getting back into the heavyweight picture, signing a co-promotional deal with Bulgarian Kubrat Pulev, while Top Rank already has a deal with Philadelphia’s Bryant Jennings.

With a few dates scheduled for New York in 2019, Arum says he could come back to The Garden with an attraction like Vianello higher on the card.

“[New York] has always been a heavyweight town,” said Arum.