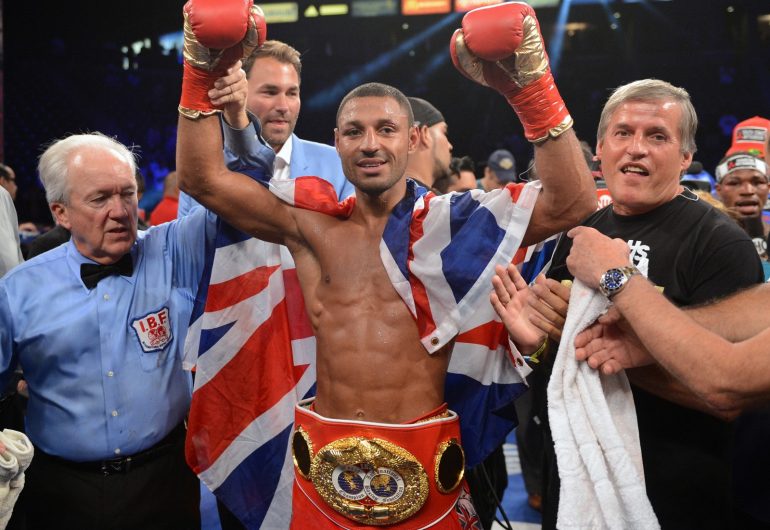 The song is a little bit before my time, but the lyrics are more than appropriate when it comes to the never ending story between bitter British rivals Kell Brook and Amir Khan. Thus far, that story is fiction, plenty of dialogue and no action.

Welterweight? Junior middleweight? Catchweight? How long do we have to wait? The Brook-Khan negotiations have been a horrible British retread of the Floyd Mayweather-Manny Pacquiao saga, and that mega-fight pairing was delayed for almost six years.

Khan, for what seemed like forever, tried to pin down Mayweather. It didn’t happen. He then switched to Pacquiao and – thus far – has had similar luck. The former junior welterweight champion did secure a massive fight against Canelo Alvarez in May 2016, but the 155-pound catchweight limit and a head bursting right-hand shot in round six put an end to Khan’s dreams.

Brook, who is currently rated No. 8 by The Ring at 154 pounds, has lobbied hard for the fight, but Khan has always managed to find justification for going in another direction. In the past several months, however, hopes were raised when Khan defected to Brook’s promotional outfit, Matchroom Boxing, and the feud looked like it would be settled.

Oh, but look out! Is it a bird? Is it a plane? No, it’s yet another incoming curveball . . . Khan is now reportedly in negotiations to face WBO 147-pound titleholder and pound-for-pound entrant Terence Crawford.

“I’ve got no reaction because I’m used to it,” Brook told The Ring with a disdainful sigh. “He’s conning the British public. I thought he came over to (Matchroom Boxing) to make it happen, but I was wrong. He’s turned his back on the British public and he’s not giving the fans what they really want. This is over 10 years of bad blood and a real grudge match.

“I’m not getting my head into it too much because I’ve got a fight on Saturday. I’m just reading what people are saying on social media. I don’t think Khan is scared of me. I just think he’s scared of losing, and he will lose. Losing to me, he’d have to change his name, have a face transplant and leave the country. If he loses to Canelo, or another guy, he can hold his head up. If he loses to me, then he can’t.”

As Brook said, he has a job to do on Saturday. Michael Zerafa, a relatively unknown Australian, is the opponent and Brook will have home advantage at the Sheffield Arena in Sheffield, England, for the 12-round junior middleweight bout.

Zerafa (25-2, 14 KOs) has mixed at top level once, against former titleholder Peter Quillin, but he was knocked out clean in five rounds. That fight took place in September 2015.

“I don’t know too much about him,” acknowledged Brook. “He’s been in with top fighters and was Commonwealth champion. He’s telling everyone I shouldn’t overlook him and I’ll find out why in the first round, so I’m expecting him to come out and give it his best.

“This is his golden ticket because if he beats me he’s in the big time. He’s going to be game and he’s going to put it on me. I’m not expecting him to come over here and lay down. I just need to be professional which I’m gonna be on the night. I’ve not cut any corners in training and I’m ready to go now.”

If the Khan fight is unsalvageable, then Brook still has more options than most. Why? Because the 32-year-old boxer-puncher is a former world champion, a big name and, crucially, he’s willing to campaign in two different divisions.

“I’m keeping my options open,” said Brook. “There are big names at welterweight and (junior) middleweight. Whatever’s the best fight for me, whatever’s beneficial for me, that’s what we’ll look to do. That’s at 154 or 147, whoever, and wherever they are.

“With age comes experience. You stick to the dieting more and you put more into the training because you get the results. By tightening up on things, I can make the weight and I won’t be ballooning up between fights. If I keep on it, I can perform at both weights.”

This fight will be broadcast live in the U.K. on Sky Sports and on DAZN in the U.S.