Gray Matter: No shiny belt for Tyson Fury and he doesn’t need one 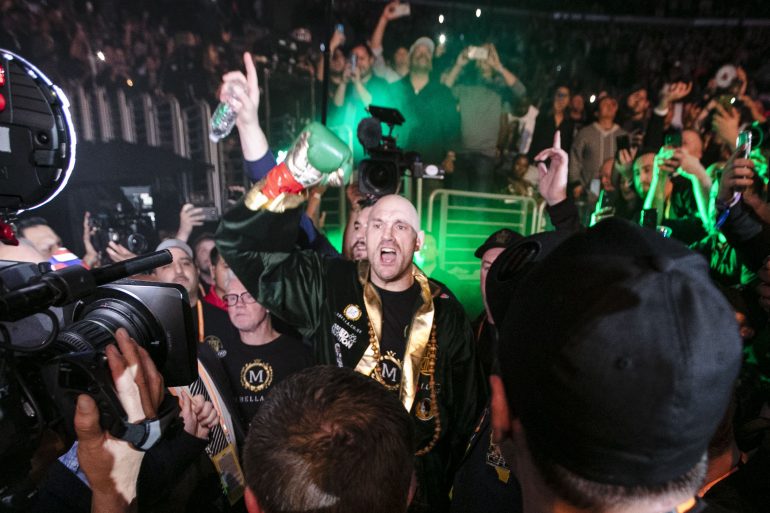 Just before we begin the autopsy on Saturday’s controversial split decision draw, I would just like to direct you to my Deontay Wilder-Tyson Fury pre-fight thoughts from a few weeks ago. All things considered, it was pretty accurate in terms of how the fight unfolded, and I’m just taking this opportunity to pat myself on the back.

Ok, let’s get to the fight.

I scored 8-3-1 Fury (when I watched it live) and 9-3 on my second viewing. When I deduct two points from Fury’s tally for the knockdowns he survived, I’m left with a 115-111 card in his favor. Alejandro Rochin, the Mexican judge who scored 115-111 for Wilder, should not have a license. Then again, as I discovered today, Rochin was one of two officials who voted 116-112 in favor of Danny Garcia in his highly controversial majority decision win over Mauricio Herrera in March 2014. Geez, what a total shocker! To whom it may concern, address shitty scoring at the time and maybe you won’t see it again.

No surprise, the term “subjective scoring” reared its ugly head over the weekend. These are the two signature words used to justify any scorecard in the world, regardless of how stupid it is. “Oh, that’s just the way I saw it!” Well, if you see Wilder winning the first four rounds against Fury, like Mr. Rochin did, then you should slap a big “village idiot” sign on your forehead. Anyone with that opinion is clueless, inept, incompetent – pick out your favorite.

Let’s not spend any more time talking about negatives. With the exception of two explosive pieces of power-punching from Wilder, which produced knockdowns in the ninth and 12th rounds, he was thoroughly outclassed. The champion looked like he was being paid to fan ringsiders with his fists and was constantly made to flounder. The right hand bombs which had decimated every heavyweight on his resume cut harmlessly through the night air and the two bombs Wilder did land were nowhere near enough.

There were a lot of reasons why fans and experts didn’t see the fight going this way and I’m going to address those now. I will also offer my thoughts on where the heavyweight division stands post Wilder-Fury:

Fury’s inactivity
It didn’t mean a thing. Fury has been boxing since childhood and he took this comeback very seriously. Word on the busy British boxing grapevine was that solid heavyweight prospects were being turned upside down in sparring sessions. Fury had his timing back and sharpened his tools for the best part of a year. After a three-and-a-half year layoff, Muhammad Ali got a six-week notice for the Jerry Quarry fight in October 1970 and still cut him to ribbons. Of course that was Ali, but Fury’s approach was more akin to Sugar Ray Leonard when he came back from a virtual five-year layoff to defeat Marvelous Marvin Hagler. Leonard had also trained himself physically and mentally for 12 months.

Fury’s previous crazy lifestyle
It was previous. Fury embarked on this comeback as a 29-year-old man, not an old aged pensioner. At 29 years old, I could go out on the lash (that means drink copious amounts of alcohol), sleep for three hours, make work, look fresh as a daisy and train my guts out the next evening. I’m 43 now. If I nail anything over eight beers in a single night, I’m overloading on headache tablets the next day and I’m scared to look out the damn window. If Fury had come back as a fat, old, out of shape pug who had been making ludicrous lifestyle choices, then he would have been knocked out. He didn’t. He came as an athlete.

Fury’s comeback opponents
Neither former cruiserweight Sefer Seferi nor cautious southpaw Francesco Pianeta belonged in the ring with Fury. That should have been obvious to anyone. However, the former champion didn’t impress, clowning and posturing his way through a brace of nothing fights. On the basis of those low-key performances, Fury detractors wrote his athletic obituary and maintained that his days at top level were over. But what you need to remember is that there are gears in boxing. Fury had nothing to shoot for in those fights and was merely going through the motions. He was switched on against Wilder and you saw the difference.

Fury’s strengths
Because he doesn’t have Muhammad Ali’s grace, Mike Tyson’s power or Wladimir Klitschko’s body type, the assumption from Fury detractors is that he can’t fight. If you’re not aware how stupid that makes you look now, you never will be. Fury is a 6-foot-9, 260-pound switch-hitter who moves around like a middleweight. If he was a knockout artist, the Englishman would probably be world champion for as long as he wanted to be. As it stands, Fury is a tough out for any heavyweight because he’s fast, smart and hard to pin down. Oh, and if you do happen to nail him with a direct hit, then he has decent recovery powers. Does anyone want to argue about that? Didn’t think so.

Fury’s current standing
What a difference 36 minutes makes. In my opinion, the fight to decide the best heavyweight on the planet is now Joshua vs. Fury. “Oh, but Wilder has the green belt.” Please don’t waste my time with that bullshit. Fury dominated three quarters of a 12-round fight against the WBC titleholder and still retains his status as lineal champion. If Joshua whacks out Wilder he would have four championship belts, but a competitor of his nature will want to smash Fury to establish overall dominance. Who wins Joshua-Fury? Ask me if it ever gets made but, on the basis of Saturday’s performance, Fury’s chances against his countryman have exponentially risen.